Dogecoin (DOGE) has been around since late 2013 after starting as a joke initially. But, there are facts about Dogecoin that make it a worthwhile investment. Developed by Jackson Palmer and Billy Markus, two software engineers, in December 2013, Dogecoin’s protocol adopted the Luckycoin and Litecoin (LTC) proof-of-work algorithm (PoW). It was using the Scrypt technology.

DOGE was designed as a satirical homage to bitcoin. Apart from being a joke and a meme coin, Dogecoin was not intended to serve any investment purpose. But, currently, it can be used to transfer value.

Everything was started on Christmas day of 2013 when Dogewallet stated that its webpage had been compromised. This attack resulted in users sending their money to the hacker’s address. The nearly $12,000 worth of users’ coins that was reportedly lost in this fiasco was fully reimbursed by Dogecoin Foundation Board Member Ben Doernberg. The reimbursement comprised of community-funded donations. 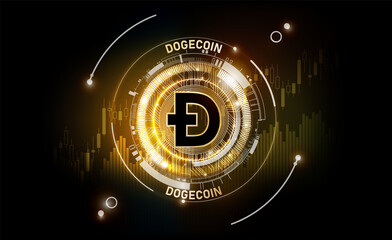 How many times has anyone heard that startups or even altcoins that focus on social network micropayments using cryptocurrency? Inspired mainly by the Bitcointip project that had operated for more than a year, the Dogetipbot service was unveiled. The service supported automatic Dogecoin tipping on Twitter, Reddit, and Twitch. Unfortunately, Dogetipbot’s creator withdrew all the funds sometime in 2015 resulting in the services bankruptcy in May 2017.

Overview Of Facts About Dogecoin

The history of this cryptocurrency began as a funny variation based on Litecoin technology. Little-known facts about Dogecoin indicate that its core is connected to a famous internet meme that represents a Shiba Inu dog that has a goofy face. But, its simple beginnings resulted in a grand success.

Up to today, the Dogecoin community keeps growing and the coin appears to have become a cult for the people that use it. This crypto is now popular and recognized among most businesses and online resources as a reliable mode of payment due to its loyal followers.

For instance, DOGE is now accepted for betting in various online casinos which makes bitcoin games an ideal alternative to other gambling activities. Other sectors that accept Dogecoin include online shopping, trading, investment, and sports betting.

The key difference between Bitcoin and Dogecoin is that DOGE has bigger potential and it does not support a hard supply limit of coins that can be possible to mine. This is one of the facts about Dogecoin that make it quite attractive for investors. But for now, not many think that it will ever surge to levels that can enable it to dethrone bitcoin from the top.

Here are some of the little-known facts about Dogecoin that make it one of the top assets in the crypto space.

Dogecoin’s community operates like a cult. This cult that surrounds the crypto attracts new users to the world of cryptocurrency more often than not. Hence, for most people, it acts as a dependable entry point to the crypto space. Moreover, Dogecoin is known to host an approachable community that has successfully pushed DOGE to cult status.

It is also important to know that the crypto is not actively maintained. Dogecoin is yet to experience many updates since 2015. Currently, the latest code update was recorded in November 2019. The network is today being secured by miners, similarly to the bitcoin network. For every block that gets mined, miners are rewarded with 10,000 Dogecoins.

Dogecoin’s blockchain operates just like all the other primary blockchains. Its blocks are integrated using a hashing algorithm and its outputs can be spent. Therefore, users can spend their DOGE funds by sending a transaction to a DOGE address.

Then, miners who operate the nodes receive and validate transactions. Any invalid transactions executed in the network are rejected. On the other hand, the authentic transactions get accumulated into blocks that are then added to the blockchain.

Moreover, Dogecoin is designed to use the PoW algorithm that Bitcoin also uses. It simply capitalizes on putting in ‘work.’ Any of the available modern computers can calculate a hash. Nothing is challenging about that since it takes microseconds to compute a new hash.

To make it a bit challenging to mine new blocks, the Dogecoin blockchain introduces a ‘difficulty’ property that is similar to the one on the bitcoin blockchain. The generated hash needs to match a particular pattern based on the “difficulty” property.

In that context, the higher the difficulty, the fewer the matching hashes are probable. Hence, it takes more time to generate a hash that would match a specific difficulty. People refer to this algorithm as Proof of Work (PoW) for that reason. Bitcoin is designed to mine a new block every 10 minutes. On the other hand, the Dogecoin network lets its miners generate a new block after every minute on average.

Bitcoin was designed to implement a hard cap for the cumulative number of BTCs that node operators can mine, pre-set at 21 million bitcoins. Currently, more than 18.6 million bitcoin have been mined. After the 21 million mark is reached, nobody can ever mine any more coins. From that point of view, the bitcoin miners will only get transaction fees for getting a matching hash.

On its part, Dogecoin takes an entirely different approach to its economic design. The coin went for an inflationary design. This is one of the little known facts about Dogecoin that enables it to enjoy an infinite supply. Miners receive a 10,000 DOGE reward for every block that they mine.

Dogecoin chose an inflationary design that replaces the lost coins. There are many cases of people losing access to their wallets, with the most recent example involving a man that lost access to his BTC wallet that contained 7,002 bitcoins.

With that in mind, there is a lot of debate about the inflationary designs (Dogecoin) compared to the deflationary designs (Bitcoin). Notably, the growth in the money supply does not automatically result in inflation. An article explaining the matter reads:

“Money supply growth doesn’t necessarily lead to inflation if there is an equal growth in the value of the goods and services in an economy. In fact, it could be argued that a productive and growing economy requires a growing money supply to support it. Though such a system can be more productive over time, it is prone to financial instability due to the difficulty in targeting inflation.”

Originally, Dogecoin targeted to reach a stable supply of 100 billion DOGE coins as their stability point. But, their supply already exceeded that number and continues to grow. That means it is quite challenging to find the right balance between inflation and usage.

The Moolah altcoin exchange said announced that it was shutting down in October 2014. It filed for total bankruptcy protection which resulted in massive price correction in the DOGE market as seen in the charts.

Some of the investors that were victimized include Dan Wasyluk and his colleagues who lost up to 750 BTC. It was a big blow because at the time not many exchanges listed Dogecoin. Moolah was playing an integral role in powering the DOGE online community at the time.

Moolah was so influential that at some point the platform’s founder “Alex Green,” managed the campaign for a NASCAR driver sponsorship. Also, he helped in financing many Dogecoin Twitter promotions and meetups.

Eventually, people found out that ‘Alex Green’ was an alias that was used by Ryan Kennedy. As more information came up, Ryan was sentenced to 11 years in jail for multiple crimes, including rape.

Even though the early days were dominated by many pump and dump exit scams, Dogecoin appears to have discovered its niche in the crypto space. It also has a strong online community with its Reddit subforum having over a million subscribers today.

Dogecoin is cheap in all aspects. The coins are cheap just like its transactions. Anyone that does not have enough money to spend in the crypto space can invest in this currency. They have in the crypto sector for quite a long time now which means that they can be trusted.

Many crypto investors are turning to DOGE since its transactions are fast. The transactions and confirmations are sent quickly. Therefore, users do not need to wait too long before they can withdraw their money, buy or sell the currency.

Elon Musk has also joined the space which may attract more investors to drive mass adoption. With that adoption, more people will accept DOGE as a form of payment and with the transactions quick, it may take up some significant share of the crypto-investment market.

Availability is what has made Dogecoin a practical choice for most investors. One of the facts about Dogecoin that make it an excellent investment is that it is widely available to almost all of the crypto exchanges and it can be traded on all these platforms.

Moreover, the number of DOGE coins is adequate for everyone to have a share of the currency’s unit. The more coins an investor buys, the higher the probability that they will earn significant amounts from it.

Since DOGE is quite cheap, losing it is not as devastating as the other types of cryptos. Thus, the beginners are encouraged to start here because losses are not as much as those that may arise from Bitcoin and the other high-value top cryptos. It is also an ideal investment opportunity for people that have limited amounts to invest in the crypto industry.

Speed is one of the facts about Dogecoin that makes it a perfect payments solution for online casino activities. DOGE gambling allows for the highest withdrawal speeds and it is also one of the safest strategies to offer online casino activities. In most cases, the Dogecoin gamblers are normally getting lower fees than the gamblers that prefer betting using fiat currencies.

Elon Musk, Tesla and SpaceX CEO has shown his interest in the crypto space and he started with Tweeting about Dogecoin. Musk endorsed Dogecoin in July 2020 which resulted in a 14% surge in market prices.

Recently, after tweeting about Bitcoin and editing his Twitter bio to include the name ‘Bitcoin,’ he started talking about DOGE once more. Musk criticized DOGE whales on February 15, 2021, for hoarding huge amounts of coins.

According to the Tesla CEO, hoarding prevents Dogecoin from growing into the ‘currency of the internet.’ Musk says that Dogecoin’s massive community gives the coin huge potential to become a real currency since there is a wide variety of people that hold DOGE coins.

Dogecoin has one of the biggest communities of all crypto projects. This is one of the facts about Dogecoin that can help the crypto become the ‘people’s crypto’ just like Elon Musk envisioned. However, it is still not a perfect candidate to become an official mainstream digital currency since it has no technical support and maintenance.

Will these facts about Dogecoin help it dethrone Bitcoin in the future?