Two years of a bear market has left cryptocurrency investors despondent and just a little sad. At this point, we’re all conditioned to expect the next downturn at any moment.

Still, 2020 has already seen some big things for crypto, and we’re expecting a major uptick at any point. Here are 8 signs that show the Bitcoin bull run has already begun.

The overall cryptocurrency market cap is setting a higher-high each month. A higher-high is an indication of an uptrend when combined with a higher-low. Right now, all we’re waiting on is a higher-low to confirm the bull run.

W.D Gann is among many traders who believe that time and geometry are major factors influencing Bitcoin’s price. Gann developed tools that allow analysts to make predictions anticipating a certain trend. Up until recently, the downtrend was locked below red, but now it’s pushed above this line.

The Parabolic SAR is an indicator that was created by J. Welles Wilder, a technical analysis expert. It’s never breached to the downside during the downtrend, which suggests that the uptrend that followed the low of $3000 was never invalidated.

The market has also recently reclaimed the mid-Bollinger band line, an indication of bullish things to come. The crypto market topped it in June 2019 but fell below it again in November 2019.

The bottom of December 2019 has caused the market to rebound back above the marker. Staying above the line is a major bullish indicator.

The Relative Strength Index, which indicates the strength of the market at any given time, has started to point upwards – showing that Bitcoin is definitely heading towards a bull run.

The MACD on monthly timeframes has seen an upward tick. Once the blue line reaches above orange, we can tell that the strength of the uptrend has increased significantly.

The MACD histogram has also passed above the zero lines, which officially supports the idea that we’re entering into a bull market. It shows that the market has bottomed, and is officially about to begin a bull run.

Last on the list of 8 signs that show the Bitcoin bull run has already begun is the Stochastic indicator. It’s officially begun to turn upward, indicating that the trend is gathering strength.

Like the MACD, the blue line crossing above the orange line highlights a bullish momentum, which will increase and hopefully carry Bitcoin to a new all-time high.

What could be causing the Bitcoin Bull Run?

There really are so many different factors that could be causing this bull run. Renewed institutional interest, the upcoming Bitcoin halving, and the soft fork expected at the end of the year are all factors.

Either way, if you want to get in on Bitcoin before the bull run hits in earnest, check out eToro – the world’s leading social trading platform.

Looking at the 8 signs that show the Bitcoin bull run has already begun, it’s pretty clear that we’re going to be in for something big. We haven’t seen a bull run of this nature since 2017 when Bitcoin reached its ATH. Since then, we’ve had a dismal two years – but things are definitely changing.

It’s clear that we’ve got some incredible things coming for us, and now the best thing to do is start accumulating that BTC. The bull run has begun. 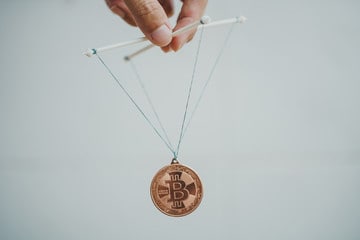 Antonopoulos Adds His Voice On The Bitfinex for BTC Manipulation Lawsuit