0Shares
Contents hide
1 In brief: If you’re looking to give your PC a new lease of life or just want to spec it to the max, Crucial’s latest and fastest NVMe PCIe P5 SSD can help achieve either of those with blazingly fast performance figures of 3,400MB/s read and 3,000MB/s write speeds.
2 Related Reads

In brief: If you’re looking to give your PC a new lease of life or just want to spec it to the max, Crucial’s latest and fastest NVMe PCIe P5 SSD can help achieve either of those with blazingly fast performance figures of 3,400MB/s read and 3,000MB/s write speeds.

Crucial boasts 40 years of Micron’s quality and engineering expertise for its new P5 SSD line up. Besides using PCIe Gen 3 NVMe for their high-speed data rates, the M.2 2280 form-factor drives feature hardware-based encryption for data security, which the company notes will not degrade performance. 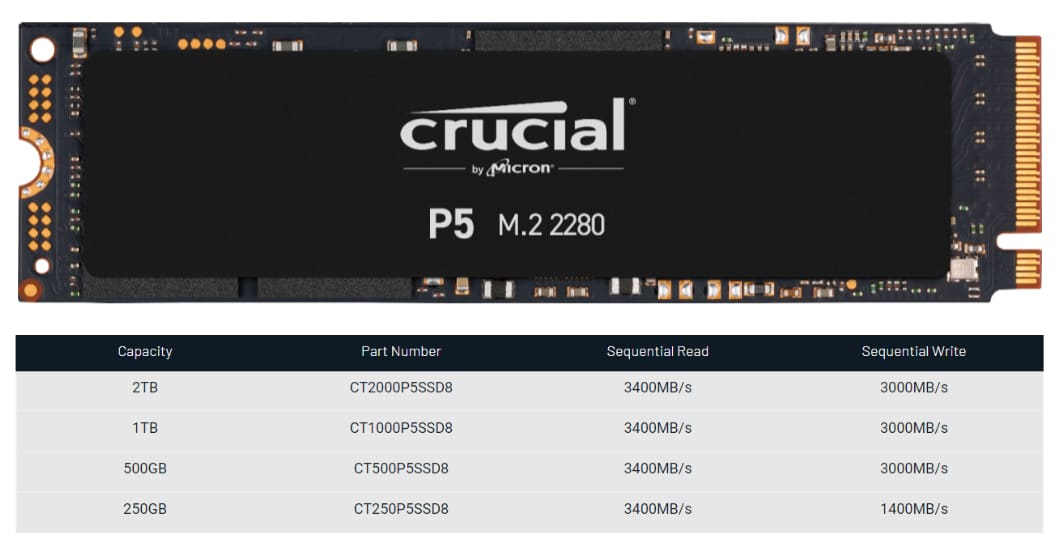 The P5’s endurance rating (number of bytes it can withstand) also follows the usual trend of scaling up with higher storage capacity and is rated at 150 TBW (terabytes written) for the 250GB model, 300 TBW for 500GB, 600 TBW for 1TB and 1,200 TBW for the 2TB version. There is, however, an important detail that’s still kept under wraps and relates to performance figures for the P5’s random read and write IOPS.

Crucial is offering a 5-year warranty on the P5 series but hasn’t yet made it available to any retailers nor revealed what it’ll cost. Although the company’s aggressive pricing is expected for this lineup as well, it will still be more expensive than the equally tempting (but slower) P2 series, which it released a few weeks back.