It’s December, and y’all know what that means. It’s a time for reflection, family and holiday cheer. A season of giving and forgiving, of stuffing yourself with holiday treats and comfort food, of uncomfortable conversations with your family members over celebratory dinners.

Maybe that uncomfortable conversation comes in the form of a political squabble, or your Uncle Jim who just won’t STFU about the reptilian people (seriously, Jim, you have to stop). Or maybe that uncomfortable conversation comes from your cousin who believes XRP is the future, or that other cousin who took out a second mortgage to buy bitcoin at $19,000.

And sure, maybe it’s a little late to get anything ordered, delivered and wrapped by Christmas morning. But whatever the holidays have in store for you this month, in early 2020 or further down the road, there are plenty of Bitcoin-themed gifts out there for the HODLer or precoiners in your life. Here are a few of our favorites.

Giving the Holiday Gift of Bitcoin

For precoiners and Bitcoiners alike, what better way to show your appreciation than with the gift of verifiable, permissionless, censorship-resistant, digitally-scarce decentralized money?

Further Reading: What Is Bitcoin?

Of course, there are multiple ways to do this. You could simply set up a wallet for your friend/loved one and send them bitcoin on the spot. There are also services that allow you to send bitcoin to someone before they own a wallet.

DropBit, for example, lets you do this with both on-chain and Lightning payments. All you need is an email or Twitter handle to send someone their first satoshis, and the app sets them up with a noncustodial wallet when they choose to accept the payment.

There’s also GiveBitcoin, a new service that timelocks your gift for one to five years in a custodial account. This service includes educational material that the newly christened HODLers can consult before withdrawing their funds after the timelock expires, teaching them the tenets of bitcoin, self-sovereignty and the ins-and-outs of this new technology.

The Gift of Bitcoin Hardware Wallets

Another great way to gift bitcoin is with a 2-for-1 via a hardware wallet. These wallets store your private keys offline to safeguard against online theft.

Further Reading: What Are Bitcoin Wallets?

For small, one-off bitcoin gifts, the OpenDime by CoinKite is a trusty default. The one-time-use USB stick becomes inoperable once the recipient breaks the seal on the wallet though, so they’ll need to move funds after they use it.

CoinKite also produces an air-gapped, bitcoin-only hardware wallet that’s top of the line. Other good options include any Ledger or Trezor hardware wallet. Each option has its own pros and cons, so to learn more, check out our hardware wallet review series to figure out which one would be just right for your giftee.

There’s no dearth of literature surrounding Bitcoin, and 2019 brought with it even more titles appealing to all age groups.

There are classics like Andreas Antonopolous’ Mastering Bitcoin and Jimmy Song’s Programming Bitcoin, both of which are rather technical in their scope and are geared toward providing applied knowledge of how Bitcoin works. Yan Pritzker’s Inventing Bitcoin is also a bit like this but would likely be more digestible for the average, nontechnical reader.

The Internet of Money, also by Antonopolous, is more theoretical on the “why” behind Bitcoin, as is Saifedean Ammous’ The Bitcoin Standard. There are plenty of other books like these, including Bitcoin Clarity by Kiara Bickers and the incredibly compact Little Bitcoin Book, which was written in cooperation by a number of authors.

Then, there’s the children’s book, Bitcoin Money, written by Michael Caras and illustrated by Marina Yakubivska for the little HODLer in your life.

Giving bitcoin, hardware wallets or literature on Bitcoin is great, but what about self-sovereignty in a box and the ability to verify your own transactions?

Plug n’ play Bitcoin nodes make this possible for even the most technically illiterate users. Both Casa and Nodl provide nodes that come downloaded with Bitcoin Core; all you need to do is plug them in and update. Nodl, as a bonus, also comes compatible with BTCPay Server, Zap, Tor and other software that you can download within the device without having to jump through any extra hoops.

The Gift of Bitcoin Swag

The gift list for Bitcoin swag is inexhaustible, but we’ll lump a few together here.

Just about any company or service in this industry probably sells stickers, t-shirts and hats. Blockstream’s store, for instance, is loaded with some of the most iconic Bitcoiner garb in the space.

There’s also art that you can buy from a number of talented artists, including Cryptograffiti, Josie, Trevor Jones and Chiefmonkey.

Guns N’ Bitcoin’s Scorpion case is a hardware wallet and pistol case combo that can take one hell of a beating (I should know: I shot, burned and mauled the thing for this review).

These are just a few examples of the myriad Bitcoin paraphernalia you can buy this holiday season, but now it’s up to you to decide what the best fit is for those important people in your life.

So, ho ho HODL, and a happy new (tax) year to you all, and may this season be merry and bright (and hopefully, for bitcoin’s price, more green than red).

Video: How To Install MyNode on Your Old Casa Node 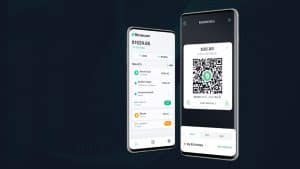