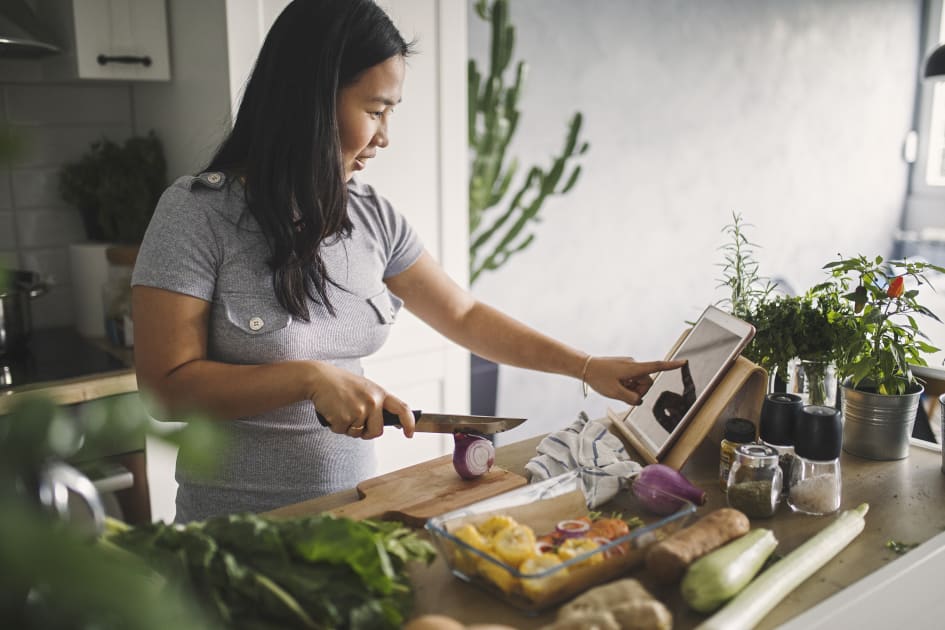 In recent years, Bon Appetit has become a YouTube sensation with over 5.6 million subscribers, thanks in part to entertaining and personality-driven shows like It’s Alive or Gourmet Makes. But beyond YouTube laughs, Bon Appetit offers highly approachable recipes that are flavorful at the same time. The website has two sub-brands; “Healthy-ish” focuses on somewhat healthier takes on food and life, while “Basically” is geared especially towards novices. Of note is a recently published guide that was specifically curated for the current crisis. In it are recipes that use five ingredients or less, for foods that freeze really well, leftover-friendly foods, comfort foods, as well as recipes focused on shelf-stable items such as beans, canned tomatoes and tinned fish.

This is the only recommendation on this list that requires payment — $1.25 a week or $40 a year — but I personally think it’s worth it. The site and accompanying app (for iOS and Android) is well-organized and intuitive to use, with bright and colorful photos along with an ever-changing list of curated recipe recommendations and suggestions. I especially like the search function, where you can not only enter in the ingredients you have on hand, but also what sort of meal you want to make (Is it for breakfast? A snack? Or dinner?) along with whatever dietary restrictions you might have. It, too, has a series of recipes that are perfect for these self-quarantine times, such as ones for pantry pasta, long-cooking stews and, yes, stress baking.

Try this: Spiced chickpea stew with coconut and turmeric (YouTube)

If you self-identify as a nerd and you’re also into cooking, you probably already know about Serious Eats. The site rose to prominence several years ago under the helm of J. Kenji Lopez-Alt, who often takes a decidedly scientific approach to cooking. Lopez-Alt has since transitioned to a consulting role at Serious Eats (he has his own vlog, which is well worth following as well), but the site remains strong under new leadership. I actually found the Serious Eats guide to coronavirus cooking to be one of the most comprehensive I’ve seen so far. It offers tips on basics like food prep and storage, as well as a slew of how-tos and step-by-step instructions for everything from breaking down a chicken to kneading your own bread.

The Kitchn is a daily food magazine that’s been around since the mid-2000s, and it frequently serves up not just recipes but also fun features like a celebrity recipe showdown (check out this recent one that compares the pot roast recipes between Alton Brown, Ina Garten, Taste of Home and the Pioneer Woman). Of course, The Kitchn also publishes plenty of tips and tricks to help readers be a better cook. Lately, it’s focused some of its content on the pandemic, such as this list of comforting recipes plus this helpful list of good pantry items to stock up on.

“Hello, I’m Chef John, from Food Wishes dot com” is the familiar refrain that you’ll hear at the beginning of every Food Wishes video, and it never fails to warm my heart. His tone is so welcoming and cheerful that it cheers me up every time I hear it. A YouTube favorite (he has over 3.4 million subscribers), he’s also a favorite among a few Engadget staffers, and for good reason. Not only is he goofy and charming, his recipes are also almost always geared toward the novice chef, with very clear and concise instructions. He also encourages viewers to experiment, use their senses, play around with food, and to think of cooking as art as much as science. A few of his more recent recipes are designed to make use of pantry staples too, making them particularly useful during this time.

“Binging with Babish” is a popular YouTube channel (over 6.6 million subscribers) which is primarily focused on recreating foods from TV shows and movies. Some famous examples include the Krabby Patty from Spongebob Squarepants and ratatouille from, well, Ratatouille. But host Andrew Rea can cook “normal” foods too, and the popularity of his channel led him to host a spin-off series called “Basics with Babish” that’s geared toward the beginner. Most recently, he also started a “Pantry Basics” series that’s meant to help you figure out what to cook with pantry staples like beans and lentils.

Maagchi has been referred to by the New York Times as the Julia Child of Korean cooking, and the description couldn’t be more apt. Not only does she have a friendly and bubbly personality, she does a wonderful job of demystifying Korean cooking and making it approachable to beginners and advanced cooks alike. From Korean classics like kimchi jjigae and bibimbap to sweet treats like Korean doughnuts, she makes it all seem within reach. Quite a lot of her recipes are already well-suited for a lockdown situation, as ingredients like kimchi and dried anchovies are pretty long-lasting, but a couple of her more recent videos have addressed the quarantine directly as well.

For a site that is entirely dedicated to vegetarian cuisine, I highly recommend 101 Cookbooks by Heidi Swanson, which has been an online favorite for decades. I’m a huge fan of her simple, straightforward recipes that are able to turn a carnivore like me into a lover of plant-based meals (a personal favorite is this cauliflower soup). Unsurprisingly, she’s been inundated with requests for pantry recipes lately, and she has obliged with this list of freezer-friendly soups. She also added this recipe for Turkish Coffee Chocolate Brownies because who doesn’t want a sweet treat during times like these?

Try this: Chickpea and Rice soup with Garlic Chile Oil

You don’t need to be on the paleo diet to fall in love with Nom Nom Paleo, a mini-empire that consists of a food blog, two award-winning cookbooks, and a podcast, among other things. The New York Times has referred to Michelle Tam, the creator of the site, as the Martha Stewart of Paleo, because of how accessible she makes it seem. After perusing her site and trying her recipes, you will no longer think of the paleo diet as restrictive; instead you might find yourself eating more than ever. Tam has also tailored some of her recipes to fit Whole30 or keto diets as well. Recently, she posted this handy guide on stocking your paleo pantry, which includes lists of vegetables with a long shelf life and online sources for sustainable meat.

If you’re not strictly vegetarian or paleo, but you still want a healthy diet, then check out the Clean and Delicious food blog by Dani Spies. A wellness and weight loss coach, Spies believes in a balanced diet and “clean eating,” but without foregoing the foods you love. For example, there’s a recipe for lemon bars on her site, but it’s made with whole wheat flour and doesn’t have dairy or refined sugar. All of the recipes on her site reflect this philosophy; they are either gluten-free, paleo, vegan or vegetarian and they are also often low-carb, keto, dairy-free or nut-free. Plus, she has lists of healthy freezer and fridge staples, which are perfect for stocking up when you’re on lockdown. I also like her Instagram and YouTube channel, where, in addition to recipes, she shares tips on managing your anxiety during this difficult time.

There are simply way too many food sites on the internet to list them all, but here are a few more that were recommended by staff that you might find useful.

For those living on the other side of the pond, you might prefer recipes with proper measurements. Both Senior Editor Nick Summers and Copy Editor Lucy Cripps recommended BBC Good Food as a UK staple. Cripps’ favorite lockdown recipe so far is this bean chili because you can make the sauce to freeze.

Cripps also likes the Minimalist Baker, which has recipes that use 10 ingredients or less and only takes about 30 minutes or so to make. Contributing Writer Igor Bonifacic is a big fan as well, mostly due to the site’s wealth of vegetarian recipes, like this curried cauliflower lentil soup.

Now that we’re all trying to waste as little food as possible, a site like Love Food Hate Waste could prove really useful. Contributing Writer Rachel England said that you can just type in an ingredient or whatever it is you have leftover, and it’ll give you plenty of related recipes that you could use said leftovers in.

Budget Bytes is another great resource for those watching their wallets, as each recipe gives you a breakdown of estimated costs for each ingredient. It also recently published this informative list of long-lasting produce to stock up on during the quarantine. Commerce Editor Valentina Palladino said that the site is also really good for beginners.

Everyone’s baking bread these days, or so it seems, and Richard Bertinet’s video on white bread comes highly recommended for its sheer simplicity. It proves that all you need to make bread is bread flour, yeast and salt. Senior Editor Dan Cooper says the video is also a sure-fire way of calming him down when stressed.