Talented digital artist, Qi Zero, explores Artificial Intelligence (AI) and Art as he announces the launch of the first of The Mutant Presidents Signature Series, a collection of 46 living paintings of the Presidents of the New States of Mutant America}}

SAN FRANCISCO, May 02, 2022 (GLOBE NEWSWIRE) — Qi Zero is bringing his expertise as a former VFX artist with credits on over 40 major studio feature films as well as his background in Virtual and Augmented reality, machine learning, and immersive experiences as a Silicon Valley engineer to bear with his debut NFT collection. Tagged The Mutant Presidents, the edition of 46 1-of-1, “Signature Edition” living paintings will be officially launched on May 2nd, 2022 on OpenSea.

“My work as an NFT artist centered on exploring Artificial Intelligence and Art – and feeling that most current ‘AI Art’ rarely seems to look like an artist was involved. So I’ve spent a lot of time building a custom AI pipeline that allows me to exercise considerable art direction over the product, enabling me to form a vision of the project and guide the algorithms in much the same way as I’d guide the work of a human art team,” said Qi Zero. “Additionally, the main series in this collection is designed not only to be viewed as the videos you see on the collection but also contains special data allowing it to be viewed as a hologram on Looking Glass Portrait.”

The global NFT market has practically exploded in recent times, cutting across several industries. However, Qi Zero aims to bring a whole new experience to blockchain enthusiasts and lovers of digital arts with the launch of The Mutant Presidents. The collection offers the Presidents of the New States of Mutant America resurrected as engineered beings by the Immortal AI.

It is 1000 years in the future and the earth’s mightiest have fallen due to several factors, such as radiation, DNA warfare, climate collapse, and mass extinction. However, an immortal AI continues to watch over it and has decided to restore humanity to the earth once again. This is the plot created by Qi Zero through The Mutual Presidents NFT collection.

The Mutant Presidents, which is the first part of a larger story that aims to chronicle the fall of humanity through art and the rise of the immortal machines re-engineering life on earth is particularly unique as a limited edition non-moving series, which is also minted with a supply of 100. Qi Zero delivers a fantastic experience to the virtual space, with his background in emerging tech ensuring an enjoyable feel on future holographic displays from other vendors.

Qi Zero has also announced plans to release more NFT projects as well as follow-on series based on the same post-apocalyptic theme of an AI supervising the return of humanity to devastated earth, and some unrelated works using ongoing evolutions of the AI algorithms he is building.

For further information about The Mutant Presidents and other works from Qi Zero, join his growing online community across social media on Twitter, Discord, and Facebook. 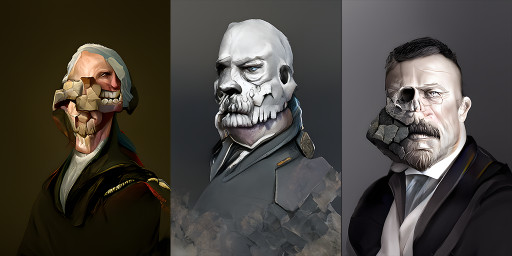