0Shares
Contents hide
1 The big picture: The Internet is now a utility in the truest sense of the world, which is readily apparent from the massive change in the way it’s used by people around the world to connect, work, and play during lockdown and social distancing.
2 Related Reads

The big picture: The Internet is now a utility in the truest sense of the world, which is readily apparent from the massive change in the way it’s used by people around the world to connect, work, and play during lockdown and social distancing.

Medical professionals at the front lines are crucial to fighting the large number of people that have been infected with the novel coronavirus. However, it’s just as clear that the Internet is playing a huge role in helping us get through this crisis by connecting people around the world, and allowing many to work, study, and shop from the comfort of our homes.

With so many people now using business and videoconferencing apps to get their jobs done, not to mention flocking to streaming services, it’d be easy to assume the Internet would bow under the unexpected surge in online activity.

If we look at Akamai, whose platform relies on 270,000 servers spread in 4,000 locations around the world, the data indicates that global Internet traffic increased 30 percent during March, or just about ten times the average monthly rate of growth. CEO Tom Leighton explains that it’s another way of saying that Akamai has seen one year’s worth of traffic in the span of a few weeks. 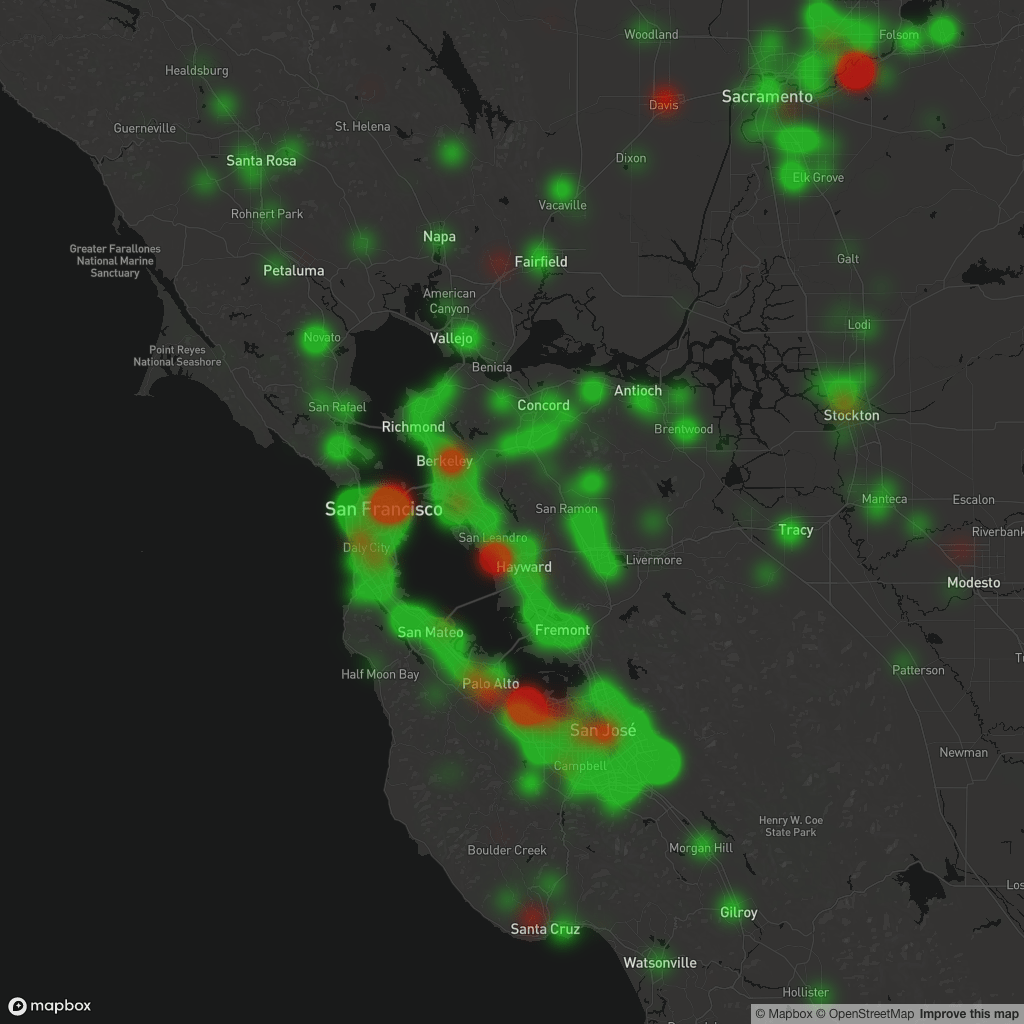 Cloudflare, another Intenet infrastructure giant, has published similar findings. It also made some illustrations that show how the pandemic has changed the way we use the Internet. An easy observation is that traffic has decreased in office buildings (red blobs on the map) and increased in residential areas (green blobs).

Overall Internet traffic in San Francisco increased over 48 percent from February 19 to March 18. A similar trend was observed in London and Paris, with traffic up over 22 percent. The effect is less pronounced in cities like Tokyo and Berlin, where there’s already a huge number of heavy Internet users.

According to Vodafone, traffic in Italy and Spain surged almost 50 percent, and peak hours also shifted — the telecom giant used to see the highest pressure on its network between 6 PM and 8 PM, but now it happens somewhere around 12 PM. These parameters are more or less the same for all 65 countries where Vodafone operates.

Video accounts for an estimated 50 to 60 percent of all Internet traffic, depending on who you ask. That’s also why the EU urged platforms like YouTube, Netflix, and others to reduce video bitrates to reduce the strain on infrastructure. In the US, ISPs like Comcast made its Wi-Fi hotspots free for everyone and waived its data caps for broadband customers. 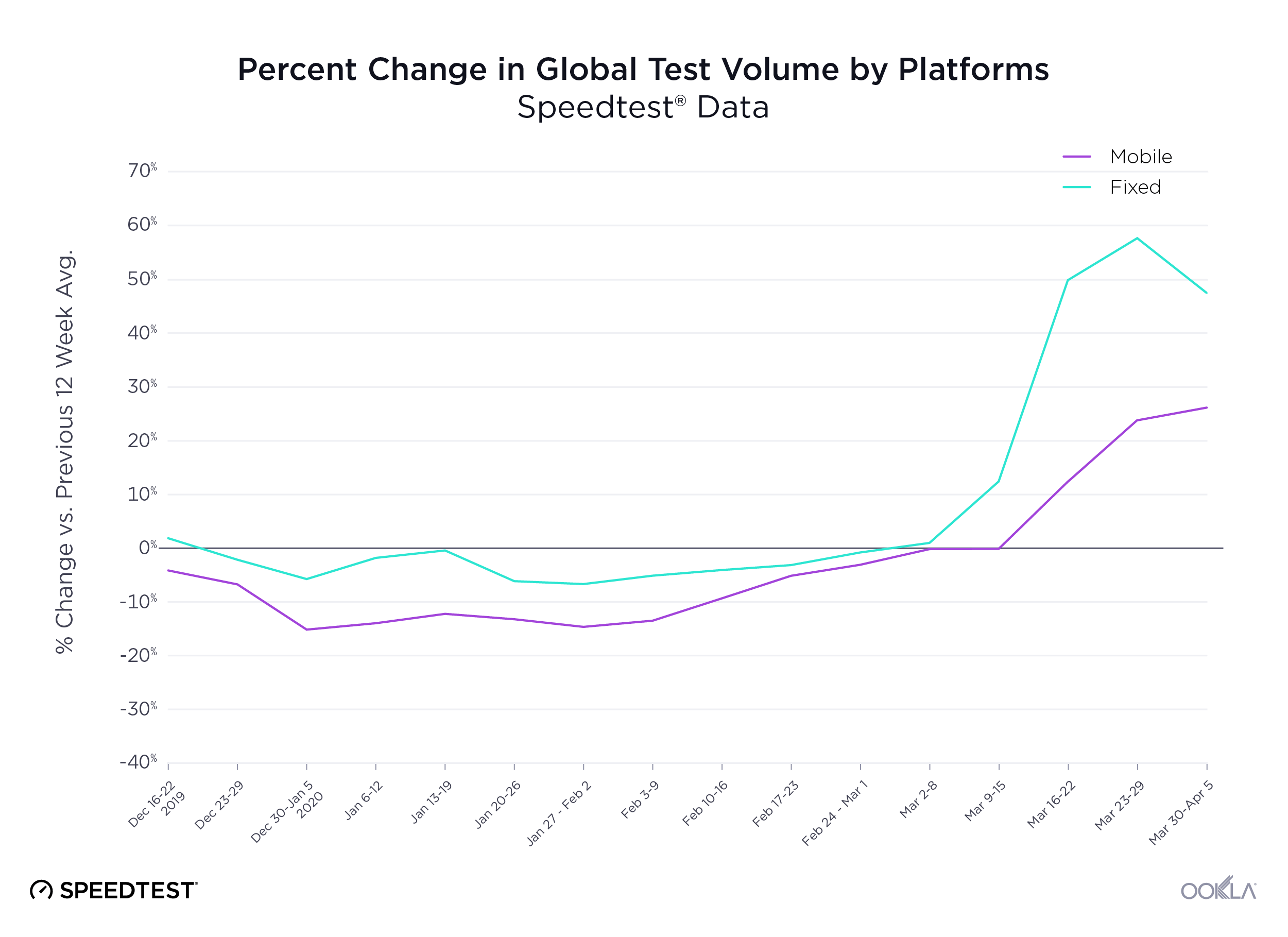 Ookla, a company that monitors Internet connection speeds, says it saw a steady but slow decrease in fixed broadband speeds throughout the second half of March and the first week of this month. Mobile broadband saw a negligible change in average speeds around the world, which is in line with the observation that right now people tend to use computers more than smartphones.

And while telecom companies say there’s enough bandwidth to keep up with the increased demand, MIT Technology Review says ISPs and companies like Netflix and Equinix are scrambling to bolster network and server capacity just in case. Furthermore, we wouldn’t have had this robust mesh of Internet infrastructure in the first place if there wasn’t for retail giants like Amazon and cloud service providers like Dropbox and Microsoft who needed to build it.

As these companies expand their global presence, they also invest heavily in content delivery networks, which are essentially shortcuts to last-mile broadband providers like Verizon and Comcast. This ensures that consumers get access to an Internet pipe that’s dedicated to specific services and are able to go around some of the limitations of using the public infrastructure.

The pandemic may interfere with supply chains for network and server equipment, which could hinder these developments. Then you have developing regions in Africa and rural areas in the developed world that have far less access to broadband connections, which means those people will be at a disadvantage.

Still, Cloudflare CEO Matthew Prince thinks the Internet trumps every other utility, including electricity and transportation, in the ability to handle a massive and sudden increase in usage.