The Company will Put Universe of NFTs, Blockchain and Web3 on Full Display at Interactive Experience Showcasing Innovative Products and Previewing Future of Entertainment,

Content Distribution and Disintermediated Bond Between Artists and Fans

to Drop NFTs and Provide POAPs for Fans at Festival Performances and Screenings;

to Release NFTs of Songs During Festival

Strategically designed to serve as a centrally located venue in the heart of SXSW, through a series of installations, Blockchain Creative Labs @ SXSW will put NFTs, blockchain and Web3 on full display for Festival-goers at an interactive experience that will showcase innovative products, preview the future of entertainment and content distribution, and demonstrate the power of disintermediated bonds between artists and fans.

Open from 9 a.m. to 5 p.m. CT and 8 p.m. to 11 p.m. CT from Friday, March 11, to Sunday, March 13th, activations set to reside at Blockchain Creative Labs @ SXSW include an extensive gallery of NFTs created by leading content creators, exclusive NFT drops of music from official SXSW artists, NFTs from feature films premiering during the Festival and a number of thought leadership sessions featuring leading technologists, creators, artists, executives, marketers and academics discussing the future of blockchain and the metaverse.  All SXSW badge holders and the general public are welcome to attend the experience and can gain access by RSVPing at bcl.xyz/sxsw.

“Since launching Blockchain Creative Labs last year, SXSW has served as an important mile marker for our company as a time and place where we would host the creative and tech sectors to bridge together traditional media and Web3,” said Scott Greenberg, CEO of Blockchain Creative Labs.  “Blockchain, NFTs and the metaverse will be driving themes of SXSW this year, and we look forward to welcoming guests to BCL at 5th and Trinity to share ideas, debate best practices, learn from one another and together help pave the path forward for the industry…while having a lot of fun during the process.”

As SXSW’s Blockchain sponsor, this year’s roster of artists and filmmakers at the festival are able to tokenize their work via BCL’s concierge services and technology and make them available for purchase by fans at the SXSW x BCL NFT marketplace, sxsw.bcl.xyz, starting March 11.  As part of BCL’s strategy and mission to expand mainstream adoption of NFTs and the blockchain, company representatives also will assist in onboarding guests visiting Blockchain Creative Labs @ SXSW who are looking to step into Web3.

At the heart of Blockchain Creative Labs @ SXSW is the BCL_NFT_Gallery, which will celebrate and drop a series of diverse and new NFT art, music, movie posters and other content from such creators as global superstar and Rock & Roll Hall of Fame nominee Dolly Parton and her Web3 experience, welcometodollyverse.com; Bento Box Entertainment’s TikTok studio, A Studio; FOX’s upcoming animated comedy, KRAPOPOLIS, from Dan Harmon; “The MaskVerse”; and more.

BCL is collaborating with filmmakers to take their original SXSW premiere posters and immortalize them as one-of-one NFTs that will be available on the SXSW x BCL NFT marketplace.  Films to feature poster NFTs on the marketplace include the documentaries “Still Working 9 to 5,” “Mama Bears” and “The Pez Outlaw”; “Seriously Red,” starring and executive produced by Rose Byrne; “It Is In Us All”; and “A Lot of Nothing,” co-written and directed by Mo McRae – all of which will be dropped during the SXSW Film Premiere NFT “Countdown-to-Minting” Poster Party on Sunday, March 13.

Moreover, BCL will create POAPs (Proof-of-Attendance-Protocols) for a number of  SXSW venues, including Mohawk, Antone’s, Stubb’s, Alamo Drafthouse South Lamar, Violet Crown Cinema, Stateside at the Paramount and SXSW Film Theater at the Austin Convention Center, for fans to get rewarded with a free and unique way to remember their attendance at shows and screenings throughout the Festival on the blockchain, enabling artists to establish and nurture their fan communities and monetize their content well after SXSW.

As part of the Gallery, BCL is also hosting the London-based start-up øxArt, a Web3 platform bridging the traditional and digital art worlds by facilitating physical art to be marketed and traded as NFTs on the blockchain. At SXSW, øxArt will launch the first curated exhibition of physical art sold via NFT Deeds that serve as certificates of ownership. The collection, entitled “Pioneers,” previewed last week in London.

SXSW attendees are invited to discover artists performing at SXSW via the blockchain at the BCL_RecordBlocks station, which will drop NFTs of songs from more than 30 acts, including Grammy Award nominee KT Tunstall, Electra Mustaine, Kovic and Callie Twisselman, among others.

The BCL_Web3_Exchange will be an intimate and decentralized sharing of ideas between Web3’s best and brightest in tech and entertainment through a series of fireside chats, discussions, debates about the future of blockchain and the metaverse.

Topics included on the BCL_Web3_Exchange range from how Web3 impacts Hollywood to a behind-the-scenes look at FOX’s new docu-comedy WELCOME TO FLATCH with executive producers Paul Feig (“The Office,” “Bridesmaids”) and Jenny Bicks (“Sex and the City,” “The Greatest Showman”), stars Sam Straley and Holmes, and Michael Thorn (President of Entertainment, FOX Entertainment). There also will be a discussion on the future of Web3 entertainment with WWE superstar Charlotte Flair, WWE executives and Robert Gottlieb (Executive Vice President, Marketing, FOX Sports).

To discuss how musicians and fans can become co-collaborators in an artist’s success, Emily Parker (CoinDesk) will moderate a talk with Vanessa Magos (Vice President of Business Development, Medallion), Charlie Durbin (Co-Founder, Decent), Nait Jones (Head of Growth, Royal) and Mark Kovic (an independent artist who assists with marketing for Dolly Parton and John Legend).

James Young (CEO, Collab.Land) will lead a conversation on how decentralized autonomous organizations (DAOs) can enable a new and different form of work outside the context of corporate systems, while Michelle Munson (CEO, Eluvio), Avner Ronen (VP of Product Development, Samsung Electronics) and Lesley Silverman (Head of Digital Assets, UTA) will discuss how Web3 is going mainstream.

The BCL activation will also highlight the SXSW x BCL NFT Ledger, an infinite, immersive, room-scale, real-time visualization of all SXSW-related data on the blockchain during the ten-day festival that will be minted into an NFT and shot into the metaverse.

Also at SXSW, BCL and Dolly Parton will launch welcometodollyverse.com — an audience-centric Web3 experience that will allow fans to purchase official and certified Dolly NFT collectibles, including limited-edition NFTs of her new album Run, Rose, Run and a limited series of Dolly-inspired NFT artwork. To promote her novel, album and “Dollyverse,” Parton will make her first-ever appearance at SXSW on Friday, March 18, when she will give a live performance featuring songs from Run, Rose, Run, along with a few of her hits.  The entire event will be streamed live for free on “Dollyverse” by BCL and Eluvio.  In-person attendees at Parton’s performance will be able to claim a free NFT, while fans streaming the event will be able to receive tokens authenticating their participation.

Before arriving in Austin, join the conversation around NFTs at SXSW on Discord: https://discord.gg/sxswnft. 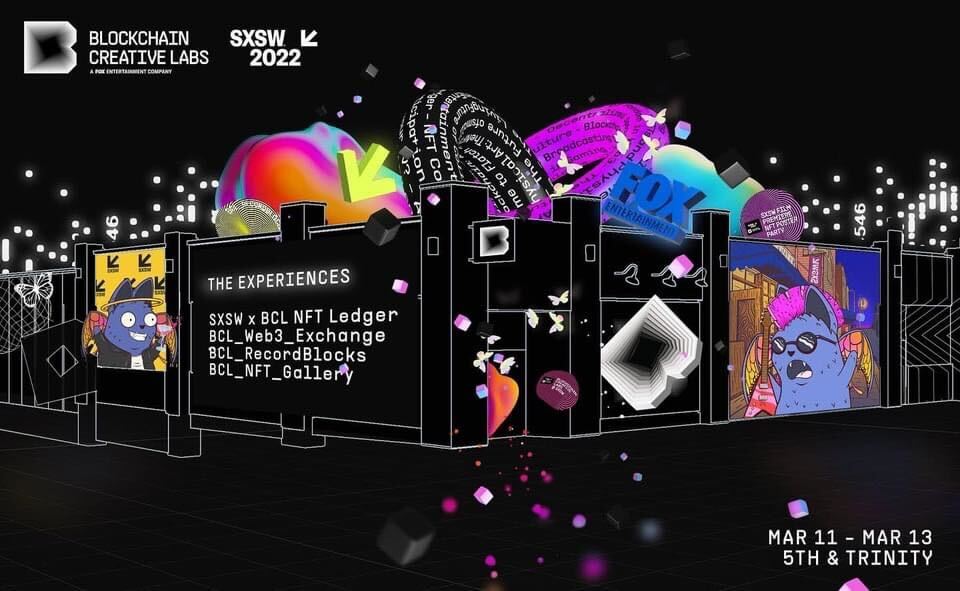 0Shares
Blockchain Creative Lab
Previous PostIMA Financial Group Unveils the Metaverse’s First Insurance Research & Development FacilityNext PostWhat Is A Stem Player and What does it do?