Having dropped out of the race for leading-edge manufacturing technologies in order to focus on specialty fabrication processes, GlobalFoundries has pinned some big hopes in manufacturing RF-SOI chips for various 5G applications, as well as FD-SOI chips for low-power devices. This week the company signed a memorandum of understanding (MOU) with GlobalWafers Co. (GWC) to develop a long-term supply contract for 300 mm SOI wafers, GloFo’s second long-term SOI wafers supply agreement (WSA) in less than a year.

Once primarily used to build leading-edge processors, silicon-on-insulator (SOI) technology is used today for a wide variety of applications, including those that need an ultra-low power consumption (SoCs and MCUs for IoT applications), high voltages (analog/mixed signal), or high resistivity (4G and 5G front-end modules [FEMs] for smartphones). All of these are made using so-called specialty manufacturing technologies, and to that end they are of tremendous interest for GlobalFoundries. Meanwhile, considering the rise of 5G and IoT, RF-SOI and FD-SOI are the most promising technologies when it comes to producing the necessary chips in high volumes. 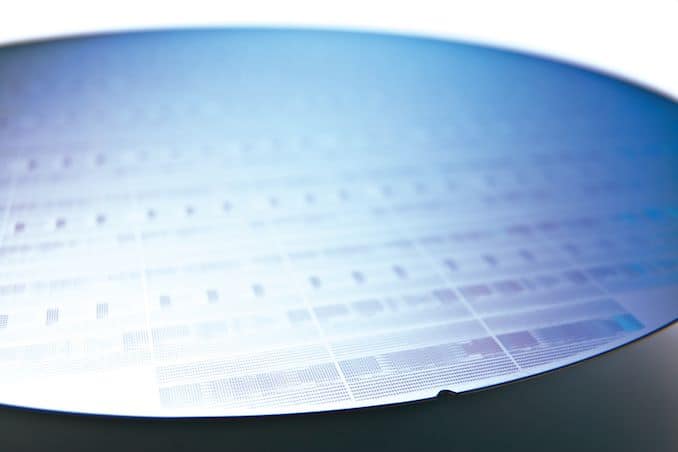 Nowadays, GlobalFoundries operates seven fabs: four 300-mm fabs (including the Fab 10 in East Fishkill, New York) and three 200-mm fabs. The company’s largest 300-mm Fab, Fab 1, is used exclusively to make SOI products, Fab 7 in Singapore uses both bulk and SOI technologies, and Fab 10 can also process wafers using SOI-based processes. In addition, GlobalFoundries is building another 300-mm fab in Chengdu, China, which will also be used to make chips using its 22FDX technology. Finally, the foundry’s 200-mm facilities can all use SOI wafers as well.

Being the largest consumer of SOI wafers in the world, GlobalFoundries sources 200-mm and 300-mm substrates from both Soitec, the world’s largest producer of SOI wafers, as well as GlobalWafers Co. In fact, in just the last year GloFo and Soitec signed a multi-year 300-mm SOI wafer supply agreement, which builds upon a WSA signed in 2017. As it turns out, GlobalFoundries needs even more 300-mm SOI wafers for its advanced RF SOI technologies, so the company is going as far as agreeing to help GWC ‘significantly expand’ its SOI wafer manufacturing capacity as part of the new contract.

GlobalFoundries, Soitec, and GlobalWafers Co. naturally do not disclose how many wafers are consumed by the chip maker. Regardless, it looks like we are talking about a significant expansion of SOI usage at GlobalFoundries.

“Mobile, wireless, and 5G represent a significant opportunity for GlobalFoundries, and our vital RF technology is featured in more than 85% of smartphones on the market today. We are pleased to collaborate with GlobalWafers, and look forward to working with them to develop and qualify an additional supply of 300mm SOI wafers to integrate into our manufacturing processes and help meet the growing demand for our RF SOI solutions.”

“Given our market position, it is in our best interest – and the best interest of our clients – to build out and diversify the supply chain for 300mm SOI wafers. GlobalWafers is the right partner for us to make this happen.”