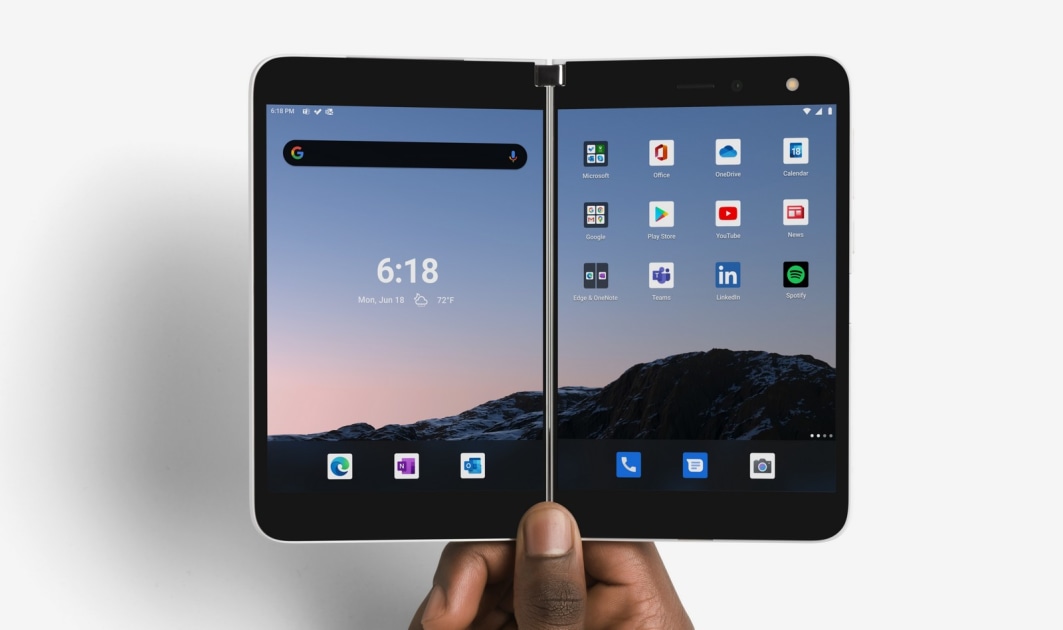 Still, as intrigued as I am, I can already see a few potential issues with the Surface Duo. For one, typing might be a bit annoying in certain orientations. If you click a text field on the left screen in booklet mode, you’ll get a one-handed keyboard that’s aligned to your left thumb. That seems like a good idea, but I can’t imagine typing much with a single finger, and it seems too awkward to lean over with your right hand. Instead, you’ll have to flip the Duo around into landscape mode to get a large keyboard suitable for both thumbs. You can also use any Surface Pen to jot down notes, but that’s something you’ll have to buy separately and carry around in your pocket, since there’s no way to attach it to the Duo.

Microsoft is also going directly against the multi-camera smartphone trend. The Surface Duo just has a single 11-megapixel shooter located above its right screen. It looks a typical front-facing lens — to use it as a rear camera, you just have to fold the screen back. While Microsoft says the Duo has a portrait mode and can shoot multi-frame HDR photos, that’s all software based. It won’t be able to take advantage of different lens lengths like other premium smartphones. There’s no mention of any night shooting mode either, so you can likely forget about decent low-light performance. While Microsoft could still end up surprising us with the camera, the specs don’t give me much hope.

The Surface Duo might also seem a bit quaint now that Samsung has unveiled the Galaxy Z Fold 2, its third attempt at making flexible phones work. But Panay, ever the company man, thinks there’s a very clear reason why Microsoft opted to build devices with two separate, hinge-connected displays. “I do believe in windows,” he said. “I believe in windowing.” The company has found that users multi-task differently when they can organize their work across two separate displays, instead of a single screen. And of course, it also helps that the Duo is much cheaper than the original Galaxy Z Fold, which cost well over $2,000 (we still don’t know the pricing of the Z Fold 2). The $1,380 Galaxy Z Flip is a bit more reasonable, but it’s smaller screen isn’t nearly as useful as the Surface Duo’s.

You can pre-order the Surface Duo at the Microsoft Store, AT&T and Best Buy. It’ll also work on T-Mobile and Verizon’s networks, if you nab an unlocked model.