Immutable X is the first layer-2 protocol in Ethereum. The platform is designed to mainly focus on NFTs and it features zero fees and instant trading. The huge costs incurred in minting non-fungible tokens (NFTs) on Ethereum appear to be a major roadblock preventing the assets from reaching mainstream use.

Nonetheless, Ethereum 2.0 is still several quarters away from integrating with the mainnet. Today, the immediate solution seems to be layer-2, and that is what Immutable X is developing currently. It has created a platform that can enable NFTs to thrive on Ethereum and make it readily accessible to more creators.

Known as Fuel Games previously, Immutable developed Immutable X to serve as a scaling solution for the blockchain giant Ethereum. The co-founder, Robbie Ferguson, is convinced that NFTs have a massive potential going into the future.

However, the real power can just be tapped by making the minting process affordable and free for every digital asset creator.

What Is Immutable X?

Immutable X is described as the first layer 2 protocol in Ethereum that primarily focuses on NFTs and features instant trading, zero fees, and a secure platform. Moreover, it is also an open-source protocol that offers users a chance to develop and create their decentralized applications (dApps), including games and marketplaces.

Furthermore, Immutable X boasts 600x more TPS or transaction per second than any other notable Ethereum-based NFT marketplaces. That means both users and gamers would not experience any interference within the platform.

The layer 2 protocol for trading Ethereum NFTs provides users with instant trade confirmation, massive scalability of 9,000 transactions per second, and zero gas without compromising any user ownership. Immutable X’s target is to make trading and minting of nonfungible tokens easier than trading the traditional digital assets.

In general, this layer 2 scaling solution leverages the power and security of the Ethereum blockchain, instead of competing against it. Here is what the platform offers its users.

The exchange is the platform’s in-house marketplace although it was referred to as an Immutable X Exchange. It is described as a peer-to-peer platform that provides zero gas fees and top speeds of 9,000 TPS. These features are ideal for the gamers since every second counts in their gameplays because any delays or interference may result in huge negative results in their quests and eventually game standings. 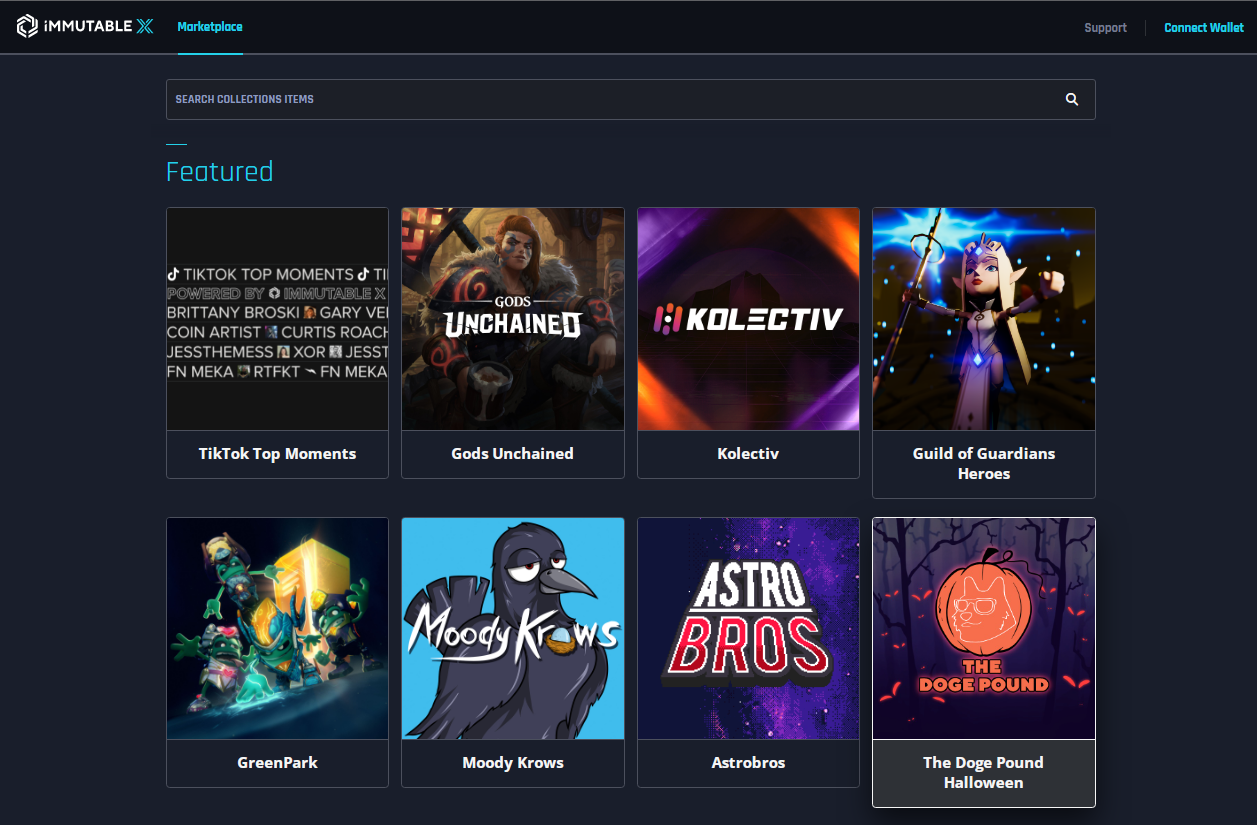 The Exchange is valuable for gamers, artists, and traders since it enables them to execute non-custodial trades. In that context, the beauty of these features is that it offers users more power since it retains the users’ ownership of their NFTs’ private keys.

Additionally, the marketplace supports ERC-721 and ERC-1155, offering users an expanded option and flexibility in managing their nonfungible token assets.

Immutable X equips the users with the capability for the development and huge-scale distribution of nonfungible tokens, and whether the users mint one or bulk item, this platform can execute all minting processes free from any charge.

Furthermore, NFTs that are minted on Immutable X are instantly available to trade on the open market while also maintaining the high-quality security that is provided by Ethereum.

Immutable X Link works as the user’s connection between their private key on the main blockchain of Ethereum and their Immutable X key on the L2 exchange. It has the same functions and operations as the Ethereum wallet manager since it can also execute the same validation and authorization functions within the exchange.

After everything has been validated, they will then get transferred to the main blockchain.

While scalability is always technologically possible with blockchains, one significant hiccup it develops is decreasing decentralization, thus, compromising security greatly. To resolve this challenge, Immutable X and Starkware, a software that utilizes zero-knowledge with cryptographic proofs, have worked together to enhance the blockchain’s scalability and privacy.

The Immutable X platform can smoothly execute large-quantity batches of trades off-chain with the users signing for the speedy process and all the transactions will then be published on-chain in one proof that ‘squeezes’ these trades into a single transaction at a fixed gas cost.

Although gas fees exist, Immutable X pays for these fees, making this process virtually free for the users.

What does liquidity on blockchains mean? It means that you can sell and buy any asset on the blockchain for an affordable and reasonable price. That is what the Immutable X platform allows users to do. It has maximized liquidity which enables the creation of virtual fungible markets according to subsets of the tokens’ characteristics.

For instance, in case you have a Rare Quick Quail VeeFriends nonfungible token, you can search for this asset using single terms like Quail, Rare, and VeeFriends NFT. It is also allowed to list assets in all the markets according to all the single traits concurrently.

Listing assets in all these markets simultaneously enables the users to get the maximum price and most liquidity. Today, in case one is a buyer, they can get exactly what they want, at the most affordable price, and maximum liquidity.

Experts say that using validity-based proof means that the users’ assets cannot be readily traded without their authorization. Thus, their virtual items cannot be taken from them and that is the same security measure that Ethereum mainnet installs and deploys for its platform.

ZK Rollup is described as a Layer 2 option that bundles thousands of transactions into one that is then separated by smart contracts to validate every transaction. Notably, its advanced strategy majorly lowers the storage and computational demand in the validating blocks, offering cost-efficiency and new execution for blockchain transactions.

It also utilizes a zero-knowledge proof strategy for publicly recording transactions on Ethereum and enables nearly unlimited scalability and rapid transactions without having to give up any aspects of its security.

IMX is an ERC-20 token that was primarily developed to help in increasing the platform’s growth by offering rewards like protocol adoption and trading transactions. IMX is designed as Immutable X’s native utility token.

The incentives that come with the IMX token are reserved for community members that are enabling Immutable X to become a scalable nonfungible token ecosystem for Ethereum. This token has 2 billion coins in total supply offering the platform users the power to vote on the future roadmap of Immutable X.

However, a major thing to highlight in this context is that the platform is not a decentralized autonomous organization (DAO). Eventually, it means that the final decision about the direction that Immutable X takes will mostly depend on the team.

Furthermore, the token is not issued by Immutable X itself but by an independent Token Foundation. This strategy means that the team of developers would not have any privilege to get a segment of the token distribution.

Reports indicate that the platform is set to release a staking reward pool that would enable the users to have an extra income stream by staking their IMX tokens.

Several NFT collections are already powered by the Immutable X platform. Some of the most notable include:

Moody Krows is defined as a collection of 10,000 images of eye-candy crows that are randomly generated. They feature creative outfits and aesthetic elements, which describe their unique personalities. Interestingly, it is the first PFP collectible in Immutable X. This means that it enables the buyers to use their usual MetaMask and ETH with zero gas fees.

The platform is expected to launch its “Krowmunity Wallet” designed to reinvest sales back into its platform to guarantee longevity and growing benefits for all community members. Interestingly, the collection has what it calls “Moody Pebbles,” which are believed to be rare collectibles with different rarities and can be acquired by buying a Moody Krow NFT crow. 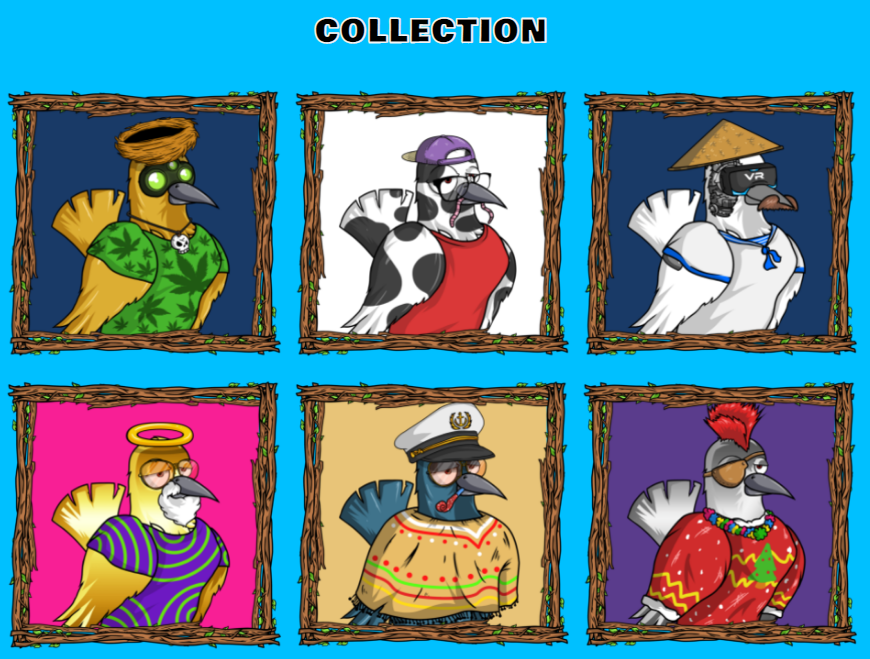 These crows will then have to scavenge the pebbles found within their metaverse, but the NFT owners can passively acquire a pebble through several drops planned in the coming months.

Landloot is described as the first-ever project Launchpad active on Immutable X. In that context, all members will have the chance to vote for the projects they would want to be launched on the platform, and notably in its mechanism, meaning that 1 NFT is equal to 1 vote.

Apart from voting, the members can also utilize their nonfungible tokens to support their favorite projects in other means, which, in turn, would offer them various exciting rewards. Landloot will leverage Immutable X’s marketing channel and software technology to help third parties in launching projects on the platform.

AstroBros features a collection of 10,000 space-themed muscled characters. Each of these characters possesses a unique combination of backgrounds, poses, items, and accessories, which makes each of them highly valuable.

As was previously mentioned in other NFT collections, AstroBros also benefits from Immutable X’s capability to deliver zero gas fees, and with this perk, the collectors would mostly be encouraged to buy more characters.

Among the long-term plans of AstroBros is to increase its nonfungible tokens’ use cases, marketplaces where the strong and muscled space-farers can be resold, and the ecosystems where it could operate.

Immutable X has appeared to open a floodgate of new opportunities by enabling the NFT creators to mint their creations without incurring any fees. All that became possible via the smart use of different technologies and the team of developers have always believed in the power of digital assets.

OKB (OKB) $ 44.46
We use cookies to personalise content and ads, to provide social media features and to analyse our traffic. We also share information about your use of our site with our social media, advertising and analytics partners who may combine it with other information that you’ve provided to them or that they’ve collected from your use of their services.
Accept
Read more
Change Settings
Cookie Box Settings
Cookie Box Settings