New York, NY,- Wall Street Chads (WSC) is the first NFT project of its kind to provide a community-run decentralized investing platform. Wall Street Chads was developed to redefine community investing and elevate retail investing to the next level. The project was inspired by the notorious Wall Street Bets subreddit, which ushered in the ‘meme-investing’ boom and coordinated one of the greatest short squeezes in history. 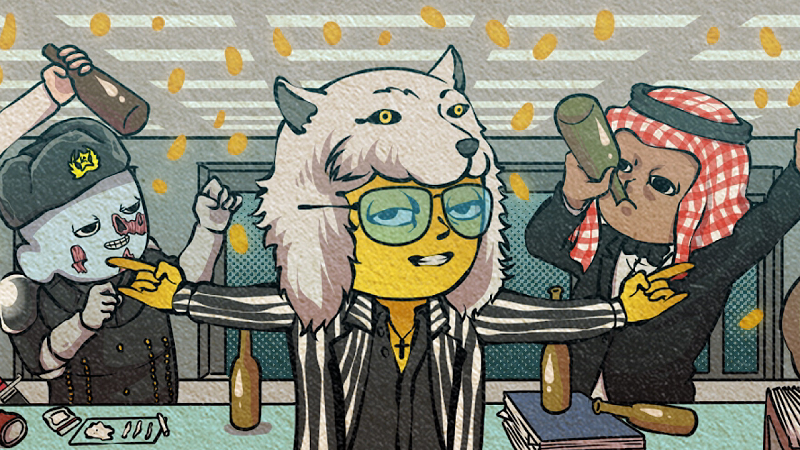 The Corpo-Net, a gated NFT-holder-only portal built on Web 3.0 and blockchain technology, enables WSC community members to create investment proposals, vote on them, and successfully coordinate a group investment strategy based on community feedback.

Currently, the Corpo-Net is fully operational and has begun accepting investment suggestions from the community. The WSC treasury, which is dubbed ‘ToDAOMoon.eth,’ has been financed with 50% of all funds generated at mint in addition to half of the royalties from secondary markets. Moreover, the company intends to raise funds for the treasury by issuing future derivative collections, while also planning to issue their own token ($WSC) and distribute it to NFT holders through airdrops.

Furthermore, the collection comprises 3,333 procedurally created and distinct characters, or “Chads,” that live and thrive as ERC-721 tokens on the Ethereum blockchain. These Chads were highly influenced by the atmosphere of the film “The Wolf of Wall Street” as well as the WallStreetBets avatar, the “F**k Boy.”

It was a great accomplishment for WSC to launch their DAO (Decentralized Autonomous Organization) and create the first ever NFT-backed community-run investment platform. The team created the whole infrastructure to enable capabilities for decentralized investment proposal issuance and voting using a hybrid on-chain and off-chain technology. They also created a slick dashboard to show all of their treasury assets as well as the performance of particular proposals.

In terms of future objectives, by releasing future derivative collections and issuing their token $WSC, the team will strive to further build the community and treasury funds. They also intend to become the best financial knowledge centre, where members may learn from one another as well as from various industry professionals and experts.

WSC launched their project back in July of last year, and it has since remained under the radar until now. After the debut of the Corpo-Net, there has been a widespread surge in interest. The community is made up of retail traders, entrepreneurs, Wall Street executives, investment bankers, and general NFT aficionados who share their knowledge with one another. A few blue-chip NFT holders, such as BAYC members, are also members of the community.

Lastly, WSC also pioneered the Trade-To-Earn (TTE) concept, in which customers earn more if their trades are successful. For more information and regular updates, check out the official website, litepaper, and WSC’s Twitter and Discord channels.

Dogecoin (DOGE) $ 0.063766
We use cookies to personalise content and ads, to provide social media features and to analyse our traffic. We also share information about your use of our site with our social media, advertising and analytics partners who may combine it with other information that you’ve provided to them or that they’ve collected from your use of their services.
Accept
Read more
Change Settings
Cookie Box Settings
Cookie Box Settings