SYDNEY, Australia, Sept. 08, 2021 (GLOBE NEWSWIRE) — The TITANDAO community announces that it will soon launch its governance token to support its mission of “Make TITAN Great Again”. TITAN became an overnight meme coin success after Iron Finance suffered the first bank run in crypto. Legions of TITAN holders united under TITANDAO to bring TITAN back from the dead. 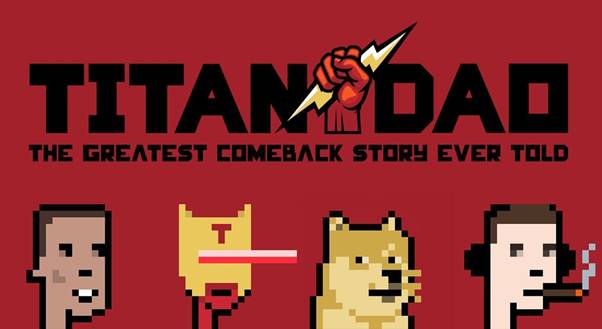 TITANDAO, supported by its ‘TITAN is our DOGE’ social channels, has successfully 180’d the fortunes of TITAN and its huge community of more than 100,000 holders. In less than 3 months, TITANDAO has grown a thriving, loyal community on Telegram and Twitter, all buoyed by the huge potential of this once written-off crypto giant.

Iron Finance, the original creator of TITAN, has burned its minting keys and endorsed the TITANDAO community as the new custodians of TITAN when they renounced its ownership on Twitter. A community initiative started by Cryptonak, one of the many affected by the first crypto bank run. Refusing to be beaten, he moved quickly to create the ‘TITAN is our DOGE’ social channels where a strong following soon emerged, fueled by memes about Mark Cuban and Elon Musk. Cuban publicly tweeted his frustration at allegedly falling victim to the crash. While Elon’s obscure tweet, “T is the new D” was impeccably timed to be taken advantage of as “TITAN is the new DOGE”, and fuel speculation around TITAN’s comeback story. Not to mention his affinity with TITAN’s new inspiration: Dogecoin. The biggest meme coin in crypto and now, its biggest rival.

The greatest comeback crypto story was in full swing, driven solely by volunteers. The TITANDAO team quickly released a merchandise store and a Jackpot game that started the process of burning TITAN. The latest product launched was the TITAN Punkz, a NFT series inspired by the original Crypto Punks, which tells the TITAN comeback story to date. All 20,000 Punkz sold out in just 3 days, with 11 billion TITAN burned in the process. Holders of rare Punkz will enjoy future benefits in the TITANDAO ecosystem such as early access to products and services.

TITANDAO is launching its governance token to operate as a DAO (Decentralised Autonomous Organization) that is owned and governed by its community. The token will play a pivotal role in growing and engaging the community via on-chain governance voting. It will offer financial support and incentives to new product releases that will drive the next growth phase of the price recovery of TITAN. The governance token will also be used to increase awareness of TITANDAO and drive the 100,000 plus TITAN holders to support TITANDAO’s mission: “Make TITAN Great Again”.

Crypto and finance expert, Raoul Pal, Co-Founder and CEO of Real Vision, recently stated on The Defiant podcast, with Camila Russo that, “Community tokens will be bigger than DeFi”. Further commenting that, “All meaningful innovation in the crypto space is now happening on the Ethereum network and it is the clearest bet for the next 12 months.” TITAN is a community owned token, and with the release of the governance token, its future will be controlled by its community like no other project in the crypto space.

In a very short period of time, the fortunes of TITAN have been restored, and a once very bleak future is now full of hope. TITAN lives freely on Polygon, a layer 2 Ethereum scaling solution with next to no transaction costs. A true community token, with a great story and massive potential. Join their telegram channel to learn more about the TITANDAO community and how to earn its governance token.

MSI crams an unlocked, desktop-class Core i9 into its new laptop