0Shares
Contents hide
1 With the Launch of a New Cost-Efficient NFT Marketplace
2 The new marketplace is built on the XRP ledger solving the high cost and slow transactions of current NFT marketplaces on the Ethereum blockchain.

With the Launch of a New Cost-Efficient NFT Marketplace

The new marketplace is built on the XRP ledger solving the high cost and slow transactions of current NFT marketplaces on the Ethereum blockchain.

Sologenic Development Foundation announced their decision to develop a new NFT marketplace on the XRP ledger which benefits users with extremely lower transaction costs to mint, bid, and trade NFTs on the existing Sologenic DEX.

In order to engage the community to participate in the ecosystem and proposed governance utilities, the Sologenic Development Foundation has decided to unlock 200,000,000 SOLO and conduct an airdrop to the XRP and/or SOLO holders globally. At the time of this press release, the spot price of SOLO is $1.44 USD making this Airdrop one of the largest airdrops that have even been distributed in the crypto space. This airdrop will be sourced from the tokens that are currently locked in the SOLO Community Fund (SCF), and SOLO Expansion Fund (SEF) which were designed to build and expand the SOLO community when the ecosystem was launched in early 2020. 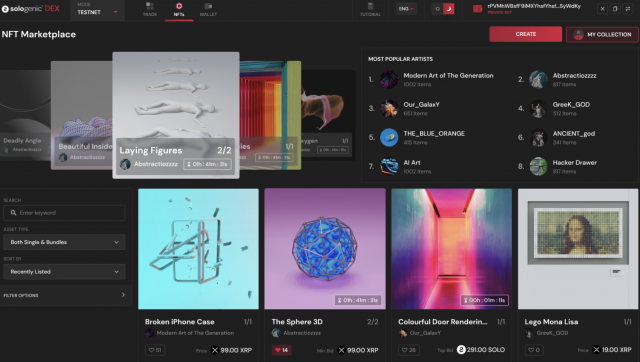 The snapshot is scheduled to be taken on December 24th, 2021 at 20:00 UTC from all the XRP and/or SOLO wallets that have created a Trustline with the Sologenic oracle. Users can simply hold their assets on the supporting centralized exchanges or create a Trustline directly from their own private wallets to claim the airdrops.

With the low transaction cost of around $0.000005, the Sologenic DEX has gained a lot of popularity among the XRP and SOLO community to trade various crypto assets and even fiat through different gateways that issue stable coins on the XRP ledger such as Bitstamp and Gatehub. At the time of this press release, the Sologenic DEX has over 10M page views monthly with over 350K transactions going through the DEX on a weekly basis.

The Sologenic DEX is an advanced decentralized trading platform that allows users to trade (peer-to-peer) various crypto and upcoming Tokenized assets such as Stocks and ETFs while having custody of their private keys which provides maximum security and trust.

The DEX provides the users with all the features that are available on a decent centralized exchange while the users can safely manage and have custody of their own assets. The Sologenic DEX supports different wallets integrations such as SOLO Wallet, Ledger Devices, D’cent, XUMM, and more. Some of the features are:

SOLO for minting, listing, and featuring NFTs on the upcoming Sologenic NFT marketplace

Users will be able to mint and list their NFTs on the upcoming Sologenic NFT marketplace by burning SOLO Tokens. Featuring an NFT will also be possible by using SOLO as a payment by using a bidding system. 100% of the SOLO Tokens collected as fees will be burned instantly.

“The SOLO core team feel the excitement within the crypto community for the launch of the upcoming NFT marketplace on the Sologenic DEX and we believe that this new marketplace is going to solve the current barriers and problems such as extremely high cost of transaction and slow networks to mint, bid or trade NFTs.” – Reza Bashash – Tech Lead at Sologenic Development Foundation

Sologenic.com (Manticore Securities AS) is a Public Limited Company, registered in the EU with the aim of obtaining MiFID ll Investment Firm license to tokenize securities such as stocks and ETF on the XRP Ledger using the Sologenic Ecosystem. SOLO Tokens play an integral part in when the platform is fully operational. Currently, Manticore Securities AS is in the process of obtaining the license and has developed a test environment that simulates the tokenization of securities on the XRPL.