Pegasus drone designs come in many forms, shapes, and sizes. The developer of self-driving truck kits and Pegasus drones for the US Army, Robotic Research, and one manufacturer of hi-tech smart radios, Persistent Systems announced a new collaboration. These two firms said earlier this month that they are increasing their collaboration with a Long Term Agreement.

Based on this agreement, Robotic Research’s devices will fully integrate into the Persistent Systems smart radio ecosystem. It will enhance Robotic Research’s Pegasus drones that like Starscream from Transformers, can shift their shape between aircraft and ground modes.

The three Pegasus drone variants can roll smoothly and quietly on the ground using narrow side-mounted tracks with significantly high ground clearance. While on its ground mode, it uses its four rotors to do short hops over small obstacles like train tracks. This ability to hop over insurmountable makes this drone category’s movement better than many other unmanned ground vehicles (UGV).

But, when a Pegasus drone changes into sustained flight mode, its tracks flip upwards. This flip shifts the center of gravity to enhance its aerodynamic stability. The flight mode opens a 360-degree field of view for all its cameras while simultaneously shielding the rotors from collision damage. All of the three models in this Pegasus family can fit through a window or doorway hence can be used even indoors.

The small football-sized Pegasus Mini model can fit in a backpack and is designed mainly for reconnaissance and surveillance roles. It is perfect for tight places using a fixed electro-optical/ infrared camera.

Designed with twice the maximum payload at four pounds, the medium-sized Pegasus Iie has a total weight of 15 pounds including batteries. It can also carry CBRNE hazard sensors that detect radiations, chemicals, explosives, and many other substances. The Pegasus IIe drone also comes with skids that can be deployed down to serve as treads.

The third model is the 38-pound Pegasus III. This drone can carry 10 to 20-pound payloads, including a highly flexible gimbaled camera. Other equipment options that make up the drone include LIDAR sensors that create 3-dimensional terrain maps, systems that detect and dispose of explosives, and sometimes some electronic warfare jammers and sensors.

Every Pegasus drone has 30 minutes of flight endurance. However, it can drive for much longer on the same battery, ranging between 2 hours for the mini and 8 hours for the Pegasus III.

All drones are operated using a ruggedized video game-style PUCK controller. This controller uses ATAK software that is created by the Air Force Research Laboratory mounted on a commercial Android UI. Operators use these controllers to issue task commands to multiple drones without exerting direct control.

Cursory research published limited designs of UAS/UGV hybrids despite various academic studies of the concept. Beyond the cool design, many wonder what is the point of creating a hybrid air/ground drone. The Pentagon is yet to request this type of platform explicitly.

The co-founder and president of Robotic Research, Alberto Lacaze, and the director of business development at Persistent, explained their idea in a teleconference earlier this month. Lacaze said:

“[Pegasus] is challenging because it doesn’t fit the government’s traditional UAV or UGV development pathways. But we think it will change minds, and sooner or later we will have requirements for machines that have the hybrid capability.”

First, there is a logistical advantage of having one hybrid drone that can work on-air and ground-based unmanned systems. Additionally, hybrid UAS/UGVs may prove useful for accessing hard-to-reach places including building interiors.

Although they are not designed for long-distance operations, their range can be measured in miles as explained by Lacaze. Pegasus’s hybrid nature is also believed to give it an endurance edge since it does not need to fly the entire time.

For instance, a Pegasus drone can land on a roof and ‘perch and stare’ for days using its cameras to surveil the surroundings without consuming much battery. It can then hover through a window or enter through a door if the operator finds it necessary to scout inside a building nearby. The drone can then quietly search inside the rooms rolling on treads.

The system’s command link is a lifeline as well as the Achille’s heel of the system which is vulnerable to disruption by dense terrain, inclement weather, and hostile jamming. The terrain is seen to limit the remote-control range for ground vehicles.

These drones use inertial navigation systems (INS) that are powered by Robotic Research’s WarLoc “boot-box” system to track dismounted personnel even in GPS-denied areas. WarLoc uses a radio to create a distributed network with other WarLoc devices within range to track their relative positions precisely.

The manufacturer developed a huge radio link by setting up Embedded Modules developed by Persistent Systems within its Pegasus II and III drones. The modules are a miniaturized derivative of Persistent’s MPU5 smart radio the size of a pack of playing cards. This system powers the company’s Wave Relay mobile ad-hoc network (MANET).

“There are many radios that can do meshing, but few that don’t increase latency majorly when doing hops. If you have to do 2-3 hops of the radios, you wind up with a second or two of delay. That’s a non-starter when trying to tele-operate a vehicle. Having something with meshing and penetration, as wells as doing all of that with low-bandwidth and good latency is a must.”

Apart from enhancing WarLoc’s distributed navigation capabilities, the mesh network relays all signals. Thus, an operator can maintain a link to distant ground drones using nearby airborne drones as an intermediary. That is a possibly useful strategy for communicating effectively with a drone in a low wireless-penetration environment like a cave, culvert, or building.

This distributed radio network is also critical for implementing ‘swarming’ AI behavior where multiple drones cooperate to do complex projects based on a simple command. Lacaze highlighted:

“Through the ATAK software system, you assign an area and the drones automatically assume trajectories to perform a mission without having to set waypoints for each drone. Because if you have 10 vehicles, creating all those waypoints on time becomes impossible. And they’ll share and update their behavior based on what they find.”

In 2020, the US Army successfully tested Pegasus’s autonomous mapping capability.

“Now say we want to survey a Landing Zone. It may have a lot of terrain or buildings, so you might fly some birds to create a 3D map of the LZ to make sure there are no obstructions. Or you could have a large group coordinate to find the source of a chemical emission, or scan an indoor space.” 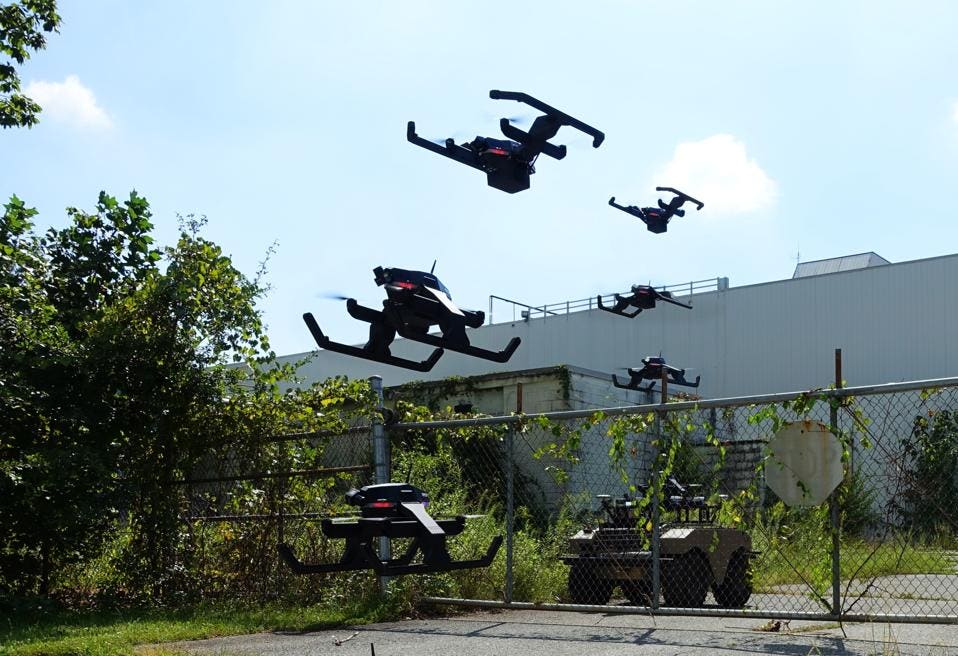 Robotic Research also said that it is developing a concept for Manned-Unmanned Teaming (MUM-T) via a kit using a communication/power cable. The cable will be used to tethera Pegasus drone to a vehicle for quick field deployment. Although using a tether for an air/ground platform appears tricky, Lacaze explained:

“Say you have convoy going somewhere. If it encounters [a possible threat], normally it stops and becomes very vulnerable. So having a bird that can take off from one of those vehicles and provide long-endurance oversight over the area is very important.”

Any network that gives commanders precise information and control over different unmanned systems can theoretically be disabled or exploited by hostile external forces. Nonetheless, Lacaze says that Pegasus remains highly secure since its links are developed for jamming resistance together with Low-Probability-of-Detect and Intercept; especially radio wave stealth.