In context: Iron Man VR launched last month and I was surprised to find critics panning the game. I had played the demo and thought it was quite fun. Interested in seeing how much could have changed between the release of the demo and the full game, I purchased it, played it, and here’s my report back.

Video game developer Camouflaj embarked on an ambitious journey when it began development on a VR title featuring Marvel’s iconic metal superhero Iron Man. Doing Tony Stark’s alter ego justice, or any comic-book superhero for that matter, is not easy when you are up against an established rabid fan base. As one of those fans, I was eager to see what the developer came up with, but held my expectations in check, especially after news of a few delays.

When I bought my PSVR, Camouflaj’s Iron Man demo was already available on the PlayStation Store, but I held off downloading it. I am new to VR and wanted to get my sea legs before diving into a game I knew would quickly trigger motion sickness. When I finally did install the trial, I was impressed by what was there. I knew virtual reality was the perfect platform for such a game, but I was still amazed at the immersion I felt when I first stepped into the suit. 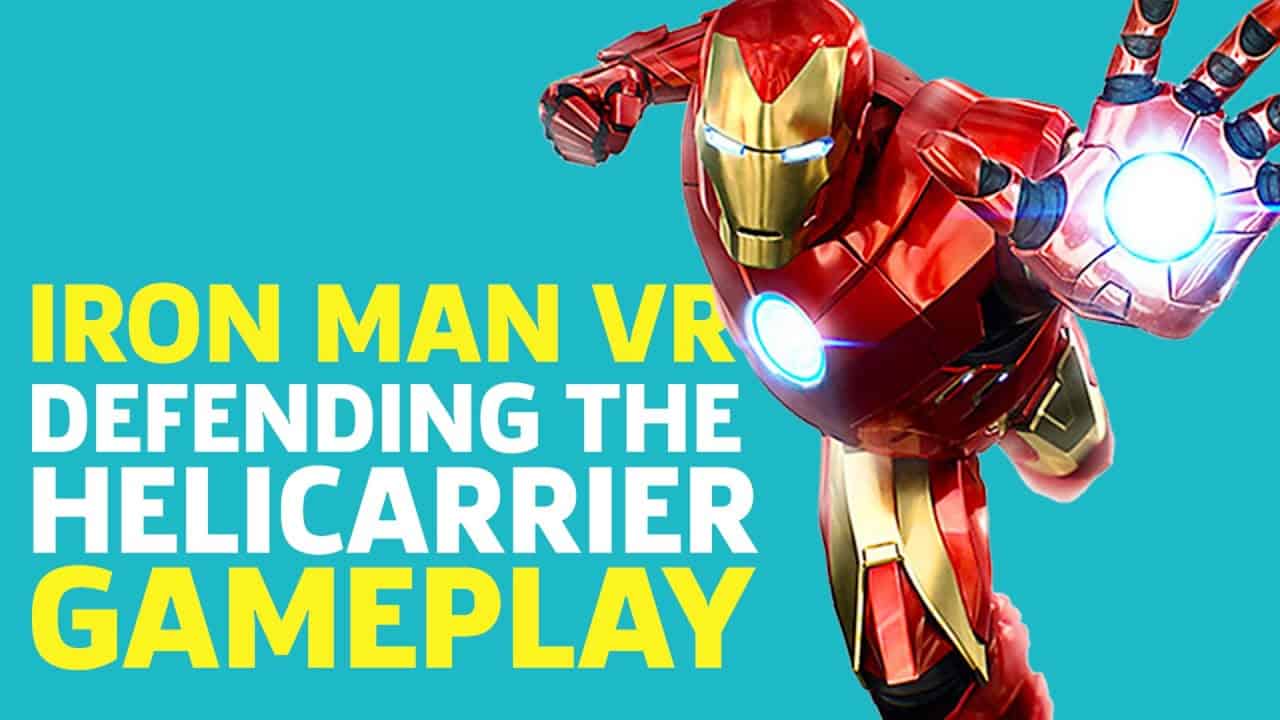 On finishing the demo’s content, I already knew I wanted more. So I was a bit surprised as launch day approached at the terrible early reviews the game was getting. I wondered how it could have changed so much from the demo to the full version that it would get such criticism. Camouflaj must have really screwed up, and I was about to find out how, since I had already paid for a pre-order. I don’t often pre-order games, and it felt I was about to be reminded why.

To my surprise, I was not displeased with my purchase. I felt that the developers had done an excellent job turning me into the heavy metal man. I’m such a geek that when I finished the game, I threw my hands in the air and shouted, “I am Iron Man” in my best Ozzy Osbourne impersonation. My wife was not impressed. I guess it’s not as effective if you don’t say it in front of a spinning fan.

One of the biggest complaints was the control scheme Camouflaj implemented. Many found the controls difficult to learn. Admittedly, learning to juggle between steering with your hand jets and blasting enemies with those same hands (repulsors) does take some practice. However, there is free flying, combat challenges, and time trials aside from the main game that will have you mastering the mechanics in little time. Perhaps we can chalk that one up to reviewer impatience. Time is money, and getting a review out fast often takes precedence over learning how to play the game. It’s understandable then that some would say the controls were too hard. There is a learning curve that is a bit steeper than most VR shooters.

Some reviewers claimed to have tracking issues while using the Move controllers. Engadget’s reviewer griped that he could not play on his couch. “It’s hard to fly with your arms shot out at your sides when you’re sat on the couch. You try it,” they critiqued.

Indeed, Iron Man VR is not something you want to play seated on a couch. However, is it fair to ding a VR title for that? Most VR games require much more freedom of movement than can be allowed on a sofa. The ones I have played are best suited to playing in the middle of the room on a stool.

Since most flying in Iron Man requires having your hands to your sides, something that easily accommodates that position is best. I used my office chair, and the PSVR had no issues tracking the controllers. In my opinion, this complaint was not an issue with the game so much as a personal preference problem. One of the most critical Iron Man VR reviews I read came from Ars Technica who advised to “avoid” the game. They also were frustrated with the controls and the reviewer didn’t like the variety of different attacks at his disposal or how they were executed.

Between all the flying mechanics, players must also master a set of attacks that can vary as you upgrade your suit. Repulsors are palm-based weapons that are fired with your palm facing forward. Top-of-the-hand artillery like rockets and miniguns are activated with your palm facing down. Rocket punches and ground pounds are triggered by holding a button to charge it, then making a punching motion. The distinction between the last two is dependant on where your visor is pointed. Looking at a flying enemy executes a rocket punch while aiming it at a surface-based enemy brings up the ground-pound reticle.

It sounds like a lot on paper, but boiled down to the basics, it’s only three different gestures. Furthermore, they are all very natural motions. I found the offensive mechanics quite intuitive. Once again, the optional combat and flying missions are great places to practice these maneuvers. So this critique also seems to stem from not taking or having the time to learn the mechanics.

Ars also did not like the loading times and accompanying screens. While Iron Man’s load times are long, I feel they were exaggerating by saying, “Every single time you switch from one interior location to the next, you can expect a loading screen as short as one minute and as long as two minutes.” I never experienced a two-minute load time. The most prolonged wait for me was maybe one minute, and that was for booting up the main missions, not room-to-room transitions. I’m not sure what consoles other reviewers used, but I played on a PS4 Pro.

Performance between the Pro and the standard PS4 could make the difference in load times. I did not notice drastic drops in frame rate while playing on the Pro either as some have reported. It does seem evident, however, that Camouflaj recognized the load times as a weakness because it went to the trouble of making the loading screens interactive. While waiting for the level to boot, you can click through hints, read the level briefing, scroll through screens showing you different armor sets, and what you need to unlock them. Once you get bored with that, there is a texture on the floor that you can doodle in with your virtual laser pointers.

All in all, level loading is not that painful. I suffered far more excruciating load times in many other games, which will remain nameless—GTA5—Fallout 4. Iron Man VR’s loading screens beat staring at screen art as your life ticks away. I imagine it’s even worse when you have a looming review deadline, so I suppose this critique is forgivable. The one gripe I did find somewhat valid was what Ars dubbed, “Iron Man VR wrist.” Like Wii elbow, this ailment will have your wrists barking at you to stop playing. The pain seems to be primarily caused by the one controller complaint everybody has that I find entirely justified.

During battles, you are frequently required to turn sharply. Sometimes you even need to spin 180 degrees. While this can be accomplished by turning your body or spinning in your stool, this causes issues with tracking with the added risk of tangling the PSVR cord and pulling the whole setup to the floor. So to facilitate turning, you use one button on each Move controller for right and left turns. If you push them both together, you flip around 180 degrees.

Pressing these buttons and angling your wrists for fine-tuned steering puts a strain on those muscles and gets painful in longer play sessions. I only experienced it after playing for well over the recommended time for a VR session, which is 30 minutes. Taking a 20- or 30-minute break when you start to feel strain is effective. Stopping for shorter rests between each level also helps. So Iron Man VR wrist is a nuisance, but it’s also avoidable.

My chief complaint about the game was that I felt the story was too short. Some reviews, like GamesRadar’s, said it was too long. GR’s reviewer was hoping for a game “spread over a few hours.” Not including the optional challenges, Iron Man runs closer to eight hours. But I’m a sucker for a good long narrative, so I was sad to see the story end even though it was probably the right length for a VR game. I guess that complaint was probably valid for most, just not for me.

I bought my PSVR only a few weeks ago and there are likely a lot of great games I have yet to experience. That said, Iron Man is one of the most enjoyable VR games I have played so far. Could it have been better? Sure, but in terms of placing the player in the main character’s metal boots, I think they nailed it.

Iron Man, by its very nature, is well suited (no pun intended) for the VR platform, and few critics would disagree with that. “Iron Man feels like a perfect fit for virtual reality,” said Kotaku. “When I put on my PSVR headset and started playing Iron Man VR, I felt like that famous, armor-wearing superhero.”

Indeed. From the HUD projected onto the visor to the suit’s AI whispering advice and status warnings into your ear to using your hand jets to steer as you fly, the game succeeds in making you feel like you are Iron Man. I would just say, if you haven’t tried the free demo, play it. If you like what is there, you can expect more of it in the full game. Don’t let the bad reviews stop you from experiencing a game you might like as much as I did.

Iron Man was a risk for Camouflaj, and in my opinion it’s paid off, but not everyone agrees. I think the studio did good work for the VR platform. Whether you like the game or not, this is the inventive and immersive game design that will keep VR alive as it matures.

A new generation of hardware is on the horizon, and VR developers are going to have a lot more horsepower at their disposal. It will be exciting to see how they put it to use in virtual reality.