For now, only a handful of stages are available in P-06.

According to Moris, only “very small snippets of pseudo-code” can be accessed or seen in Sonic 06‘s files. These digital tidbits include values, formulas and parameters for core character attributes, such as running speed and jumping height. They also provide some insight into the game’s levels, including objects and enemies. “But that is a very small fragment of what makes the game,” Moris said.

The closed-off nature of Sonic 06‘s programming isn’t unusual. Most games, Moris explained, have scripts and code that are inaccessible unless you’re the owner or creator of the game. Thankfully, some knowledgeable users online have managed to crack open Sonic 06 files that explain the three-dimensional placement and rotation of each object in the level. It’s often not obvious, though, what these values relate to and the additional code that’s required to make them work. “A lot of the time, whether an object works correctly or not, compared to the original game, depends on if I manage to code it to work exactly, or at least similarly to its original counterpart,” he explained.

With those small code snippets, as well as minimal models, textures, videos and sounds, Moris started to piece the original game back together. At first, he simply tried to recreate each level while hiding or removing the most obvious “broken stuff.”

“I have to go through every spring, jump ramp and launcher.”

The developer had a good sense of how the game looked and played just by watching and analyzing YouTube videos. He also created a folder that now has “gigabytes” of reference material, including beta footage and fan-recorded gameplay. “It wasn’t too hard to figure out how it controlled originally,” he said. A larger problem was making sure every piece of the environment behaved properly. “The way [the original] Sonic 06 controls objects is very unpredictable,” he explained. “I have to go through every spring, jump ramp and launcher and see if they even make the character land where they’re supposed to.”

There was also a ton of assets that Moris had to create himself, including textures, character animations, typefaces and “most of the shaders,” in the game. He used some asset packs from the Unity store and, where possible, tried to improve the ones that shipped with the original game. 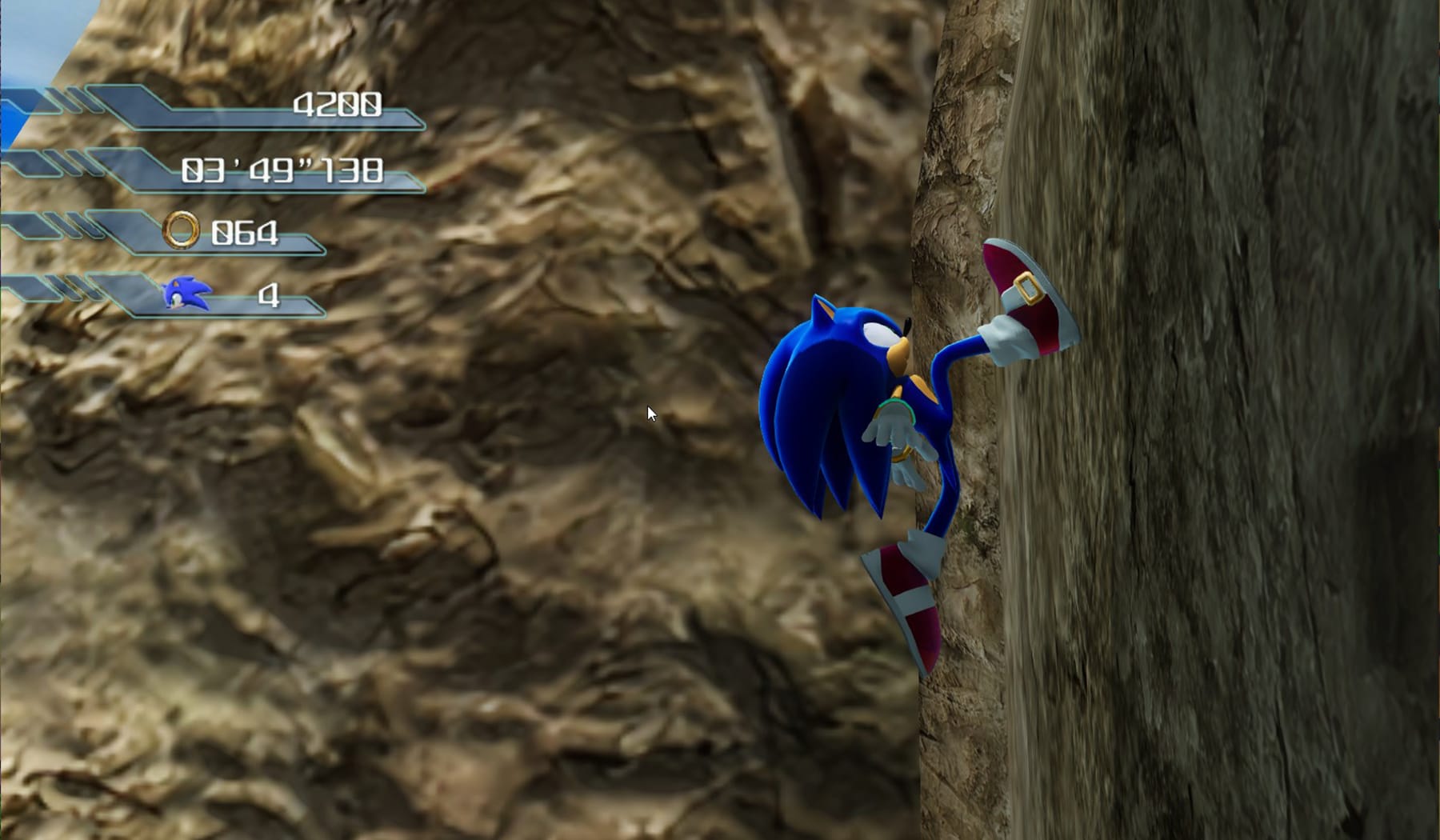 Such a large project required some collaborators. In the original game, for instance, Sonic is portrayed using six different character model files. These cover Sonic’s complete body, an alternate body with gem shoes, Super Sonic’s body and then three faces used in standard gameplay, cutscenes and while playing as Super Sonic. A Scottish modder called Gotta Play Fast used Autodesk 3ds Max, a professional application for 3D modeling and animation, to combine these pieces in a way that would be easier to use inside Unity. After “quite a few tries,” Gotta Play Fast told Engadget he ended up with five complete meshes for the game: Sonic and Super Sonic, as well as standard, gem and Super Sonic’s gem shoes.

Many of these users describe their contributions as “minor,” though. “Especially considering that the actual development and coding is currently only being made by one person, ChaosX,” Daguar said. “He’s really talented and hard-working and I’m sure he’s going to have a bright future in game development.” Moris added: “Everything has to go through me in the end, the only owner of the project files, putting everything together.”

Look at that water!

The first P-06 demo, which only contained the Wave Ocean and Kingdom Valley stages, was released last April. The announcement video has roughly 150,000 views on YouTube and, more importantly, a deluge of comments praising its visuals and bug fixes. “You are a god,” one user wrote. “This looks gorgeous,” another viewer named The Bone said. “This dude is literally fixing a game that was supposed to be the best Sonic game ever, all while adding extras to the game to make it better,” a user called Batbudd commented. “Bravo.”

Version 1.5 was released the following month with bug fixes, gameplay tweaks and small quality of life updates, such as improved widescreen support and a farther back camera position. Moris then released a second demo — the one with five stages — in October. A user called Raze commented on the announcement video: “You’re a god. Thank you so much for remastering this game, it looks so good!” Another, called Saikuran, said: “Bless you, for real. I have a huge soft spot for ’06, and I’m loving all the effort you’re putting in to make it the game it could have been if it wasn’t for the multitude of development issues.”

“It’s been two years working full-time on this project. It’s about time for [me to have] some vacation.”

The demo was followed up with a “v2.5” bug fix update last month. In that video, Moris revealed that he would be taking a short break from P-06 so he can focus on other passions and get some fresh air. “It’s been two years working full-time on this project, and it’s about time for some vacation,” the developer said.

The P-06 demos are further evidence that Sonic isn’t finished as a pop culture icon. The blue blur can’t compete with Mario in the 3D-platformer genre, but he’s found some success in smaller projects like the wonderful Sonic Mania and the enjoyable if hardly ambitious Mario & Sonic at the Olympic Games Tokyo 2020. A computer-animated version of the hedgehog is also starring in a movie next year alongside James Marsden (X-Men) and Jim Carrey (The Mask). Fans hated his appearance in the first teaser — the human teeth and strangely muscular legs were a bit much — and pressured Paramount Pictures to change it. His redesign, shown off in a “new official trailer” last month, was a massive improvement.

Unsurprisingly, Moris doesn’t know when P-06 will be finished. Some demos take longer than others to complete, and he can’t predict when he’ll be “happy” with the game or how long it’ll take to eradicate every conceivable bug. “I have no idea when it will be finished,” he admitted. “A wild guess would probably be in two years, but I’m very unsure about that.”

Moris has modest expectations for the project, too. He knows that many parts of Sonic 06 — including its reputation and impact on the larger franchise — can’t be changed or fixed. The developer also expects P-06 to remain an “underground” project for Sonic fans and those who can appreciate what Sega was trying to achieve with the original release. “Hopefully one day this game can be liked as much as any other Sonic game,” Moris said. At the very least, P-06 will broaden access to a game that — while generally disliked — is an important part of Sonic’s history and necessary to understanding his place in the industry today.