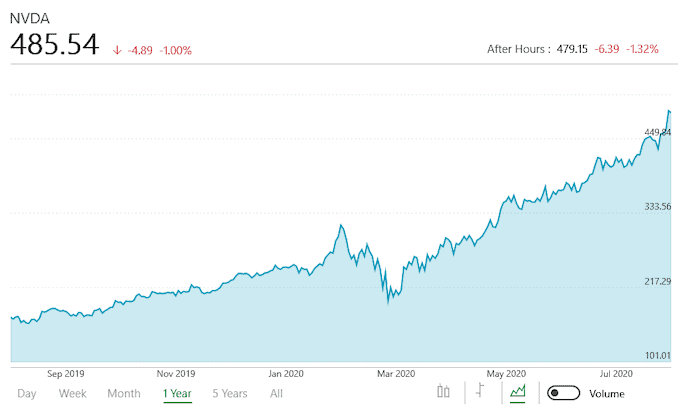 This afternoon NVIDIA announced their results for the second quarter of their 2021 fiscal year, closing out on an exceptional quarter for the company that set numerous revenue records. With over $3.8 billion in revenue, Q2’FY21 was not only NVIDIA’s biggest quarter yet, however for the first time NVIDIA’s datacenter revenue has surpassed their gaming revenue, the traditional cornerstone of the company. Thanks to the Mellanox acquisition as well as ongoing A100 accelerator sales, the datacenter market has, at long last, become NVIDIA’s single largest revenue segment.

For Q2’FY21, NVIDIA booked $3.87B in revenue. Compared to the year-ago quarter, this is a jump in revenue of 50%, making it not only NVIDIA’s best Q2 yet, but their biggest quarter overall. And while NVIDIA’s relative profitability took a hit due to GAAP accounting rules, the company still booked $622M in net income for the quarter, 13% more than in Q1’FY20.

Impacting NVIDIA’s results both positively and negatively was the Mellanox acquisition, which closed at the start of Q2. Mellanox added another 14% to NVIDIA’s revenue – all in the datacenter segment – helping to fuel NVIDIA’s new highs. At the same, however, closing the acquisition came with additional one-time charges for NVIDIA, cutting into NVIDIA’s profit margins. As a result, NVIDIA’s gross margin for the quarter was 58.8%, down 1 percentage point from last year, and several percentage points from last quarter.

Among several firsts, Q2 is also the first full quarter for A100 revenue for NVIDIA. Even a quarter later, A100 production is still ramping – and is nowhere near the majority of NVIDIA’s datacenter GPU sales – but the high performance (and highly profitable) accelerator is helping to further grow NVIDIA’s already sizable datacenter GPU revenues.

Overall, datacenter revenue overtaking gaming revenue has been a long time coming for NVIDIA, and an important step in the company’s long-term goal of diversifying beyond graphics. While it’s arguably taken longer than CEO Jensen Huang would perhaps have liked to see, there’s no longer a question of whether NVIDIA has “made it” as a compute company rather than a gaming graphics company – and this is a big factor in NVIDIA’s market cap recently surpassing Intel’s.

Meanwhile NVIDIA’s gaming revenue, even after being bumped from the lead spot in terms of revenue, closed out on another record quarter with $1.65B in revenue. This was up almost 25% on both a yearly and quarterly basis, with NVIDIA finding itself the unusual beneficiary of the current coronavirus pandemic. With people largely staying isolated and staying home, video gaming is on the rise, and according to NVIDIA this has also boosted gaming GPU and SoC sales.

Going forward, it will be interesting to see if gaming revenue remains solidly in second-place for NVIDIA, or if it and datacenter revenue end up jockeying for position. Both segments are expected to grow, especially as NVIDIA prepares for the impending launch of their next generation of GeForce video cards. A strong showing late in the year could give gaming revenue one more – and possibly its last – hurrah as NVIDIA’s largest segment.

Meanwhile NVIDIA’s professional visualization segment once again brought up third place for the company. That segment saw just $203M in revenue, which is down significantly both on a quarterly and yearly basis. After enjoying a mild bump in Q1 due to the coronavirus pandemic, office closures and other changes have begun suppressing ongoing demand, with both laptop and desktop sales declining. For the same reason, this has driven higher sales of virtualization/cloud products for remote working, but not by enough to offset PC losses.

NVIDIA’s automotive business was also a victim of COVID, with the segment pulling in just $111M in revenue for the quarter. This was down on both a quarterly and yearly basis, with the latter representing a 47% drop in revenues. According to comments made on NVIDIA’s earnings call, automotive production bottomed out in April due to COVID, hurting revenue for the segment.

ended up being something of a laggard for Q1’FY21. The segment booked $155M in revenue, which is down 7% from the year-ago quarter. NVIDIA’s automotive business moves at a much different pace than its GPU businesses – in part because it’s not set to really take off until self-driving cars become a retail reality – so the business tends to ebb and flow.

Finally, NVIDIA booked $146M in OEM & IP revenue for Q2. Among other things, this is the segment where NVIDIA books its entry-level laptop GPU sales, and it’s those products that helped to drive higher revenues here.

Wrapping things up, looking ahead to Q3 of FY2021, NVIDIA’s current predictions call for another record quarter. The company is expecting around $4.4B in revenue, and gross margins are anticipated to recover to above 62% as well. On the product side of matters, Q3 should see additional ramping of NVIDIA’s A100 accelerators, and almost certainly will see the launch of new Ampere-based GeForce video cards from the company as well.

'Black Ops: Cold War' is the next Call of Duty game.