SINGAPORE, NFT Terminal, a leading provider of services for the growing NFT market, announced the beta launch of a service with its namesake, NFT terminal, a real-time analytics platform for NFT sales, mints, and transaction trends. 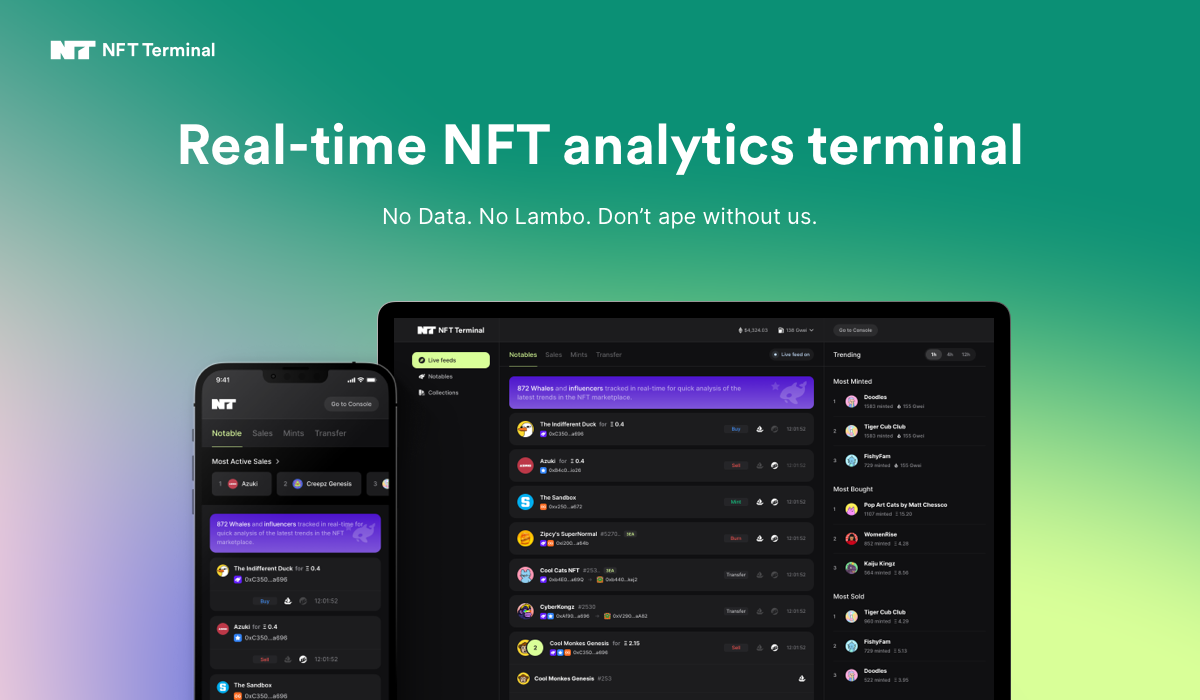 NFT Terminal opened its beta release nearly a month after the successful launch of their first service: Console. In under a month, Console has provided over 730,000 users and 100 NFT communities the ability to search rarity metrics, see real-time OpenSea data, track mint events, and look up Ethereum (ETH) gas prices (gwei) in real-time.

“We started Console because we noticed that DAOs (decentralized autonomous organizations) and other communities lacked access to relevant data regarding their NFTs, “according to the NFT Terminal team. Through extensive research, the team noticed that one of the frustrations of DAO members who traded or minted NFTs was that there were no reliable tools for real-time analytics, sparking the development of Console. What’s more, the team noted that DAOs and other NFT projects had to compile different tools across various platforms to provide relevant data surrounding their NFTs, which in turn, slowed their ability to build value within their communities.

With over 730,000 users acquired in its first month, the NFT Terminal team decided to build out new services to better serve their users. The team explained the following, “what we noticed was that more and more individuals in the communities we serve wanted a better way to track all NFT transactions in real-time instead of tracking partial data; so we listened and built it.”

The team developed Terminal to better serve potential buyers who need to quickly spot trending collections or mints, eager sellers who want to gauge transaction trends before auctioning their NFTs, and expert collectors who simply wish to monitor the movement of whales.

Using the knowledge that they acquired from planning and executing Console, the team developed a terminal with feeds that update in real-time. NFT Terminal, the service, provides the following features:

NFT Terminal is available now on both mobile and desktop, and the beta release is free to use.

The team at NFT Terminal hopes to use the beta release as a springboard for more features like analytics for NFT collections and rarity indices. They expect to roll out new features quickly and hope to one day have all the important NFT analytics in one place like Bloomberg does with its terminal.

Dogecoin (DOGE) $ 0.066612
We use cookies to personalise content and ads, to provide social media features and to analyse our traffic. We also share information about your use of our site with our social media, advertising and analytics partners who may combine it with other information that you’ve provided to them or that they’ve collected from your use of their services.
Accept
Read more
Change Settings
Cookie Box Settings
Cookie Box Settings