With the latest studies presenting a pretty damning picture of screen time’s effects on children’s development, I’m delighted to hear that screen-free coding is all the rage now. It is exactly what it sounds like: a way to explore the key concepts of coding sans screen. At its core, coding is simply giving a set of specific directions to someone or something to produce a desired result. Nothing in that definition demands a screen.

It is about computational thinking though and the ability to identify and solve problems by breaking the problem and solution into workable chunks. You could teach your kid computational-thinking strategies by asking them to tell you how to make a peanut butter sandwich and it meets the screen-free requirement.

While my kids may want to consume peanut butter sandwiches while they code, hearing that they’re “coding” by telling me how to make them wouldn’t go over well. They want to turn ScratchJr purple and make him curse and jump. They want some form of pixels and plastic to beep and whir and zing. They do not want to watch their mother botch sandwich making because of their bad directions.

Enter mTiny, Makeblock’s cube-shaped robot for the preschool set. It’s cute. It’s fun. It talks. It twirls and giggles and sings. It’s screen-free but uses the same graphics found in ScratchJr in the form of coded cards.

In addition to the USB-rechargeable mTiny robot — with cute panda ears and tail — the kit comes with 36 coding-instruction cards, which are essentially cardboard versions of the ScratchJr graphics. To build codable scenes for mTiny to navigate, Makeblock includes 24 themed, reversible map blocks that kids put together like jigsaw pieces. 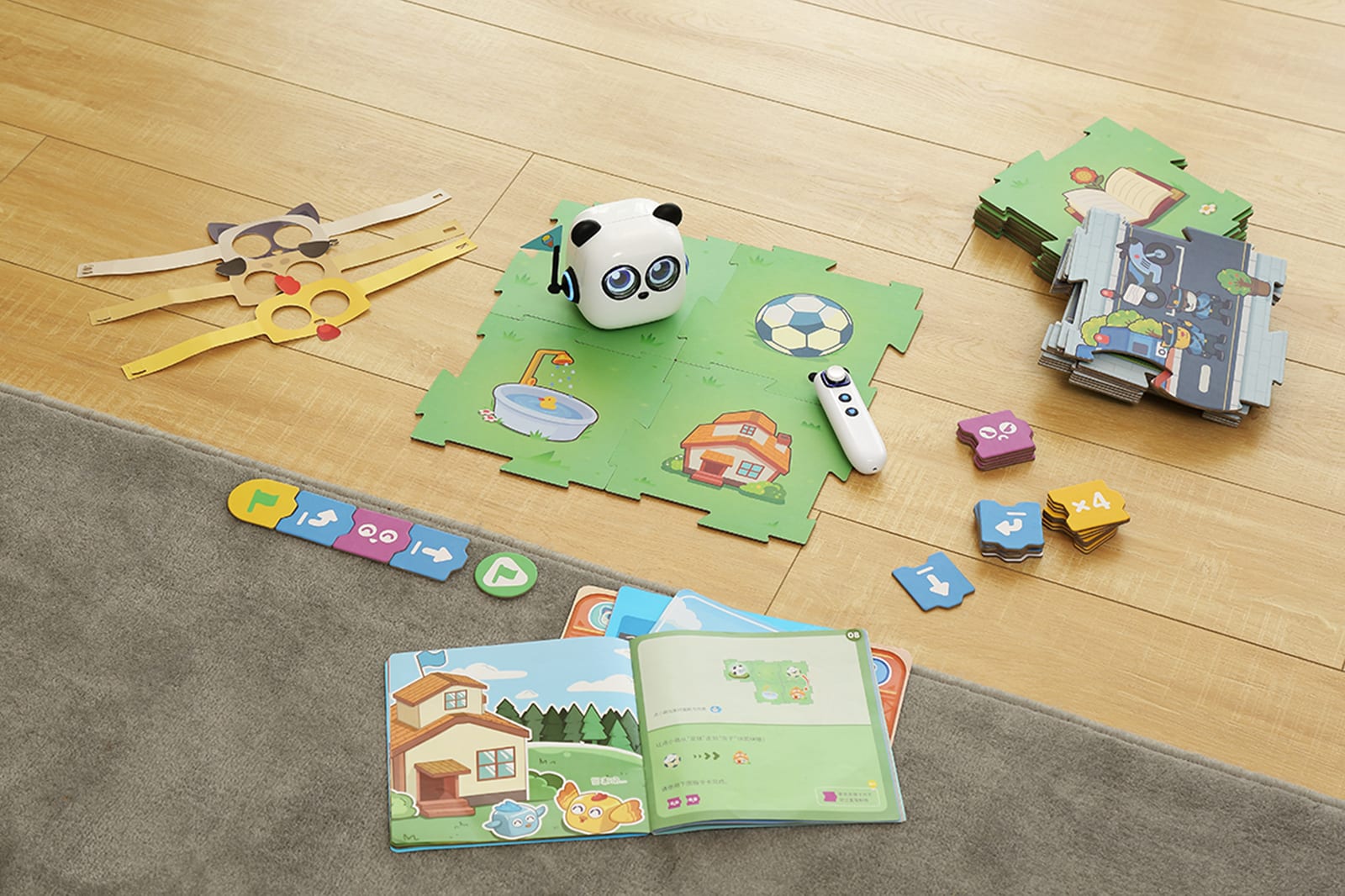 In the box, you’ll also find Makeblock’s rechargeable tap-pen controller, which allows kids to tap out the code using the coding cards. Then there’s the Storybook, tap-pen game cards and decoration accessories, including three animal masks for mTiny. Of the puppy, kitty or chick, my kids favor the chick: On the chick tile, mTiny clucks. My kids think it’s hilarious.

The Storybook activities are a great entry to mTiny. They start with a simple programming challenge: Code mTiny to move in a straight line across one tile, then two, then several, each of which makes the robot respond in different ways when she (we’ve gendered our robot) lands on them. Now, even though they use the map — the more challenging reverse side of the tiles — they still return to those beginning lessons when they need to work through a more complicated problem. In fact, my daughter, who’s five, still works through the Storybook first before she free builds with the map side of the tiles, “just to warm up,” she says.

The tiles and cards basically have hidden messages on them. Each is printed with CMYK (cyan magenta yellow black), which is pretty standard. But the black ink here is embedded with carbon and reserved for printing patterns of dots that can be read by mTiny and the pen. Basically the sensor in the pen converts these hidden dots into instructions and sends them to the robot. And a sensor under mTiny uses those dots to tell it about the tile it sits on.

0Shares
Codingeducationeducationaleducational toysgadgetrygadgetsgearmakeblockmtinyReviewrobotrobotsscreen-freescreen-free codingstem
Previous PostMicrosoft will start killing off Cortana for mobile in JanuaryNext PostBill V Bowie: How (not) to sell a tech idea