Singapore- What do you get when you combine Super Mario Brothers, Elon Musk’s puppy Floki, and cryptocurrency?  You get Mario Floki silly!  Remember the excitement while playing through the 8-bit side scroller as you collected coins, gobbled power-ups, and pounced on enemies to rack up the points?  I can hear the victory music playing as I slide down the pole at the end of each stage. Guess what, you can still get that nostalgia from the original game but here’s the twist – you can earn crypto just by playing it!  Read on to learn how –  Let’s-a GO!!!

What Is Mario Floki Exactly?

The crypto and blockchain space is growing rapidly these days especially in the past year.  Bitcoin just hit an all-time high and is continuing to push upwards while NFTs just hit the mainstream market.  Metaverses are hot and it seems like every day new cryptocurrencies are being created.  Amongst the noise, are tons of token projects and meme coins that took the spotlight. 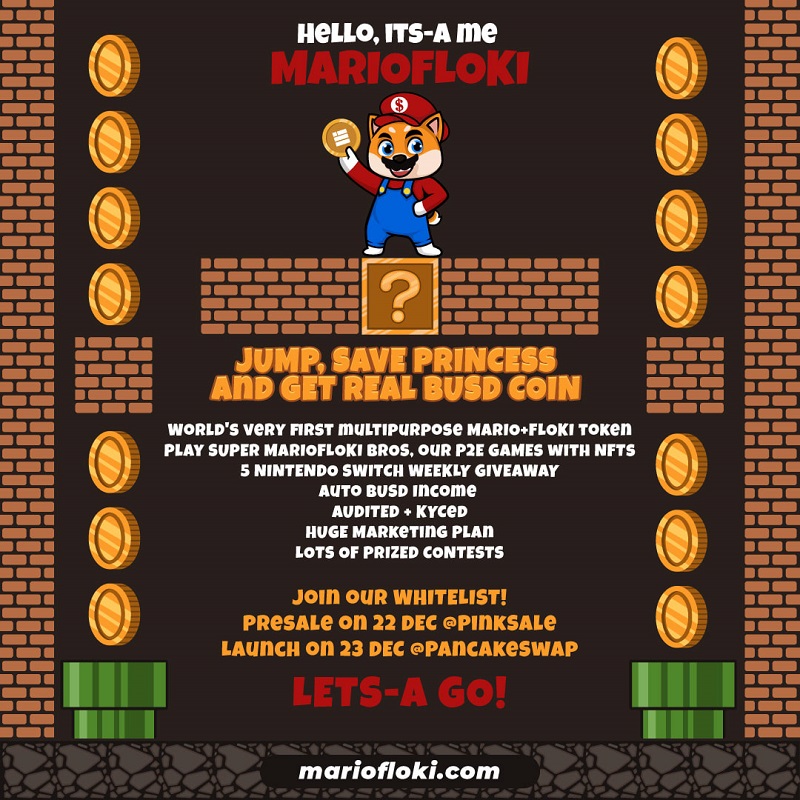 Imagine earning token rewards just by playing a Super Mario-themed mini-game, then using them to earn BUSD.  There’s also an NFT marketplace where you can buy, sell, trade, or HODL your favorite characters.  Aside from all of this, players and holders can use the tokens to actively or passively earn BUSD through their DeFi protocol.  This is all pretty impressive but it doesn’t end there.  As a member of the Mario Floki community, you are actually contributing to the welfare of kids (more on this later)!

The Pillars Of The Mario Floki World

We’ve all seen projects fail after the initial hype dies down and most of the whales have liquidated their holdings.  The overall trading volume reduces shortly thereafter, usually in parallel with the mounting FUD.  The fate of a token without utility, or at least a solid use case, is often destined to the graveyard of dead crypto projects.  Luckily for the Mario Floki community, several pillars establish the foundation of their token project.  Let’s take a look at each pillar in detail.

NFT games like Axie Infinity have taken the crypto gaming industry by storm this year and the blockchain gaming movement isn’t stopping any time soon.  Mario Floki capitalized on this movement by creating their play-to-earn (P2E) game which is reminiscent of the original Super Mario Brothers (SMB) side scroller.   Who doesn’t want to play games while earning, right?

The characters that can be chosen are all inspired by the cast found in SMB and the storyline is similar to it too.  You’ll be able to select a character like MarioFloki, or FlokeyKong, or a host of other familiar characters and progress through the levels while racking up points, collecting power-ups, and gaining experience.   Princess PeachFloki is being held captive so it’s your job to clear the stages of the MushroomFloki Kingdom and fight your way towards the final boss, BowserFloki.

All of this sounds pretty familiar, doesn’t it?  Here’s the thing – Mario Floki isn’t trying to reinvent the wheel or tap into the metaverse.  Their intention is simple:  Let players have some fun with mini-games and let them earn $MRFLOKI tokens at the end of each level completion.  The P2E mini-game format is perfect for those who like to game but don’t want to invest hours upon hours to level up their characters only to receive marginal payouts.  Playing the game is simple too.

You’re allocated three tries, or “lives”, per day which is similar to how the original SMB game was set up.  There isn’t a reset or pause button so there is an element of FOMO on token earnings per day if you were to lose all of your tries.  You’ll definitely want to hone your skills because the difficulty increases with every stage but the overall game is simple enough that the barrier to entry is quite low.  Because the P2E game maintains interest via the leadership rankings, players are incentivized to keep on playing and to continue unlocking rewards.   The players at the top of the rankings will receive prizes that are set by the community but you’ll need to be actively playing and maintaining your position to see what they will be.

Okay, so you’re getting good at the P2E game and are accumulating tons of $MRFLOKI tokens.  What do you do with them?  After accruing at least 100 million $MRFLOKI tokens you can earn crypto passively.   Yep, you read correctly!  The Mario Floki team calls this the “Super BUSD Bonus” where players can earn BUSD rewards automatically every hour just as long as this minimum holding quantity is held.  Since BUSD’s price is relatively stable, you can rest assured that your cashouts from crypto to fiat will be fairly accurate and predictable.

Other competitor tokens require a much higher minimum holding quantity – some as high as 10x more.  The $MRFLOKI token supply is limited to only 1,000,000,000,000 which is also comparably low to other competing projects.   What this means is that the relative token scarcity and the low minimum holding quantity for earnings make it attractive for passive income investors.  With the law of supply and demand in full effect here, you can expect the price of each token to increase in value as time passes, especially as interest in the project grows.

As a $MRFLOKI token holder, you will be earning on every transaction.  The tokenomics is set up so that for each type of transaction (either buy or sell), tax is collected and redistributed to different sections of the operations and as rewards to HODLers.  You stand to earn anywhere from 6-8% BUSD for these transactions so it pays to HODL – the more you hold, the more you will earn in taxes.  What’s interesting here is that from the taxes collected from the sell transactions, a portion goes to charity.

Mario Floki wants to give back, not only to the community of investors but also to those in need.   Mario Marathon is an online fundraising organization for children in need and the team at Mario Floki drew inspiration from them and mirrored their idea.  The team is working to establish partnerships with charities that specifically work towards the betterment of children’s lives.  Think of the children out there with no food, shelter, medicine, have disabilities, or lack opportunities.  What this means is, you as a $MRFLOKI token holder will be contributing to these charities and therefore helping to transform people’s lives.

The Mario Floki team is working to partner up with various exchanges soon so make sure to keep up with them via their Telegram account.  Once they are listed, you can expect their token value to spike pretty much immediately, so watch out for that.  The team plans to issue daily quizzes so that all levels of investors in the community and even non-investors have fair earning opportunities. These provide another avenue of earning rewards and while securing whitelist spots for giveaways.

Remember we talked about the playable characters in the P2E game?  Special edition characters can be purchased through the NFT marketplace.   These aren’t your typical NFT digital art, however.   You can marvel at its beauty but because only a limited supply of each character are minted, they will truly be scarce and as the project increases in popularity, they will become coveted items.

As an added incentive, these NFT’s can be playable in the P2E game.  The difference with these NFTs versus the stock characters is that they will have special attributes, like the ability to throw barrels if you have one of the special edition Flokey Kong NFTs.  Because the NFT can be used within the P2E game, you have an advantage in the game and this can ultimately play in your favor when earning rewards.

Why Should I Join Mario Floki?

Mario Floki is DeFi token project that allows players, investors, HODLers to earn crypto while buying and trading within their NFT marketplace.  The $MRFLOKI token is directly correlated to your BUSD earning potential.  The more you have the more you can earn passively but it isn’t just a means to earn crypto.

Mario Floki combines Defi and crypto P2E gaming while contributing to the betterment of children’s lives – all through a fun, playful, and familiar cast of characters.   If this isn’t a win for all, I don’t know what is.  The presale is coming up very soon so make sure to get in on the action as soon as possible.

To learn more about the project :

Visit their socials to get the latest updates on their progress: