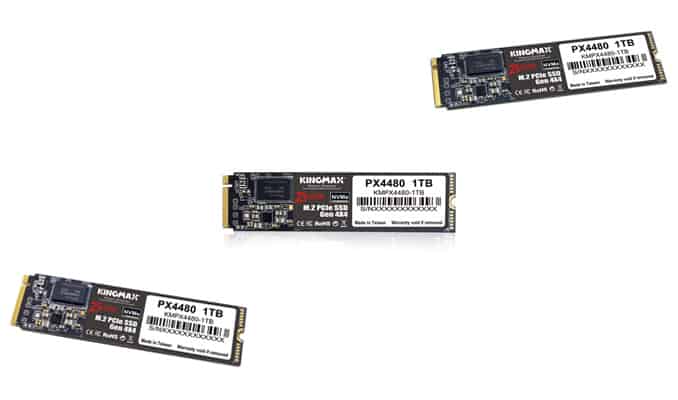 As AMD’s latest Ryzen 3000/X570 platforms with PCIe 4.0 support become more widespread on the market, SSD vendors are continuing to ramp up the releaes of their matching PCIe 4.0-based SSDs. Joining the party, KINGMAX, a known maker of components for enthusiasts, has revealed its first PCIe 4.0 SSD family, the PX4480.

The KINGMAX Zeus PX4480 SSDs are based on the Phison PS5016-E16 controller paired with 3D TLC NAND memory, and are available in 500 GB, 1 TB, and 2 TB configurations. A surprising thing about these drives is the fact that unlike most Phison PS5016-E16-based SSDs, KINGMAX’s PX4480 devices are not equipped with a heat sink, but come with a sticker made of a plastic-like material, which improves their phsyical compatibility, but might affect their performance under high loads.

Speaking of performance, KINGMAX says that the PX4480 drives are rated for up to 5000 MB/s sequential read speeds, up to 4400 MB/s sequential write speeds (when pSLC caching is enabled), and up to 600K/500K random read/write speeds, which is in-line with competing devices that use the same controller.

As far as endurance is concerned, KINGMAX rates its ‘4×4’ SSDs for up to 3600 terabytes to be written (TBW) depending on the exact model. Meanwhile, the drives are backed by a three-year warranty.

Considering that the PX4480 SSDs are powered by a widespread controller and the fact that KINGMAX already lists its PX4480 drives on its website, expect them on the market shortly. Prices should be comparable to similar products from competing suppliers.