One part of the industry that requires millimeter precision is building systems for small form factor designs – being able to take advantage of every small bit of volume inside a chassis but also maximize performance yet minimize noise is a critical element to the success of these systems. ID-Cooling has thrown another hat into the ring when it comes to cooling the processor, something that can be a tough job in such an enclosed space. The new IS-47K is designed with a maximum height of 47mm, and is apparently rated for CPUs up to 130 W.

Featuring six copper heatpipes and a 92mm PWM fan measuring 15mm thick, the IS-47K situates the fan in between the copper contact plate of the cooler and the heatsink, pushing air up through the aluminium fins, from CPU to outside. The whole element is nickel plated, along with a ‘metal frosted’ frame to keep the dimensions nice and snug. Judging by the renders, this cooler is designed to sit just on top of the rear IO, with a stepped type of cooling to facilitate rear connectors that come back a fair way into the socket area.

It should be noted that while this CPU is rated to support a TDP of 130 W, some processors during turbo modes will surpass that 130 W limit. Users will have to adjust their BIOSes accordingly. 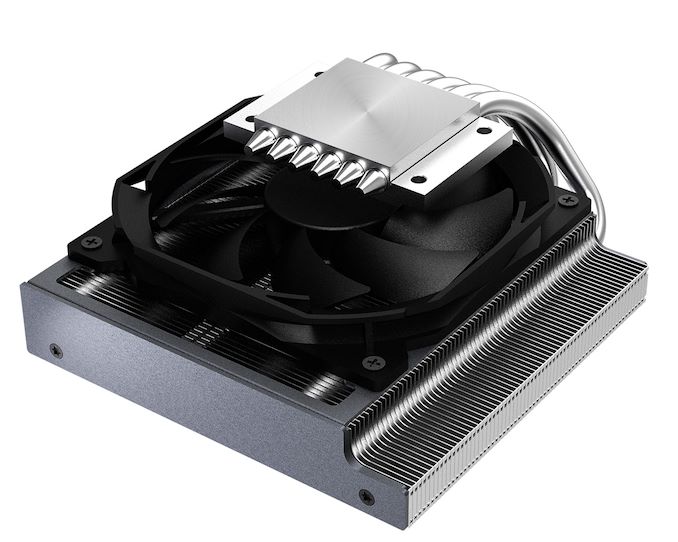 The IS-47K offers brackets for all Intel LGA115x/1200 sockets, as well as AMD AM4. It comes bundled with ID-Cooling’s own TG25 thermal grease, rated at 10.5 W/mK. ID-Cooling claims full memory compatibility with all mini-ITX motherboards, as it doesn’t go over the top of any memory modules. This means that the double-height G.Skill modules, enabling double-density on certain motherboards, should be suitable.