Singapore, We all know the power of meme coins, with 2021 being the year for these joke cryptos that minted millionaires overnight. Though Dogecoin, the ‘Godfather’ of all meme coins, was popular amongst crypto enthusiasts in the trenches of subreddits since 2013, it wasn’t until the first quarter of 2021 that Dogecoin mooned. With the lovable Shiba Inu-themed mascot being the face of the movement, countless copycats have popped up since and it doesn’t seem like enthusiasm for these meme coins is slowing down. 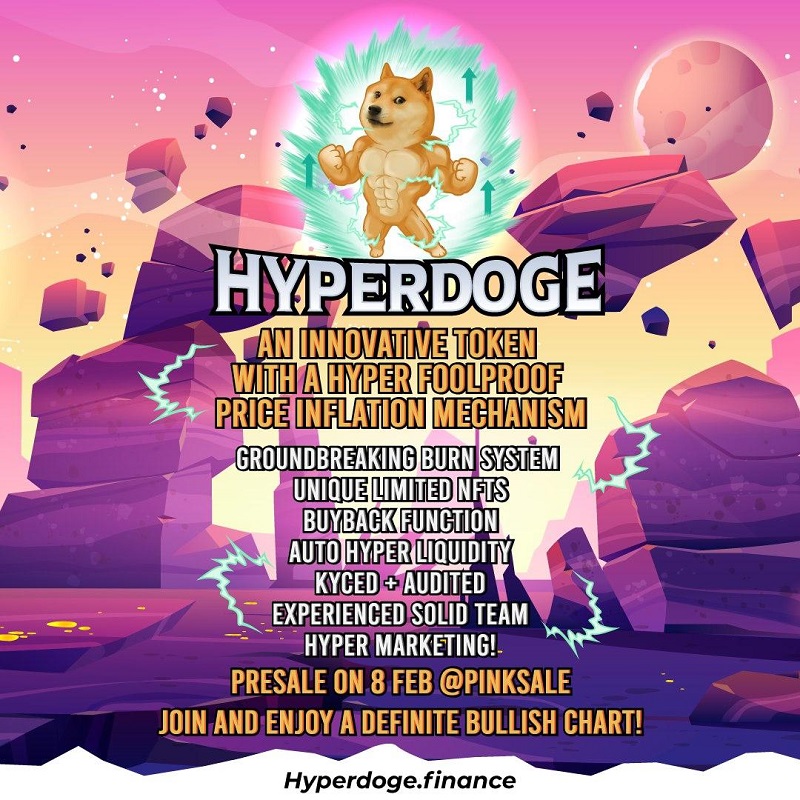 Most of the meme tokens typically follow Dogecoin’s price trajectory.  Shortly after mooning the price falls down and investor confidence wanes along with the overall price trend.  Look at Dogecoin now and you will clearly see a downtrend and there’s no indication that the price will recover to its glory day prices.  There’s a reason for this though.  These meme coins are literal joke cryptocurrencies.  They have no utility and no use case – not to mention their supply is typically uncapped.

All Dogecoin has is plenty of hopium but nothing to back up its perceived value.  What if there was a coin like Dogecoin but it has utility?   What if it had actual use cases beyond just being a joke cryptocurrency?  Guess what – HyperDoge is the new Shiba Inu-themed crypto but with actual utility.  Forget the moon, this crypto is headed to Mars!

What Exactly Is HyperDoge Anyway?

HyperDoge is not just any cryptocurrency and it’s not just another Shiba Inu-themed coin.  Sure the cute furry dog captures the hearts of those who want to yolo into a fresh new project.  It’s understandable that people may want to invest, wait for the pump, and liquidate to cash out on their earnings – this is all too familiar in the meme coin space.  However, what sets HyperDoge apart is that their token is capped at 1,000,000,000,000,000 $HYPERD tokens.  One quadrillion sounds like a lot but it really isn’t because their key selling point is that their token supply is hyper-deflationary.

What is so hyper-deflationary about $HYPERD?  Well, let’s take a look at Dogecoin to understand the concept of an inflationary token supply model.  Their supply increases over time at predefined rates of issuance.  This means that as their token supply grows, scarcity decreases which ultimately leads to a devaluation of the cryptocurrency.   HyperDoge, on the other hand, has identified this as an issue to holders and saw that this model won’t work for increasing any value.  So what did they do?  They completely went one-eighty on this model and made it so that after a series of scheduled burns, the supply will eventually go to zero.  Crazy right?

The law of supply and demand comes into full effect here.  It’s simple really:  the more scarce something becomes, the higher its perceived value gets.  This deflationary model isn’t new, with the likes of Bitcoin having a fixed supply and a series of halving events where it becomes harder to mine for rewards exponentially every four years.  Bitcoin has a 21 million BTC fixed supply so as the mining rewards become more difficult, the creation of new tokens is steadily being created as the decades go by.  This is all fine but who has the time to wait for this?  Fixed supply is so last year!

HyperDoge Has A Rewards Ecosystem, The Others Don’t

HyperDoge brings hyper deflation to the masses and accelerates the scarcity effect by periodically removing some of the supply through scheduled burns.  Their HypeBurn Mechanism is what sets them apart from the rest.  Remember the one quadrillion $HYPERD token supply we spoke of earlier?  At launch, these tokens will be distributed to various parts of the organization such as the liquidity pool, presale, platform fees, development team, advertising, and burn allocation.  These tokens are distributed in varying percentages amongst these allocations for good reason.

The liquidity pool is the market that creates the token’s price floor and houses the funding from investors.  Think of this as HyperDoge’s very own trading and investing market.  Because tokens will be allocated here at launch, there will already be liquidity in their market which basically means buying, selling, and trading can happen right from the get-go.  This is important because, without liquidity in any market, trading isn’t possible.

Another important part of the ecosystem is the burn allocation bucket.  Here, exactly half of the total supply of $HYPERD tokens will be allocated and locked in place.  This means that when the HyperBurn Mechanism kicks into gear, the scheduled token burns will be extracted from this pool.  At first, 2 million tokens will be burned but then the magic happens.  For every subsequent burn after that, double the tokens of the previous schedule will burn.

For example, on the first burn, there will be 2 million tokens burned.  On the second burn 4 million will be burned, then on the third 8 million, and so on.  Just to give you a heads up, on the tenth burn, there will be over 1 billion tokens burned!  Insane!   HyperDoge lists these burn schedules on their website and whitepaper so make sure to check there for the full schedule.

The rest of the token allocation will be distributed to the presale, platform fees, development team, and advertising.  The presale allocation serves as an incentive for those investors who get in on the project early and show support.  Because they show their love at an early stage HyperDoge is returning the love by allowing them to purchase tokens at its lowest prices.  At the same time, this incentivizes trading which helps to jump-start the liquidity pool.  As with any project, funding and re-investing into the business is key for growth.   This is why the balance of the token supply will be allocated for platform fees, the development team, and advertising.

Meme coins like Dogecoin aren’t set up so that HODLers can earn passive income.  The only way to earn is to actively trade:  buy low, sell high.  With their price trending downwards, it’s more than likely that their HODLers are not turning a profit.  Sure, you can scalp trades but who has the time and energy to enter in and out of the markets?  HyperDoge profits can be made via the trading route just as any other cryptocurrency but their tokenomics ensures every HODLer, no matter how large or small their bag, will earn passively.

Whether you’re simply holding your $HYPERD tokens or buying in and out of the liquidity pool, you will earn passive income through token reflections.  This works due to the reflections earned from every buy and sell transaction.  For example, let’s say you have a few tokens in your wallet.  When someone makes a buy transaction a tax is collected and a portion of that tax is automatically distributed to you.  So you literally don’t have to do anything to be earning these reflections – only HODL!

All transactions have a tax but the tax rates are different with buy transactions and sell transactions.   Take a look at the website or whitepaper to learn more about the exact percentages.  As an added benefit, portions of the tax are also auto-distributed to the liquidity providers, marketing, buyback, and additional burns.   Forget trying to trade for a small profit.  Of course, you can still do that if you wish, but HyperDoge’s reflection-based tokenomics makes it a no-brainer as a passive income-generating strategy.

HyperDoge Is Headed To Mars!

Dogecoin went to the moon with no real utility behind their coin.  HyperDoge maximizes earning potential without ever requiring you to make any trades.  Their hyper-deflationary model ensures that the scarcity of the tokens will exponentially increase over time, which translates to a proportional increase in value per $HYPERD token.  Because their token distribution creates a localized market through their liquidity pool, their transactions feed reflections to HODLers with passive income.   Take a look at all of the Shiba Inu-themed meme coins out there.  They’re meme coins for a reason.  No reflections, no utility, and no ecosystem means they will always remain what they truly are – just another meme coin.Website : https://hyperdoge.finance/Telegram : https://t.me/hyperdogeofficialInstagram : https://www.instagram.com/hyperdogeofficial/?utm_medium=copy_linkTwitter : https://twitter.com/hyperdogetoken?s=21Medium : https://hyperdogeofficial.medium.com/

Dogecoin (DOGE) $ 0.081739
We use cookies to personalise content and ads, to provide social media features and to analyse our traffic. We also share information about your use of our site with our social media, advertising and analytics partners who may combine it with other information that you’ve provided to them or that they’ve collected from your use of their services.
Accept
Read more
Change Settings
Cookie Box Settings
Cookie Box Settings