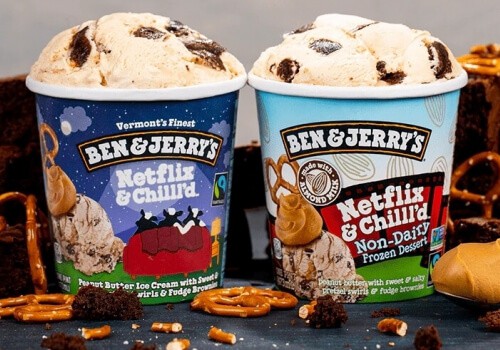 Contents hide
1 In brief: Ben & Jerry’s is hoping to make your next Netflix binge session a bit sweeter (and saltier) with the introduction of the first “Netflix Original Flavor” ice cream.
2 Related Reads

In brief: Ben & Jerry’s is hoping to make your next Netflix binge session a bit sweeter (and saltier) with the introduction of the first “Netflix Original Flavor” ice cream.

The new flavor, officially titled Netflix & Chill’d, features a peanut butter base with sweet and salty pretzel swirls and fudge brownie chunks. The name is a play on the popular phase “Netflix and chill” which as of late, has become a euphemism for sexual activity.

Ben & Jerry’s is also planning a non-dairy version made from almond milk.

The company hasn’t yet revealed when its new creation will be available although interested parties are invited to sign up for the e-mail newsletter to be among the first to know.

This isn’t the first frozen treat tie-in for Netflix. Last summer, the streaming giant partnered with Baskin-Robbins to open a handful of Scoops Ahoy pop-up stores to promote Stranger Things 3. The ice cream chain even added a new flavor to their nationwide menu, U.S.S. Butterscotch, that was inspired by the show.

The pop-ups and flavor were limited-time offerings. With any luck, the new Ben & Jerry’s offering will stick around for a bit longer, giving interested individuals more time to sample it.