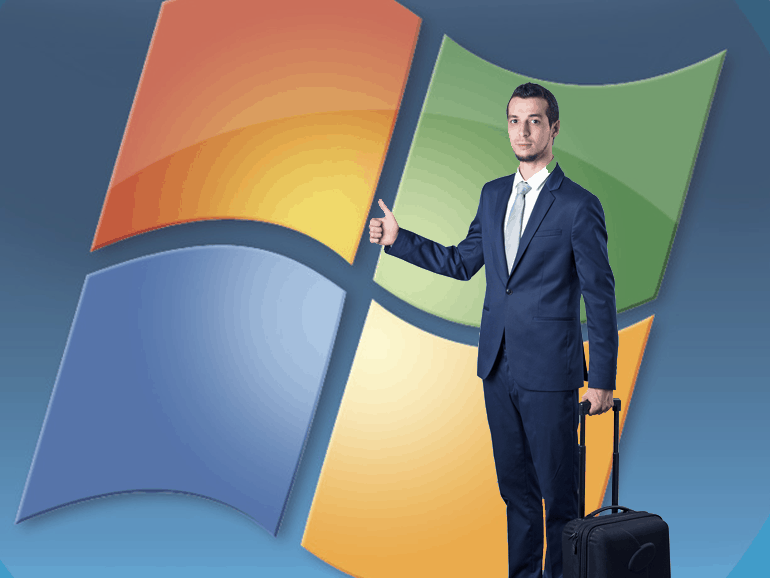 If your business is still running on Windows 7, you have some important decisions to make, and very little time remaining. Windows 7 support officially ends is hours away — on January 14, 2020. After that date, Microsoft will stop delivering security updates automatically, and by then many third-party vendors will have dropped support as well.

Most businesses completed their planning for migration to Windows 10 long ago and are in the final stages of implementing that plan. If you’re still procrastinating or have unresolved incompatibilities, it’s time to get serious. (And just to make sure you’re aware of the upcoming deadline, Microsoft is displaying pop-up notifications on Windows 7 PCs as the deadline approaches. After the deadline passes, you’ll be greeted with a full-page message warning you that your operating system is no longer supported.)

You have, by my calculation, four options. Which one you choose depends on why your organization is still clinging to Windows 7.

If the main reason is inertia, you’ll need to find something to motivate yourself. You could, for example, calculate the costs of cleaning up after a successful ransomware attack that spreads over your network, including the loss of business while you scramble to recover.

If you’re in a regulated industry, you might want to find out whether running an unsupported, unpatched operating system puts you at compliance risks, which can result in hefty fines and a loss of business when customers find out.

If your business depends on specialized hardware or line-of-business software that absolutely will not run on Windows 10, you might be able to make a case for paying to extend the support deadline. But that just delays the inevitable by a year or two, or at most three. Your search for a replacement should be well under way by now.

So, what are your options?

Because I know that at least a dozen people will offer one particular suggestion in the comments to this post, let me bring it up right at the top of the list.

Something tells me that most businesses that have stuck with Windows 7 until nearly the bitter end have already considered and rejected this option. That’s especially the case for those businesses that are constrained by compatibility issues related to a mission-critical Windows app.

But sure, if you’re willing to completely replace your desktop infrastructure and switch out every productivity app you use, that’s a preferable alternative to the next option on the list.

On January 15, 2020, Windows 7 won’t stop working. In fact, you’re unlikely to notice any changes. If you feel lucky, this is certainly an option. You might even consider the lack of monthly updates a welcome feature.

Spoiler alert: This is a very bad idea, one that exposes you to all manner of possible bad outcomes.

If you absolutely must keep one or more Windows 7 PCs in operation, perhaps because they’re running a critical app or controlling a piece of old but essential hardware, the best advice I can offer is to completely disconnect that machine from the network and lock it down so that it only runs that one irreplaceable app.

When Windows XP support ended in April 2014, Microsoft offered to continue delivering patches for XP devices owned by large organizations that paid for Custom Support Agreements. But those contracts didn’t come cheap. Only very large enterprise customers could even qualify for one, and then the cost was literally millions of dollars, as my colleague Mary Jo Foley discovered.

For Windows 7, the extended support option is far more democratic. In September 2018, Microsoft announced its plan to offer paid Windows 7 Extended Security Updates (ESUs), and in October 2019 the company announced that it was extending this support to businesses of all sizes. You won’t need megabucks, either: The annual cost for an ESU contract covering calendar year 2020 is roughly $50 per device (although your reseller might charge more), with that price tag going up to $100 in year two and $200 in year three.

That escalating price schedule is intended to serve as a disincentive to Windows 7 users who might otherwise be tempted to kick the can a little further down the road. You’ll also need to find a reseller that is a member of the Cloud Solution Provider program and can deliver the ESU licenses you require. As I discovered when I tried to do just that, this isn’t as easy as it might sound.

Customers who have paid for Windows Software Assurance contracts or who have Windows 10 Enterprise or Education subscriptions will get a discount but will still be subject to significant price hikes in years 2 and 3.

You can eliminate the extra cost of Windows 7 Extended Security Updates completely if you move your workloads to virtual machines in Microsoft’s Azure cloud. That option will be available using the new Windows Virtual Desktop option, which should be available as a preview soon. For businesses that only need to virtualize individual line-of-business applications, this could be a cost-effective option.

Option 4: Bite the bullet and upgrade.

If you don’t have any compatibility issues that need to be addressed first, the simplest and most straightforward route is to put together a deployment plan and begin executing it. But the details of that plan matter, especially if you want to avoid the headaches of the “Windows as a service” model.

As always, of course, the easiest upgrade path is via hardware replacement. Any device that’s five years old or more is an obvious candidate for recycling. Devices that were designed for Windows 10 and then downgraded to Windows 7 should be excellent candidates for in-place upgrades, after first making sure that the systems have the most recent BIOS/UEFI firmware updates.

For systems that were sold between 2013 and 2015 with Windows 8 licenses and then downgraded to Windows 7, you might be able to save some money by installing Windows 8.1 (no additional license payment required) and then using a third-party utility like Classic Shell to replicate the Windows 7 look and feel. Doing this gets you three years of no-cost additional support, good until January 10, 2023.

For businesses that choose a Windows 10 upgrade, one not-so-obvious factor to consider is which Windows 10 edition to deploy. The default choice for most businesses is Windows 10 Pro, but I strongly suggest considering an additional upgrade to the Enterprise (or Education) edition.

Yes, machines running Windows 10 Pro allow your admins to defer feature updates, but the support schedule for Enterprise/Education is significantly longer: up to 30 months, as opposed to 18 months for Pro  (For a description of the new support schedule, including a chart that explains how the new schedule works, see “Windows 10 Enterprise customers will now get Linux-like support.”)

The other advantage of moving to the Enterprise/Education editions is the availability of a new support offering called Desktop App Assure. If you encounter a compatibility issue during the upgrade, you file a support ticket and get engineering support to resolve the issue.

For most businesses, the Windows Enterprise E3 and E5 subscription options are probably the easiest and most cost-effective here.

Whichever option you choose, though, now’s the time to get to work. That ticking sound is going to be deafening after January 14, 2020.