5th Element to Help Fuel 5ire as It Connects Web 3.0 With UN Sustainable Development Goals in Bid to Become Next Unicorn

DELHI, India, — In a wire release today, 5th Element Group PBC announced a global partnership with 5ire, the Web 3.0 venture that has launched onto the world stage with the velocity and impact trajectory of a unicorn.

5th Element opened its Delhi office in 2019 under the leadership of Pratik Gauri as its country President with a mission to partner with five iconic Indian brands that could help lead India toward what the company referred to as “The 5th Industrial Revolution.” The 5th Industrial Revolution (or “5IR”) would be about bending frontier technologies back toward the service of humanity.

A manifesto for 5IR was presented by Gauri and 5th Element co-founder Jim Van Eerden in an article presented to the 2020 World Economic Forum. Entitled What the 5th Industrial Revolution Is, And Why It Matters, the article gained much attention — especially from brand executives reached through media outlets like Real Leaders, YPO’s signature magazine.

In the launch phase, with 5th Element support, Gauri helped co-found 5ire as a Web 3.0 flagship brand alongside Vilma Mattila and Prateek Dwivedi. In just months, 5ire has fast become an iconic Indian brand itself, with all the makings of a standout tech unicorn. The company raised $21 million in its seed round last month and has already released information on a blockbuster Series A Round slated later in the first quarter of this year.

“Following success with brands that have advanced the Sustainable Development Goals in India in quite remarkable ways, like RB and its Mission Panni initiative for clean water and hygiene, 5th Element’s India strategy will now pivot to focus on feeding the 5ire unicorn,” Van Eerden said. “We believe that 5ire will revolutionize the way that blockchain and Web 3.0 can create an inclusive economy that makes our world more sustainable. 5ire represents a once-in-a-generation opportunity, and is worthy of our most ambitious focus.”

5ire’s primary offering is 5ireChain, a first-layer, sustainability-driven, fifth-generation blockchain that ensures adherence to the philosophy of 5IR to create a net positive impact on the planet and to the service of humanity.

“5ireChain intends to create nothing less than a paradigm shift from a for-profit to a for-benefit economy,” said Gauri. “5ire will facilitate self-sovereign, decentralized organizations that are empowered and incentivized toward accelerating the implementation of the United Nations’ Sustainable Development Goals. This venture is truly revolutionary and we believe 5ire will soon be a household name.”

5th Element has worked closely with the UN since the company’s founding in 2018 to help some of the world’s leading legacy and next-gen brands, like 5ire, prove the thesis that “organizations can perform better by doing more good.”

“The principals of 5th Element have been friends of the United Nations for years and are global champions for the Sustainable Development Goals in numerous ways. 5th Element champions the SDG framework at UN events, and events around the world, as well as with their investor, donor, NGO, and brand clients,” said Will Kennedy, Senior Programme Officer for the UN Office for Partnerships. “I recommend 5th to leader brands wholeheartedly.”

5th Element Group PBC is a global impact consultancy, organized as a Public Benefit Corporation. Described by Forbes as “an outstanding global brain trust network” and by Real Leaders magazine as “the Maestro of the Omniwin,” 5th Element has earned a reputation worldwide for creating unprecedented partnerships that grow enterprises, attract top talent, and result in a positive impact on society and the environment. Working in partnership with leader brands and some of the most respected non-profit organizations, the 5th team is focused on proving the thesis that brands can perform better by doing more good. www.5thelement.group

5ire is a blockchain ecosystem that brings forward Sustainability, Technology and Innovation to build the 5th Industrial Revolution (“5IR”). Founded by Pratik Gauri, Prateek Dwivedi and Vilma Mattila, the mission of the 5ire ecosystem is to embed the for-benefit paradigm at the heart of blockchain, highly incentivize practices that align with the United Nations Sustainable Development Goals (“SDGs”), facilitate the transition from the 4IR to 5IR, and accelerate the implementation of the UN 2030 Agenda for Sustainable Development. The company’s primary offering is 5ireChain, a first-layer, sustainability-driven, fifth-generation blockchain that ensures adherence to the philosophy of 5IR by creating a net positive impact on the planet and by serving humanity. www.5ire.org 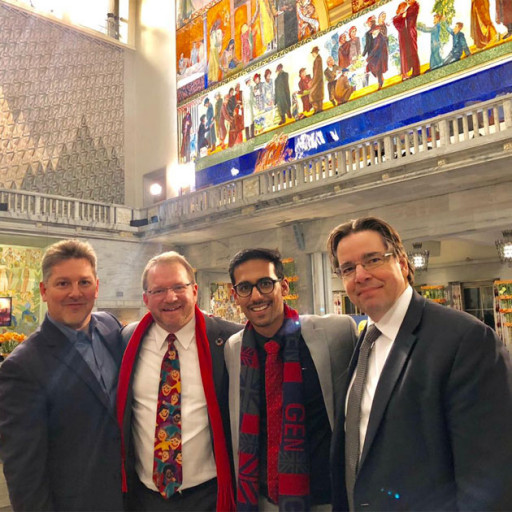