To Further Strengthen the Business Partnership and Cooperation

HONG KONG, March 17, 2022 (GLOBE NEWSWIRE) — Xeno Holdings announced that it has strengthened business cooperation with FSN (214270), a KOSDAQ-listed company, as a major blockchain business partner, by investing in FSN shares.

Xeno Holdings acquired 400,000 shares of FSN management’s stock as an ongoing mutual commitment to cooperate in all areas of businesses including the blockchain projects that are underway. The stock transaction was conducted through Xeno Investment Asia, a subsidiary of Xeno Holdings. As a sign of goodwill and trust, the two companies decided to delegate all voting rights to J2B, the largest shareholder and a close business ally of FSN management.

Xeno Holdings, a Hong Kong-based investment company specializing in technology, holds a leading position as an investor and incubator for multiple business ventures including artificial intelligence services and global SaaS platforms. Also, as the operator for proprietary services like Xeno NFT Hub, a one-stop NFT marketplace, and Xeno Labs, a community-based NFT and metaverse service for the past two years, Xeno Holdings has been building its presence in the respective industries.

Xeno Holdings and FSN have been working together on several blockchain projects, including the NFT project with Six Network, an FSN subsidiary, in January. And today’s transaction was a result of a multifaceted collaboration including a series of joint investments in the past.

The upcoming NFT marketplace project that both companies are currently focusing on is gaining momentum. FingerLabs, an FSN’s blockchain research arm, and Xeno Labs have been jointly preparing for a new NFT marketplace service that is expected to launch at the end of March. In addition, the two companies are discussing potential issuances of IP-based NFTs ranging from games and movies, including general videos and sound sources.

Lee Sang-Seok, CEO of FSN, said, “Since signing the MOU, both parties have actively sought out ways to cooperate, in order to grow and expand our businesses together, and the equity investment was a crucial milestone in this effort. He continued, “The voting rights were delegated to FSN, and this allows us to safely maintain our management rights as the majority shareholder and signifies our solid partnership and ongoing commitment for business cooperation with Xeno Holdings.”

*All voting rights held by Xeno Holdings are delegated to FSN management.

*Active business cooperation is expected to begin starting with the new NFT marketplace service to be unveiled at the end of March. 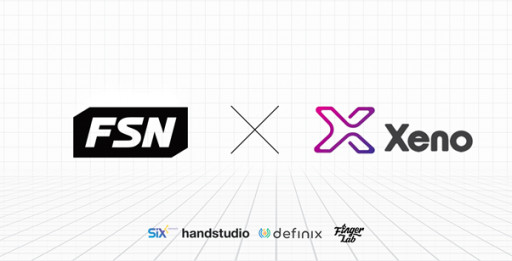 Polkadot (DOT) $ 9.56
We use cookies to personalise content and ads, to provide social media features and to analyse our traffic. We also share information about your use of our site with our social media, advertising and analytics partners who may combine it with other information that you’ve provided to them or that they’ve collected from your use of their services.
Accept
Read more
Change Settings
Cookie Box Settings
Cookie Box Settings