Bitcoin dominance has risen to an all-time high this year. At its current levels (66.7%), many wonder if altcoins will rise again. Many factors are responsible for the recent fall in the dominance of altcoins. 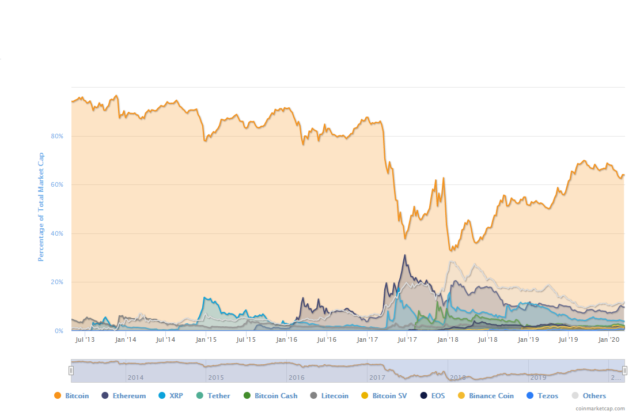 They shall be considered serially.

Many projects within the cryptospace had become “white elephant” projects in 2017 and 2019. 2017 gave the world the crypto-bubble. Many of the projects that existed then turned out to be scams. 2019, however, was a return from crypto winter. Many of the altcoin projects still hadn’t gained any traction.  The levels of trust that the world had concerning cryptocurrencies had fallen.  As such, instead of the use of Initial Coin Offerings as a way of raising funds, we now have Initial Exchange Offerings (IEOs). The requirements for an IEO listing are even stricter than those of ICOs.

People still regard altcoins as a failed concept due to their high failure rates.  As such, investors still flock to Bitcoin as a safe haven for their assets.

Many Altcoins 2020 are Centralized

Decentralization is a key concept as far as cryptocurrencies are concerned.    Many of the altcoins that have appeared on the scene are extremely centralized. As such, the trustless concept can’t be implemented. Independence of the cryptocurrency token on the ledger can’t be assured.

The reason for this is the Byzantine General’s problem. This is the foundation for the existence of the public ledger system. The concept of not trusting the next guy but the independence of the public ledger has contributed significantly to Bitcoin’s dominance of the cryptospace so far.  Investors love the allure of the concept and as such have bought into it.  No single entity or group of entities can control Bitcoin prices.  This will prove to be true again further down the line.

Altcoins are Subject to Market Manipulation

Altcoins due to their centralization are subject to manipulation by the markets. This has been proven severally within the cryptospace.  As such, market manipulation for Altcoins is highly likely.  This has also led to many “pump and dump” schemes that investors in altcoins involve themselves in regularly.

Thanks to the altcoins, cryptocurrency tokens now have all sorts of uses. From logistics to education, fashion to travel. The altcoins have enabled new ecosystems to be created. It has also allowed for new entrants to the cryptospace.  We may not yet see the use-case scenarios and their effectiveness, but we will see that in the coming decade.

Altcoins provide humanity with more reasons for people to trust cryptocurrency tokens. Without trust, there can’t be any form of transaction value. As such,   the introduction of altcoins enables transactions to go through.

Bitcoin as a first-generation cryptocurrency is already having some serious competition when it comes to popularity. The main issue, however, is how this popularity contest will end.   The ultimate challenge to Bitcoin’s dominance is something that many people will consider when coming into the cryptospace.  This won’t be the final deciding factor that determines their decisions. Bitcoin’s competition may change the way we look at the cryptocurrency community. Altcoins are that competition.

Altcoins though as a matter of functionality solve problems. These problems must also be real-world problems. Otherwise, they will also follow the dustbin of history like other technologies that have followed this course.

Developers must also understand that its neither how beautiful the code is nor what it can do that matters these days. It is rather about what problems the code can solve. This is how the Altcoins shall rise again.