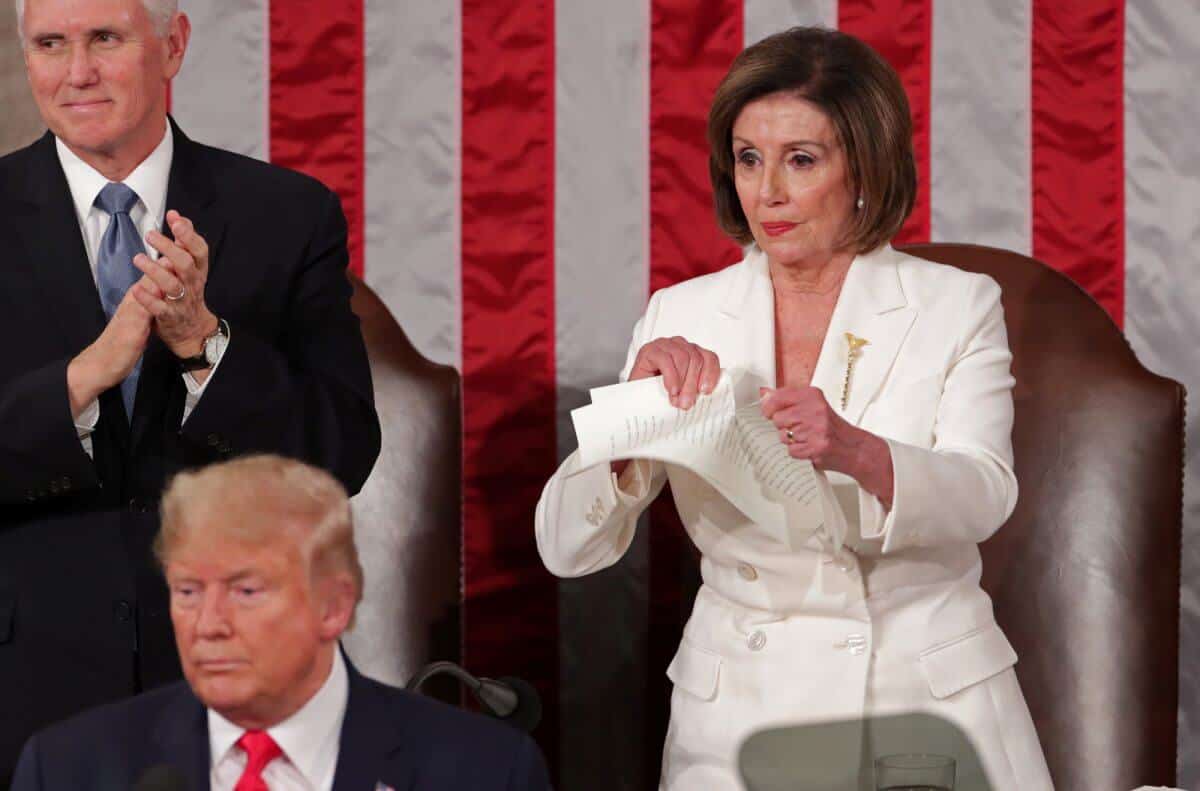 Just hours before the State of the Union Address, Donald Trump said it would be “extraordinarily low-key.” That surprised reporters, who were sure Trump would have something to say about the impeachment proceedings and trial.

But Donald Trump kept the address focused on America, not himself. His third State of the Union speech was remarkably magnanimous and presidential.

He did decline to shake Speaker Nancy Pelosi’s hand. She offered a handshake as he took the dias, and Trump rebuffed her. Pelosi appeared to have some nervous energy.

The last time they were in a room together the two exchanged insults. It was during an October meeting in the White House over Syria policy. Trump reportedly called Pelosi “a third grade politician.” Each accused the other of having a meltdown.

But it was Nancy Pelosi who had a meltdown during the State of the Union. When Donald Trump finished giving his speech, she tore a transcript of it in two.

As Trump began to speak, Republicans broke into chants of:

But not all those present were so enthusiastic. And not all members were even present.

Rep. Alexandria Ocasio-Cortez announced Tuesday afternoon that she would be boycotting the State of the Union Address. She said her presence would “legitimize” Trump’s subversion of the Constitution.

These are clearly Democrats in safely deep blue districts. But Sen. Kyrsten Sinema (D-AZ) barely won her 2018 Senate election. She could be seen frequently clapping for Trump’s remarks even when other Democrats were giving blank stares.

Sens. Bernie Sanders and Elizabeth Warren were also missing from the Capitol. But it’s no slight. The two are in full campaign mode, making stops in New Hampshire instead.

State of the Union Highlights

Donald Trump boosted the Space Force. He also called for another space program to put an American man– and woman– on the Moon. He also wants to put people on Mars.

I am asking the Congress to fully fund the Artemis program to ensure that the next man and the first woman on the moon will be American astronauts– using this as a launching pad to ensure that America is the first nation to plant its flag on Mars.

Jobs are booming, incoming is soaring, poverty is plummeting… and our economy is thriving and highly respected again.

But he’s also totally rejected “the downsizing” of the federal deficit.

The United States has become the number one producer of oil and natural gas anywhere in the world by far. With the tremendous progress we’ve made over the past three years, America is now energy independent.

And gave Rush Limbaugh the Presidential Medal of Freedom. Limbaugh recently revealed that he has advanced lung cancer. He appeared to wipe away tears as Melania Trump presented him with the medal.

I call on Congress to pass the Education Freedom Scholarships and Opportunities Act. No parent should be forced to send their child to a failing government school.

And promised to protect patients with preexisting conditions: