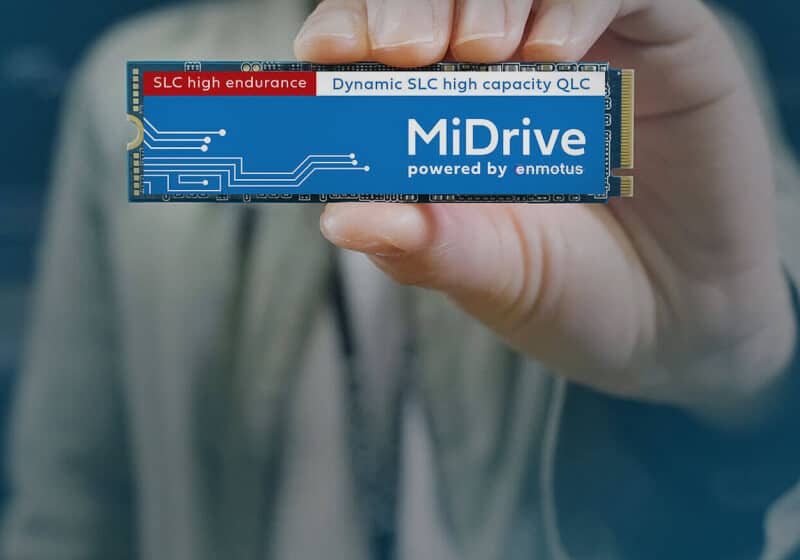 Enmotus is about to become the Dr. Frankenstein of SSD manufacturers by mixing two somewhat opposing solid state storage technologies. On a single M.2 stick, they’ll take the slowest and fastest forms of NAND and blend them together to make one drive that can hopefully satisfy all demands.

SLC (single-level cell) storage has just one bit per cell, which makes it the fastest and most enduring form of NAND. The recently developed QLC (quad-level cell) storage offers four bits per cell and thus quadruple the density, making it much better value but also slower and less durable.

QLC drives generally allocate a few gigabytes as a cache to improve speeds. The MiDrive works in reverse, with a primary SLC component and a bonus QLC section to store files that are rarely accessed. A custom Phison controller is used to switch files between the SLC and QLC, which happens seamlessly in the background.

Enmotus hasn’t said exactly how much of the SSD is SLC — the total capacity is 1TB — but in their press material, they describe it as containing the operating system, essential files and even games.

Enmotus is offering a five-year warranty on the drives, which is a nice bonus over the three years most QLC drives come with. Exact specifications are still sparse, and no pricing yet, but the company is sampling to OEMs. As with other CES announcements, we’ll eventually see if this concept catches on or not.