During Computex 19, ASRock unveiled its X570 Aqua motherboard which we since reviewed, which is currently one of the most stunning desktop models in existence. The new ASRock Z490 Aqua builds upon the success of its AMD based model, with a full cover block monoblock which cools the CPU and the 16-phase power delivery. Following the same design as the X570 model, the ASRock Z490 Aqua adds an OLED display which can display with CPU voltages, temperatures, system and POST statuses, with an abundance of premium controllers and features onboard. 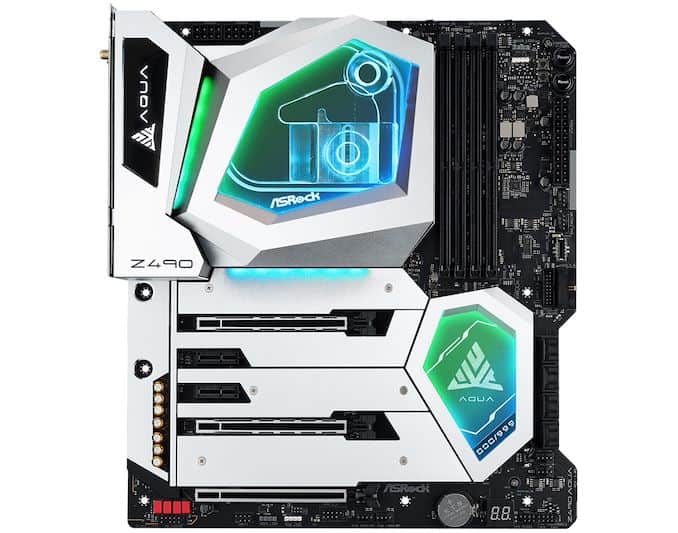 Included in the long list of features are three full-length PCIe 3.0 slots which run at x16, x8/x8, and x8/x8/+4, with two PCIe 3.0 x1 slots. It uses a 16-phase power delivery which is kept cool by the large monoblock, and benefits from 90 A power stages with a maximum Vcore current of up to 1260A. Providing power to the CPU is a pair of 8-pin 12V ATX CPU power inputs, with an Intersil ISL69269 PWM controller operating in a 14+2 configuration. There is support for DDR4-4700, with a total capacity of up to 128 GB across four memory slots. It does have support for ECC DDR4 UDIMMs, but these will operate in non-ECC mode. 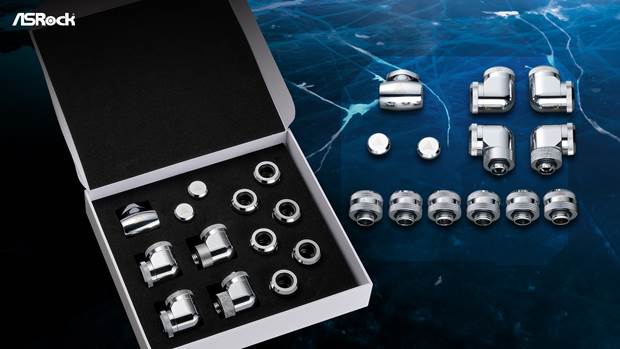 New for the Z490 Aqua is a pack of hardline water cooling fittings which come in the board’s accessories bundle. This includes six knurled silver straight fittings, four 90° right-angled fittings, with a filling and drawing value, and two stop-cap fittings with the Aqua logo, all packed into a nice presentation box.

The rear panel of the ASRock Z490 Aqua is stacked with two Thunderbolt 3 Type-C and two accompanying Mini DisplayPort input ports. Also present are three USB 3.2 G2 10 Gbps Type-A, one USB 3.2 G2 10 Gbps Type-C, and four USB 3.2 G1 Type-A ports. For users intending to leverage Intel’s integrated graphics, there is a single HDMI video input. For users demanding premium networking, the Z490 Aqua is using an Aquantia AQC107 10 G and Realtek RTL8125BG 2.5 Ethernet controller pairing, as well as an Intel Wi-Fi 6 wireless interface which provides support for BT 5.0 devices. There are five 3.5 mm color-coded audio jacks and S/PDIF optical output which are powered by a Realtek ALC1220 HD audio codec, which is assisted by an ESS Sabre 9128 DAC which controls the front panel audio. Finishing off the rear panel is a clear CMOS switch and a BIOS Flashback button.

The ASRock Z490 Aqua is expected to weigh a considerable amount when all the aluminium, the backplate, and custom monoblock is factored in; the ASRock X570 Aqua for reference weighed a whopping 2.5 kg (~5.5 lbs). Only 999 units will be available for purchase which will add an element of exclusivity, which we expect to add to the price tag.

ASRock hasn’t unveiled pricing at this time, but we expect the Z490 Aqua to be available either at the launch of Intel’s 10th Generation Comet Lake processors or shortly after.