Highly anticipated: Samsung will be holding the Unpacked 2020 event in a wholly-virtual manner next week, so it has prepared several big announcements alongside the much-awaited Galaxy Note 20 smartphone series. The company is promising “exclusive access to untold stories from developers, designers, innovators inside Samsung Digital City, the heart of Samsung.”

Samsung has released a teaser trailer for next week’s Unpacked event, showing off no less than five new devices. Some of these have appeared in leaks, such as the bean-shaped Galaxy Buds Live that are supposed to offer noise cancellation and a 4-hour battery life despite being quite compact compared to traditional wireless earbuds.

Then there’s the successor to the original Galaxy Fold, which is expected to be powered by Qualcomm’s Snapdragon 865 Plus and could come equipped with five rear cameras. Samsung is said to have improved the reliability of the fragile OLED screen through small tweaks to the original design, but most enthusiasts can only hope the new variant will come at a more affordable price.

The Galaxy Note 20 will be the event’s main course, and we already know some of its details thanks to extensive leaks, plus the fact that it shares some DNA with the Galaxy S20. For instance, the Note 20 Ultra will feature a folded periscope zoom lens, although it will reportedly only go to 50x zoom and the sensor will have a lower resolution of 12 megapixels, presumably to improve low-light performance. 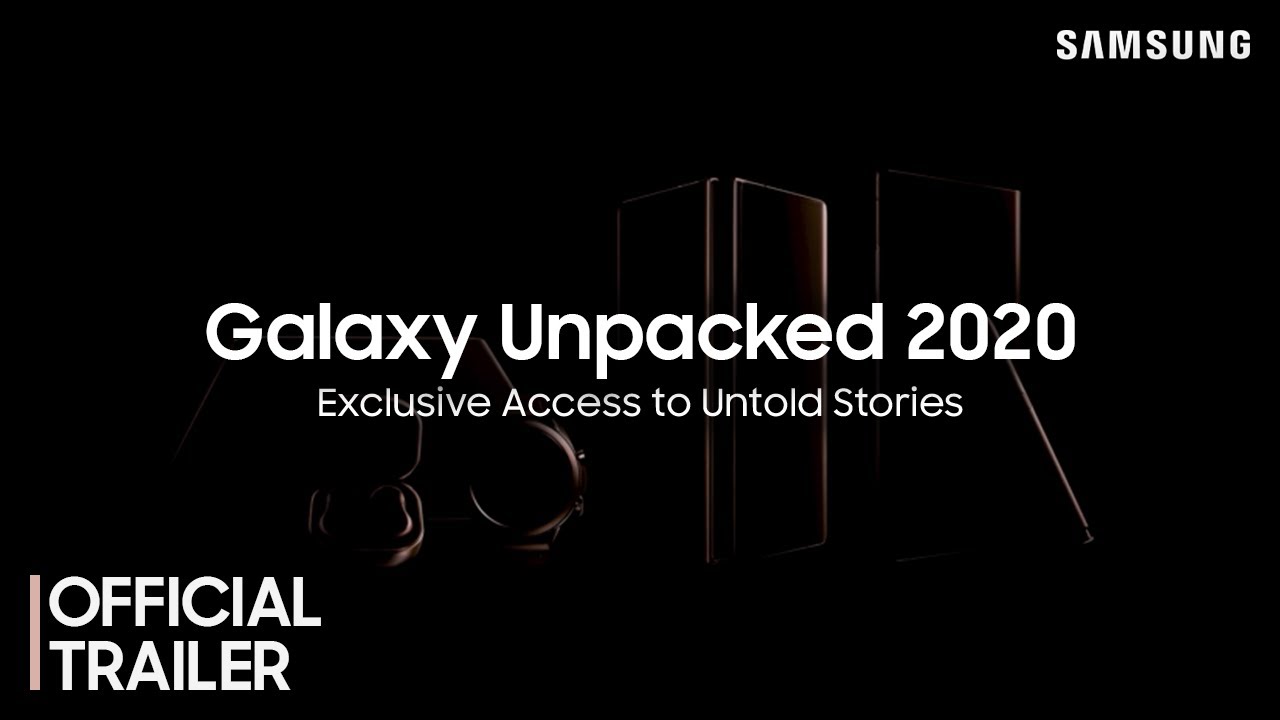 The standard Note 20 will apparently be a “Lite” version of the Note 20 Ultra, with a lower resolution display that works at a standard 60 Hz refresh rate, will pack less RAM, and a different camera configuration. Meanwhile, the Note 20 Ultra will be a no-compromises flagship equipped with a higher resolution LTPO (Low Temperature Polysilicon Oxide) display that supports refresh rates of 1 to 120 Hz, allowing it to be more power-efficient.

Also visible in the short trailer are the silhouettes of a tablet and a smartwatch. One is no doubt the Galaxy Tab S7, which is rumored to have a 120 Hz display and possibly 5G connectivity.

The second is the Galaxy Watch 3, which was revealed in full last week. It appears to have a rotating dial similar to the first generation, while the Tizen operating system should bring new gesture controls for answering calls and controlling your smartphone’s camera.

Samsung’s Galaxy Unpacked will be filled with hardware announcements, so one has to wonder if the company doesn’t have bigger plans it has yet to reveal with its new Samsung Money debit card. It might just follow in Apple’s footsteps and launch interest-free instalment plans for these new products.