0Shares
Contents hide
1 Forward-looking: When we first heard Nvidia was launching new RTX Super GPUs for laptops, we assumed we’d be getting a boring small bump. Well, it turns out that they’ve prepared some cool new technologies for this generation. Yes, the small bump is still there, but we’re getting new tech and price cuts which makes for a compelling new generation of gaming laptops.
2 Related Reads

Forward-looking: When we first heard Nvidia was launching new RTX Super GPUs for laptops, we assumed we’d be getting a boring small bump. Well, it turns out that they’ve prepared some cool new technologies for this generation. Yes, the small bump is still there, but we’re getting new tech and price cuts which makes for a compelling new generation of gaming laptops.

First, let’s just look at the line-up and specifications to get that out the way. There are three new parts being introduced today: the RTX 2080 Super, the RTX 2070 Super, and the GTX 1650 Ti. Clock speeds and power targets vary between each of these models, the lower end of the spectrum will typically be the Max-Q variant, and the upper range is the full performance or “Max-P” model.

The two Super models offer the same core configuration as the desktop parts, so 3072 CUDA cores for the RTX 2080 Super up from 2944 in the non-Super model, and 2560 for the RTX 2070 Super up from 2304. However, while the desktop variants also pushed up clock speeds in addition to adding more cores, we’re seeing the opposite with the Super line-up on laptops: cores have increased, but clocks have decreased slightly to fit within the same power envelope. 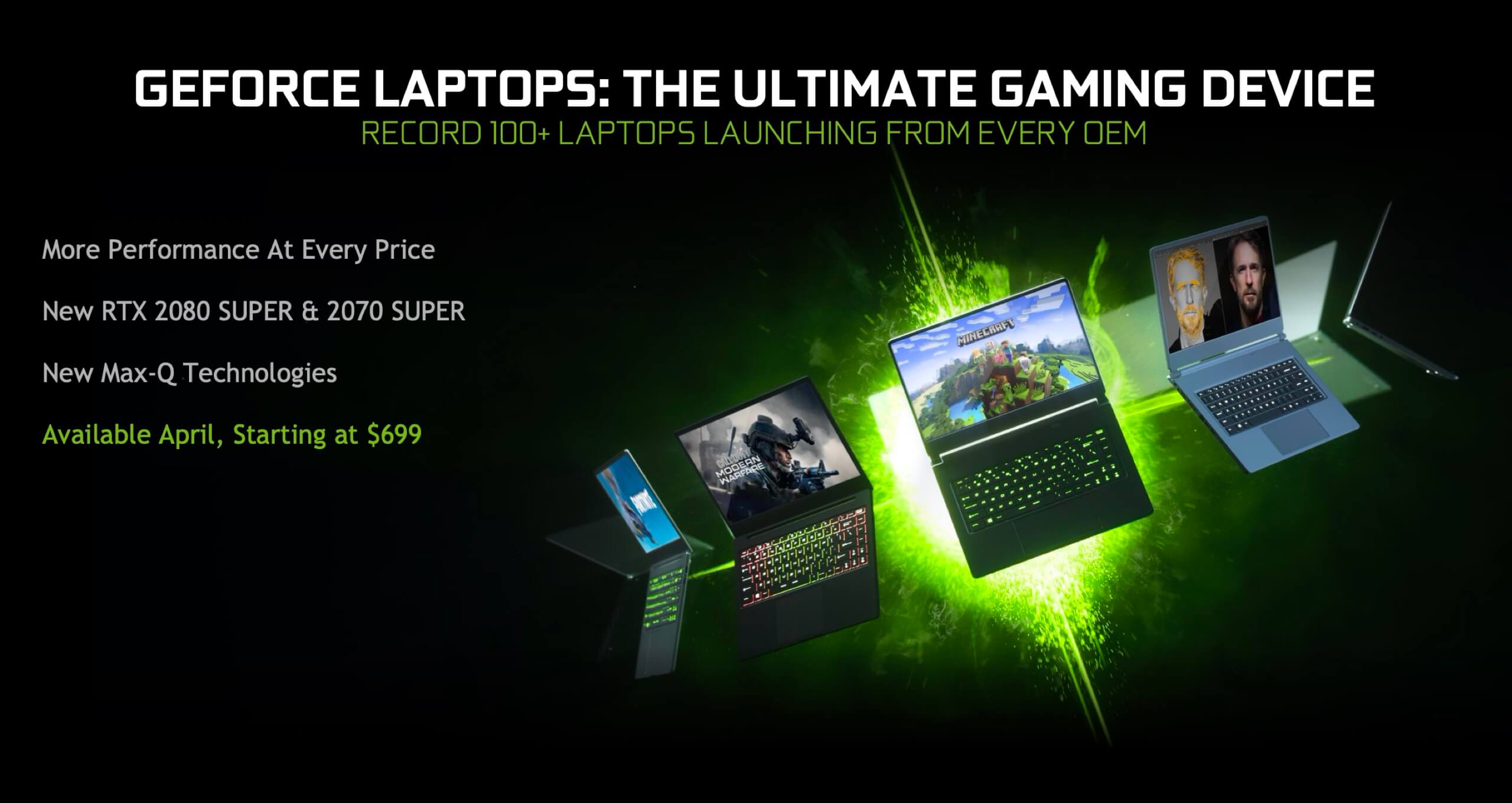 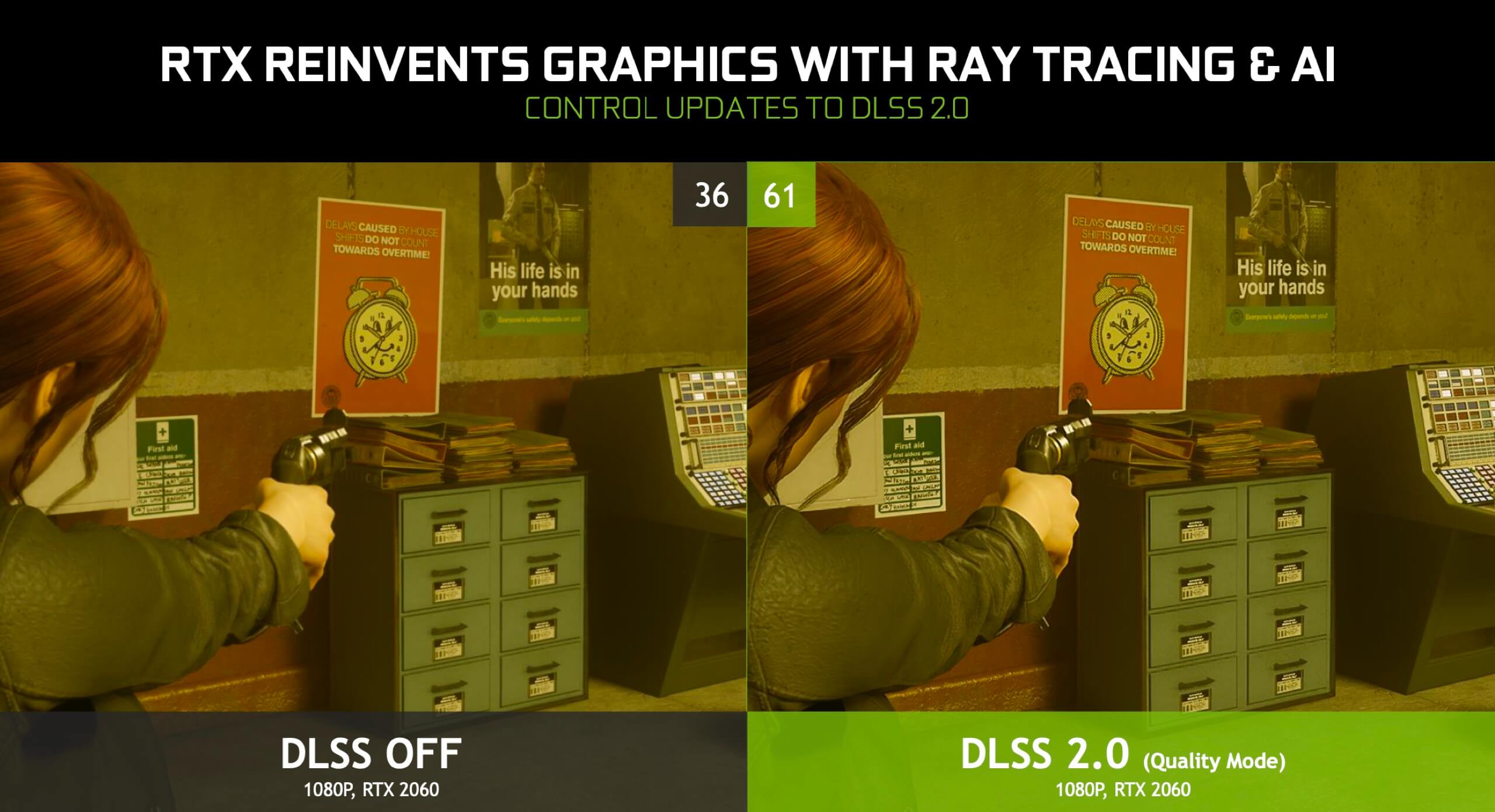 DLSS 2.0 is a big part of Nvidia’s new performance push for ray tracing. We’ve tested it already, and it works!

The GTX 1650 Ti is also new, but it’s not clear why this part exists. It offers the same 1024 CUDA cores as the GTX 1650, at the same power target, with similar clocks and the same memory system. Perhaps this is an attempt to distinguish the top-end GTX 1650 configuration from some of the lower-end configurations that use GDDR5 for example.

It’s also interesting to note that the existing RTX 2070 and RTX 2060 will remain in the market for now, but with slightly altered specifications. In what is no doubt going to be confusing for customers, previously the RTX 2070 was listed with an 1185 to 1440 MHz clock. Now that’s inexplicably 1125 to 1455 MHz. Same with the RTX 2060, this GPU is now available in a 115W configuration, rather than the 90W it topped out at previously. 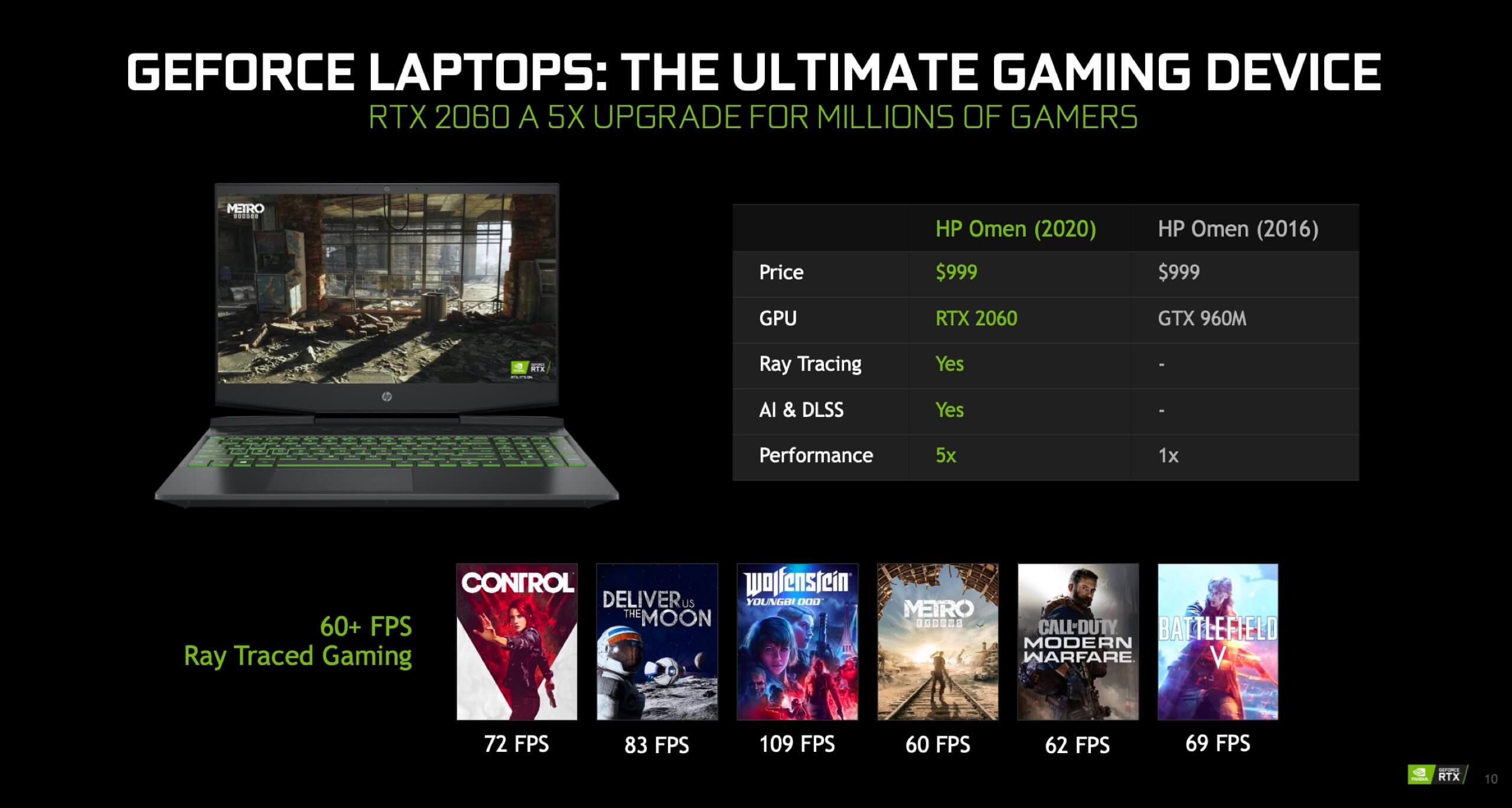 Nvidia is not addressing the confusion surrounding the naming of these parts and the different performance configurations that will be available either. Each GPU will still have multiple TDP options, such as 80W and 90W for the RTX 2060. Then there will be Max-Q options as well. The end result is there could be many different GPU options all with “RTX 2070” branding when you factor across the Super and non-Super models, the Max-Q and non-Max-Q models, and all the different power configurations. Calling a GPU the “Nvidia GeForce RTX 2070 Super Max-Q” is quite ridiculous if we’re honest, and that doesn’t even tell us which power config we are getting and thus the expected performance output.

Moving on to new features, changes and technologies…

Nvidia has lowered the pricing across their line-up to fit in these new Super GPUs. Laptops that previously included the GTX 1660 Ti should now be able to offer the RTX 2060 at the same price. Same with the RTX 2060, that should become an RTX 2070 category, with the new Super products taking on the top-end of the market. This leaves the 1660 Ti and 1650 Ti replacing what used to be 1650-class laptops. The end result is Nvidia expects the RTX 2060 to be available in $1,000 laptops, and the GTX 1650 at $700. 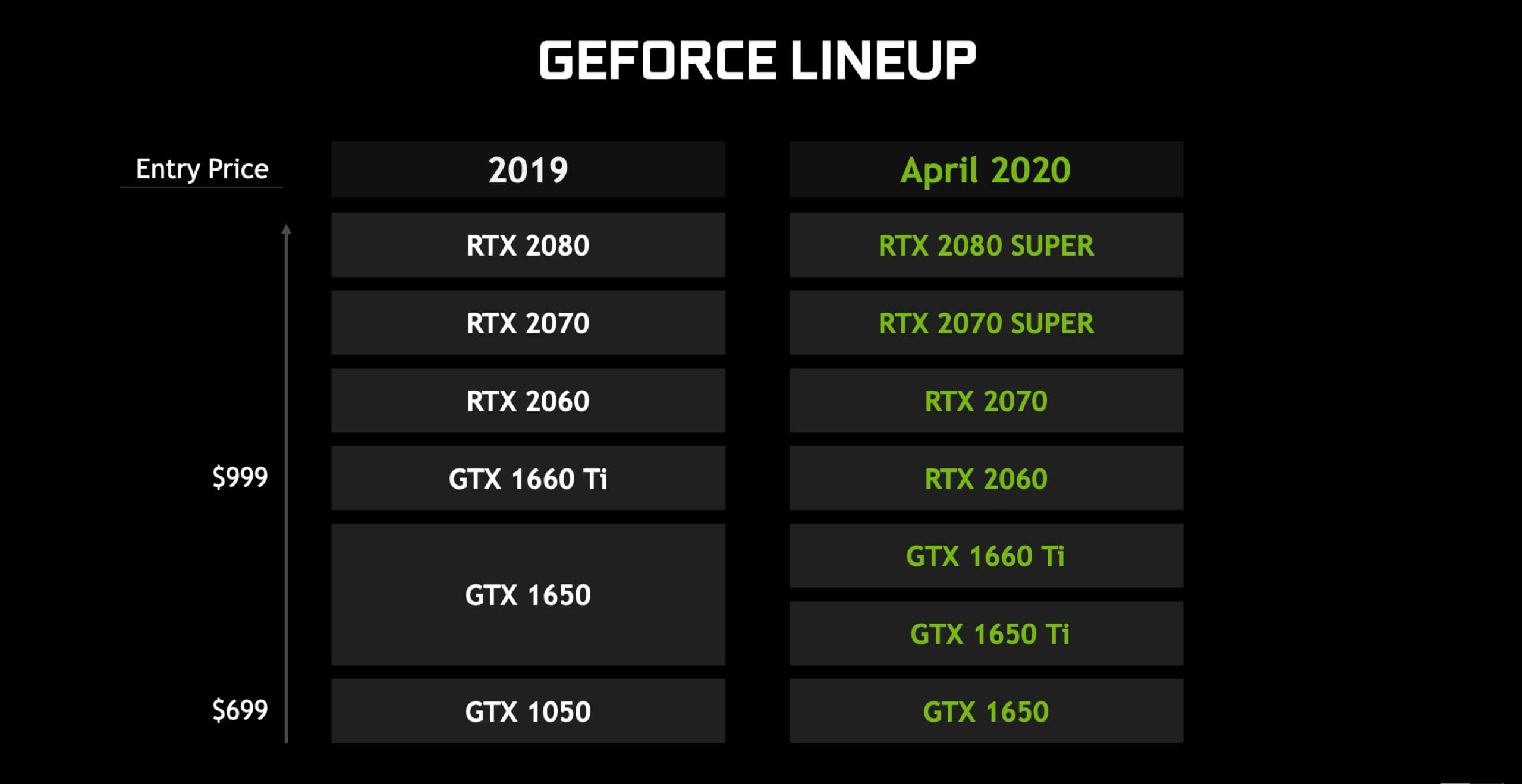 Nvidia has been working on enhancements to Max-Q, which is their high efficiency GPU program. With this new generation we can expect more efficient components as a start, including new lower voltage GDDR6 modules and improvements to voltage regulators. This means more power and thermal budget available for the GPU, so these Max-Q laptops should perform better overall.

Another really cool new feature is Nvidia’s version of AMD SmartShift, which they’re calling Dynamic Boost. Like SmartShift, this is a way to balance the power and performance between the CPU and GPU in a system like a laptop that has a shared thermal solution. When you’re in a game and the CPU isn’t being utilized as heavily as the GPU, Dynamic Boost can reduce the power of the CPU and increase the power of the GPU to improve performance while keeping within the thermal constraints of the system. Nvidia says this can provide up to a 10% improvement. 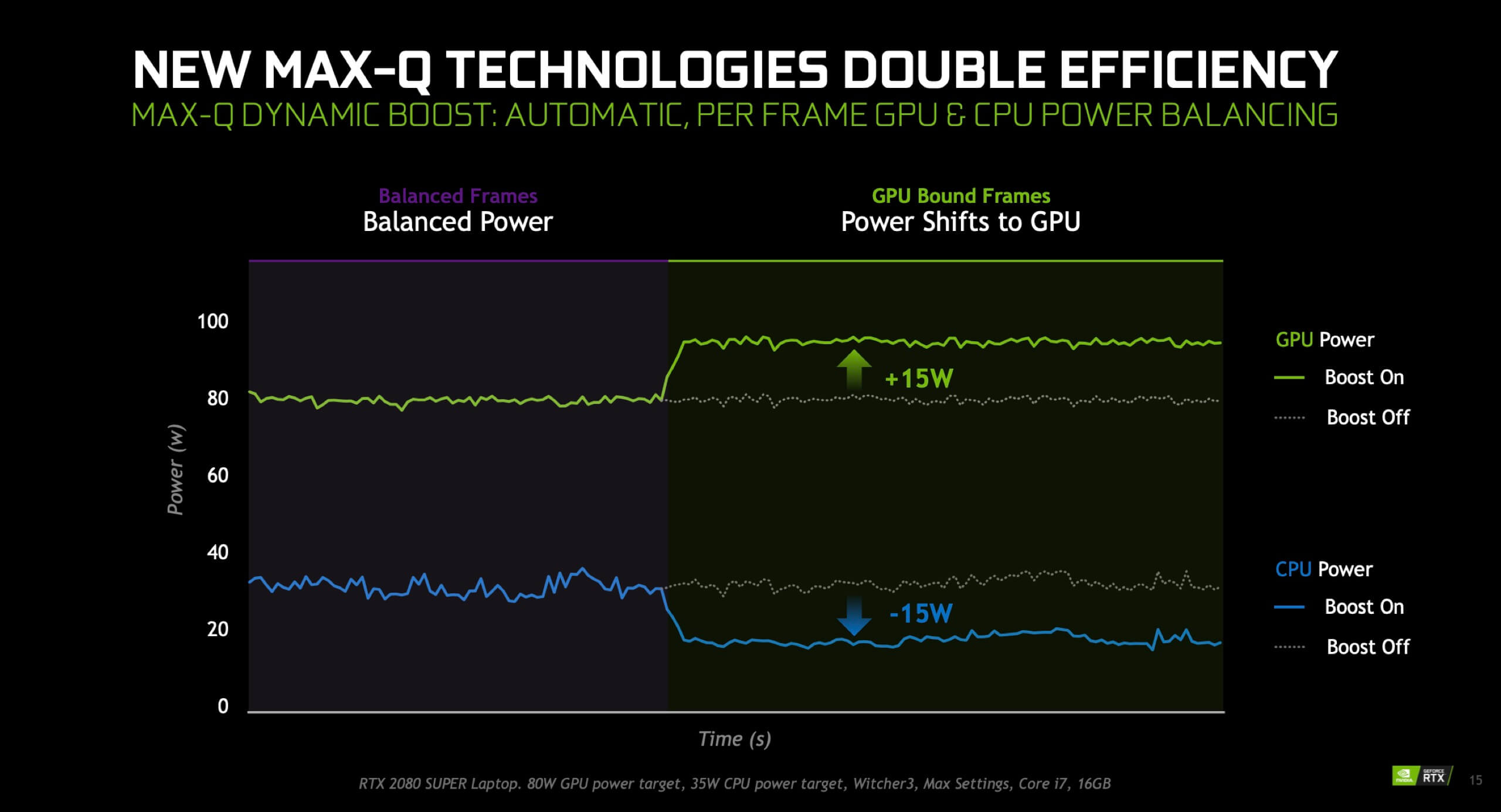 AMD has integrated this feature into their APU platform and it works across Ryzen and Radeon GPUs. Nvidia, of course, can’t just go and integrate Dynamic Boost into the CPU, which raises the question of how they are achieving this? The answer is with a hardware solution that gathers power information on the CPU, and feeds that back into software that adjusts power between the CPU and GPU as necessary. Nvidia told us that this solution works with both Intel and AMD CPUs, so you can expect the technology to be used with any Nvidia Max-Q laptop provided the OEM is interested.

This new feature is not a requirement for Max-Q, but rather an optional one. It’ll be controllable through the Nvidia Control Panel if you wish to disable it, and for now will only work with games, so there will be no Dynamic Boost controls available for creator or compute applications. It’s also hardware based, so it’s not something Nvidia can deliver via a software update to previous platforms.

The other great new addition, and this has been a long time coming, is finally the ability to have both Optimus and G-Sync capabilities in the same system with a dynamic switch between the two. A very small number of laptops have included this feature through a hardware switch, but with this new generation of Super laptops Nvidia will now be providing this display switch automatically through “Advanced Optimus,” with no reboots required.

The reason why this is needed is that for G-Sync support, the GPU needs to be connected directly to the display. But for Optimus to switch back to the iGPU for power saving measures, the display would also have to be connected to the iGPU. This conflict meant that most G-Sync laptops ditched Optimus entirely. Now with Nvidia’s dynamic display switch hardware, laptops will get the best of both worlds.

That’s all we have to share for the moment, until we can dive into the new components, test them and report back to you in the coming weeks.

Based on information we’ve gathered from OEMs, it sounds like most gaming laptops this generation will be sticking to an Intel 10th-gen CPU plus Nvidia Super combination, at least in the major line-ups. Laptops like the Asus ROG Strix series, MSI Thin, Gigabyte Aero, HP Omen, Razer Blade and more have all decided to use this combination for their latest generation.

Nvidia clearly remains the leader in mobile graphics. They have the efficiency crown and that’s what you need to win in laptops. But we’re also hoping to see more gaming machines opt for Ryzen Mobile, or at least offer it as an option as it looks to be a strong performer both in terms of performance and efficiency.

Part of this absence could have to do with development costs. Asus mentioned that switching over some of their high-end designs to Ryzen 4000 – the top-end Zephyrus models for example — would be a lot of work and they’re not willing to do that right now. We’ll have to see if any of that changes in the coming months.