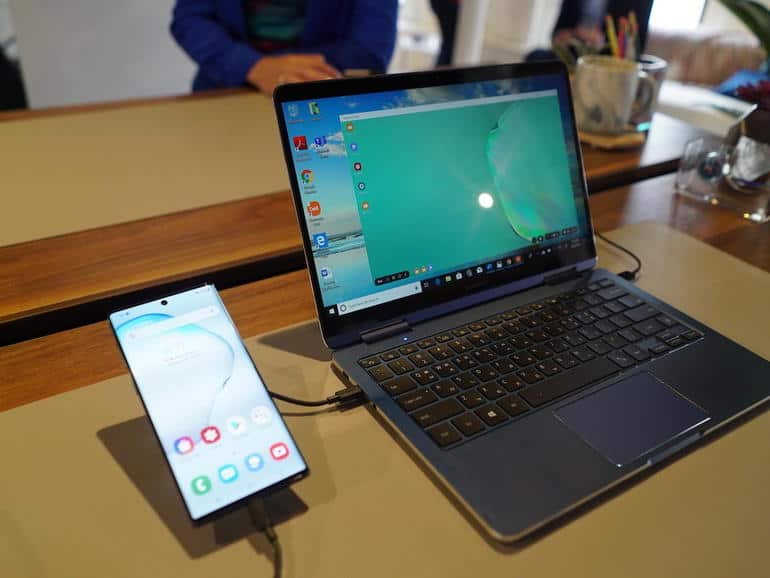 Almost three years ago, I wrote about the then-growing crowd of desktop environments embedded within smartphones. These environments kick in when you connect a smartphone to a larger monitor. Doing so with an iPhone allows you to simply mirror your display. But a Samsung phone equipped with the company’s DeX environment (Galaxy S-series and Note) offers the option of a  desktop experience that includes a taskbar and runs Android apps in resizable windows. Add a keyboard and mouse connected with Bluetooth or a USB-C hub and, voila!, you have a comfortable PC-like environment.

When these environments first appeared, they were focused on the scenario of someone bringing a phone into an office where they would connect to a desktop keyboard, monitor and mouse. Over the years, though, a number of startups have developed laptop dock shells that rely on these environments for their software and connectivity and can also operate as a second display to other devices. The idea was first tried over a decade ago with products such as the Redfly companion for Blackberry and Windows Phones and the never-released Palm Foleo. When Palm canceled that device, it held out hope for a Foleo II, but ZDNet editor-in-chief Larry Dignan commented, “I’d be surprised if the product was mentioned much again in the future.” He would not be.

One of the earliest of the modern breed, the Mirabook, launched on Indiegogo back in mid-2017 but just reached production at the end of last year. The company has told backers it is seeking to address a host of quality issues for up to 15% of units that include nonfunctional speakers and USB, dark or flickering displays, and stuck keys. What’s left? There was also the Sentio Superbook from a company that created its own desktop environment, but its last project update was in mid-2019 and the project’s comments include many complaints about non-receipt and disappointment from those who did receive it.

I recently spent some time with a more recent Kickstarter alum, the Nexdock 2, a dark gray shell that includes a 13-inch display, three USB-C ports. Two of these are designated for power and connecting to the smartphone that it also charges. There’s also a USB-A port and microSD slot. It works with the two main desktop modes now available: Samsung’s DeX and Huawei’s Easy Projection. Google has included a basic version of a desktop mode in Android 10 supported by LG and others but not by Google’s own Pixel phones. While Nexdock offers a version with a touchscreen, mine lacked one. There’s also no webcam, although there are mounts available that let you side-mount your phone to use as one if you’re willing to accept some off-center Zoom sessions.

The wedged Nexdock 2 has a passing resemblance to the MacBook Air, but the experience of using it diverges quickly from that polished product. While it has no fan, it is surprisingly heavy. The unit’s display suffers from bleeding backlight at its edges. It has an unevenly backlit keyboard that’s dimmer toward the middle, an anomaly I’ve never seen. The trackpad buttons don’t work well at the corners. These are preferable to the problems faced by some Mirabooks. And while a crowdfunded project from a small team may merit a bit of slack, this is not the team’s first foray.

Due up next from the crowdfunding crowd is the Anyware Phonebook, a 15-inch device that started at under $150 to backers. Like many small companies manufacturing in China, Anyware claims production has been derailed a bit by COVID-19 but still plans to start shipping next month and will stand by a seven-day, no-questions-asked return policy.

Pricing pressure creates much of the challenge in producing these devices. As their prices are raised, so are questions about their value versus a real laptop that is the same size and weight, Indeed, there’s no question that Samsung itself could produce a version that offered far superior design to these startups’ efforts; such a product would have appeal to IT managers in heavily controlled settings that want to take advantage of Knox and MDM tools. Instead, it has enabled DeX to work directly with Windows laptops, providing an alternate environment when you want to directly address resources on your phone. Meanwhile, Microsoft and other laptop makers are working mightily to strengthen bridges between the PC and the phone so that that’s not necessary.

In either case, the next year or two will provide a stronger incentive for PC-mobile phone interaction as 5G networks roll out around the globe. With little incentive for many public hotspots to upgrade their infrastructure and greater security concerns around public Wi-Fi, more people will be eager to tap into an available 5G connection, which they are far more likely to see in their phone before their laptop.

Samsung DeX wants to invade your laptop
The latest version of Samsung’s productivity platform ditches the docks for a direct-to-PC connection.

NexDock 2 hands-on: Work anywhere with your Samsung smartphone
Working anywhere and at any time is the focus of Samsung DeX on a Galaxy phone.

Choosing sides in the smartphone battle for the desktop
After Continuum and DeX, there’s a good chance that a full desktop environment will soon lurk inside your next smartphone.

0Shares
Previous Post$2 Trillion for Surveillance Capitalism – US Government Promises $1,200 to Every AmericanNext PostWhat was the first Altcoin?