iRobot has built a new intelligence platform, called iRobot Home Genius Intelligence, that aims to change the way customers interact with their networked robots and may become the integration point for the smart home.

The COVID-19 pandemic has accelerated a shift for iRobot, said CEO Colin Angle. Although Angle, CEO of iRobot since 1997, has pursued programming that resulted in autonomous robots, he acknowledges that humans want more interaction with the iRobot portfolio as well as control. Think of the Genius 1.0 platform as a second installment of a larger strategy that rolled out with new robots last year.

The Genius Home Intelligence platform connects Roomba and Braava jet for coordination, experiences, and preferences by home and schedule via the iRobot Home app.

“Over the last 12 months, people became impatient that the robot couldn’t do more. The message we got is that customers wanted more control over what the robot does,” explained Angle. “They want iRobot to clean the way you want them to. It makes sense. It was as if you have someone to come to the house and clean but couldn’t talk to them.”

Enter the new iRobot App, available Aug. 25, give cleaning robots i7 and higher intelligence to know what zones in a home to avoid, recommend seasonal cleaning changes as well as schedules and tie into event-based automation. You’ll also be able to tell iRobot to clean under the kitchen table at a certain time.

The company is also planning a quick cadence update schedule with new features every three months. “We have six months of backlog of new features. This is not an idle one and done. We’re building an operating system,” said Angle.

iRobot will also roll out more smart home integrations so your cleaning robot will know that it should vacuum and mop when the garage door opens and your car leaves.

“We were focused on the idea that autonomous was the same as intelligence,” said Angle. “We were told that wasn’t intelligent and customers wanted collaboration.”

The COVID-19 pandemic pushed the collaboration theme with customers and robots because there was no choice. People are home more than ever so more cleaning coordination is needed. Meanwhile, iRobot found customers were home more yet had less time to clean. More time at home also meant more messes.

For the second quarter, iRobot delivered revenue of $279.9 million, up 8% from a year ago. First-half revenue for 2020 was $472.4 million. iRobot reported second quarter earnings of $2.07 a share. Julie Zeiler, CFO of iRobot, said that Roomba was 90% of the product mix in the second quarter and the company’s e-commerce business performed well.

“We’ve seen our business build steady momentum over the past 3 months. As a result, we move forward with improved confidence that our second half 2020 revenue will grow meaningfully over first-half levels,” said Zeiler. “With that said, we remain cautious given the relatively fragile state of the global macroeconomic environment.” 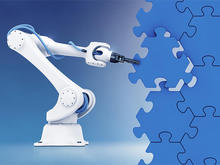 Robotics in the enterprise

Robots have moved off the assembly line and into warehouses, offices, hospitals, retail shops, and even our homes. ZDNet explores how the explosive growth in robotics is affecting specific industries, like healthcare and logistics, and the enterprise more broadly on issues like hiring and workplace safety.

iRobot, the AI and data company

Fortunately, for iRobot and Angle, the pivot to more robot collaboration wasn’t inconceivable. Angle said that iRobot has the second-largest AI codebase after Tesla.

Customers were already showing that they wanted more from the iRobot platform during the COVID-19 pandemic. iRobot saw a big surge toward its premium robots. Six months into 2020, iRobot’s premium robots were 60% of sales, up from 20% just a few years ago. “The idea people wanted more control of robots played out in our results and surveys.”

The data also highlighted how iRobot customers wanted more control. “The No. 1 metric we track internally is mission completely. The No. 1 reason a mission doesn’t complete is that a user canceled a mission,” explained Angle. “That means iRobot went and annoyed somebody and the shut it off.”

To build a partnership, iRobot launched a home intelligence system that linked all connected robots and could make personalized suggestions with more control over cleaning via the app.

As a result of previous home mapping data, iRobot can be told to go clean around the table. Integrations with Amazon Alexa and Google Assistant enable more natural dialogue with iRobot. Instead of a five- to six-step cleaning process, Amazon Alexa will be able to schedule a cleaning via voice through Alexa Conversations.

The future will mean that iRobot will be able to use its computer vision and object recognition and remember tables, chairs, and zones and know what to do. The home mapping data is stored locally, noted Angle.

With iRobot devices essentially using the same processors as smartphones, the company can “continue to drive compute and onboard power on robot for quite some time.” There’s a possibility that iRobot could put more processing power in docking stations, but “it’s going to be a while before that’s a necessity,” said Angle.

Ultimately, iRobot integration with other smart devices could grow the intelligence platform into something more. Today, smart home vendors are looking to lock customers into one stack. There are few independent players that can link various companies and provide a data-driven home. “Seventy percent of Roomba owners have on average three other smart devices,” said Angle.

First, iRobot will provide various cleaning routines with its robot, but it’s not hard to envision the company being the conductor for multiple home routines. iRobot Genius and IFTTT Connect will power the automation behind orchestrating smart home devices.

The revamp of the iRobot app includes four core features with more enhancements on deck on a three-month cadence.

iRobot has architected its platform so visual object recognition is done on the robot and no image ever leaves local storage, said Angle. As a result, iRobot devices can recognize a table, but not store the image.

Over time, iRobot’s app as well as its platform aims to be the Switzerland of the smart home. “iRobot is Switzerland,” said Angle. “We work with everyone and are a natural integrator. Home understanding is the center of building intelligence. This is all about the consumer and having a home that maintains itself.”