Following leaks is often a game of cat and mouse – what is actually legitimate and what might not be. Traditionally AnandTech shies away from leaks for that very reason, and we prefer to have multiple sources that are saying the same thing, rather than addressing every potential rumor on the blogosphere. Nonetheless, hints towards a new product from Intel, Alder Lake, have been cropping up over the past few months, including getting a small mention in Intel’s Q2 2020 earnings. The leaks have suggested that it would offer a mixed Hybrid x86 environment similar to Intel’s current Lakefield product that uses high-performance cores paired with high-efficiency cores. As part of Intel’s Architecture Day 2020, the company officially announced Alder Lake as a hybrid x86 product on its roadmaps. 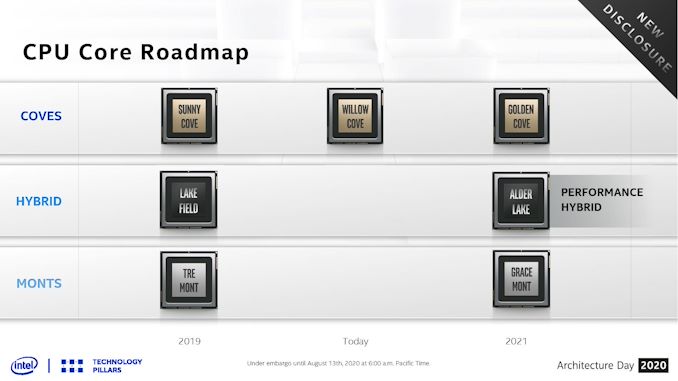 In the roadmap and as part of the discussions, Intel’s Raja Koduri confirms that Alder Lake will be a combination of the Golden Cove high performance computing core and the Gracemont high efficiency core, and the goal of this chip is to offer a ‘Performance Hybrid’ option into the portfolio. Raja explained to the audience that the company has learned a lot due to building Lakefield, its current hybrid x86 chip for thin and light notebooks, and while Lakefield was focused on battery life, Alder Lake will focus instead on performance.

Alder Lake will involve Intel’s next generation hardware scheduler, which we are told will be able to leverage all cores for performance and make it seamless to any software package. Intel claims that Alder Lake will be Intel’s best (ever? 2021?) performance-per-watt processor.

If leaks are to be believed, then Alder Lake looks set to offer an 8+8 design, although that has not been confirmed. Intel did not go into detail if Alder Lake will involve any next generation packaging, such as Foveros (which Lakefield does) – but in the Q2 2020 financial disclosures, it was said to be positioned for mobile and desktops. We expect Intel to discuss Golden Cove and Gracemont at some point next year, and then Alder Lake as an extension to those – we have already seen Intel documents regarding new instructions for each of these cores. My prediction is to come back this time next year, where we should have more to talk about.