It was recently announced that the Fugaku supercomputer, located at Riken in Japan, has scored the #1 position on the TOP500 supercomputer list, as well as #1 positions in a number of key supercomputer benchmarks. At the heart of Fugaku isn’t any standard x86 processor, but one based on Arm – specifically, the A64FX 48+4-core processor, which uses Arm’s Scalable Vector Extensions (SVE) to enable high-throughput FP64 compute. At 435 PetaFLOPs and 7.3 million cores, Fugaku beat the former #1 system by 2.8x in performance. Currently Fugaku has been used for COVID-19 related research, such as modelling tracking rates or virus in liquid droplet dispersion. 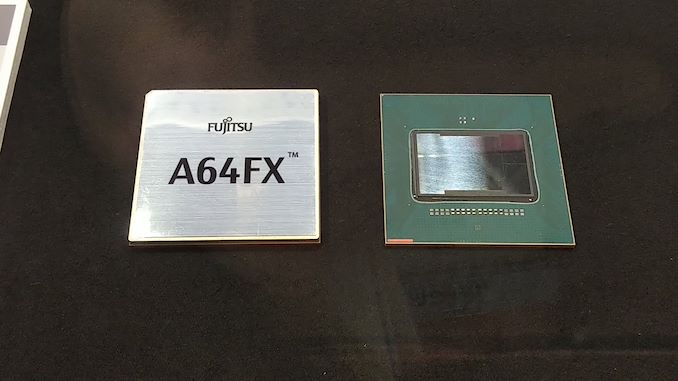 The Fujitsu A64FX card is a unique piece of kit, offering 48 compute cores and 4 control cores, each with monumental bandwidth to keep the 512-bit wide SVE units fed. The chip runs at 2.2 GHz, and can operate in FP64, FP32, FP16 and INT8 modes for a variety of AI applications. There is 1 TB/sec of bandwidth from the 32 GB of HBM2 on each card, and because there are four control cores per chip, it runs by itself without any external host/device situation. 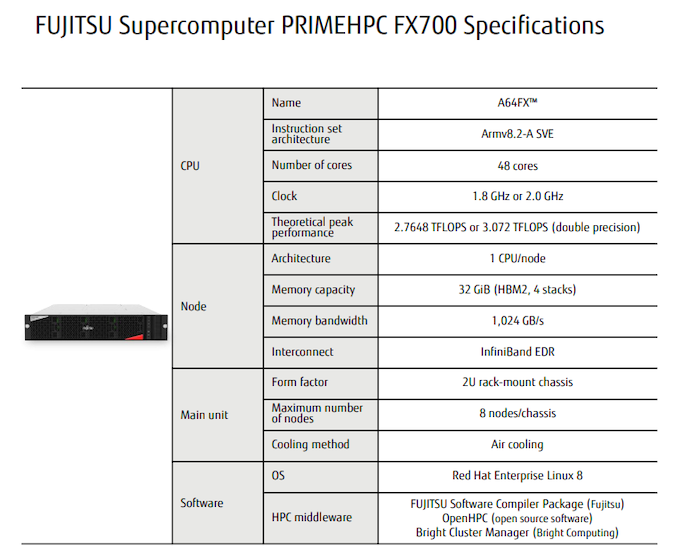 It wasn’t ever clear if the A64FX module would be available on a wider scale beyond supercomputer sales, however today confirms that it is, with the Japanese based HPC Systems set to offer a Fujitsu PrimeHPC FX700 server that contains up to eight A64FX nodes (at 1.8 GHz) within a 2U form factor. Each note is paired with 512 GB of SSD storage and gigabit Ethernet capabilities, with room for expansion (Infiniband EDR etc). The current deal at HPC Systems is for a 2-node implementation, at a price of ¥4,155,330 (~$39000 USD), with the deal running to the end of the year. 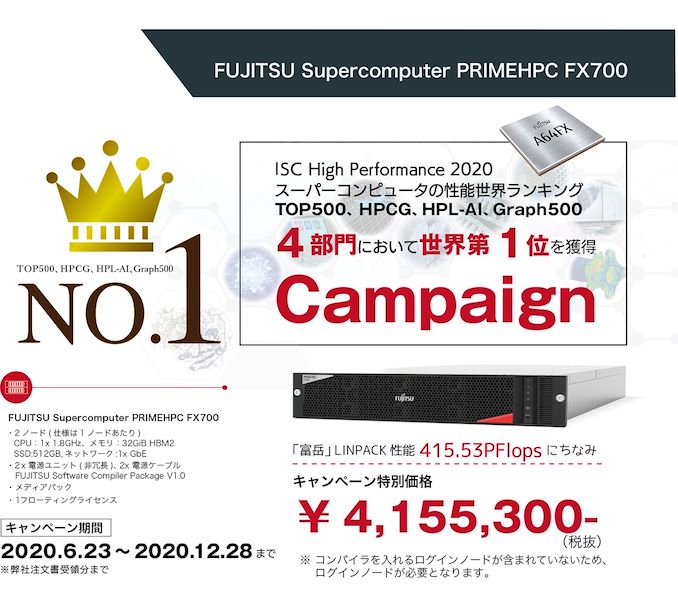 The A64FX card already has listed support for quantum chemical calculation software Gaussian16, molecular dynamics software AMBER, non-linear structure analysis software LS-DYNA. Other commercial packages in the structure and fluid analysis fields will be coming on board in due course. There is also Fujitsu’s Software Compiler Package v1.0 to enable developers to build their own software.