While Intel’s integrated GPUs have made immense strides over the past decade, there’s been one particular legacy they’ve been unable to break free from: OEM driver locking. Due to the large degree of customization and optimization that OEMs sometimes do to their systems, some OEMs have insisted on having video drivers “locked” to their platforms, so that only video drivers that they’ve customized and distributed can be installed.

This structure has always offered at least a modicum of utility, ensuring that newer drivers don’t break things or otherwise interfere with those system customizations. But as desktops and laptops live longer than ever, OEM have demonstrated a shorter attention span than Intel when it comes to driver updates. As a result, unfortunate system owners have found themselves stuck in a bind with older (and even some newer) systems, where there are newer drivers with important bug fixes for games and applications, but those drivers can’t be installed because they haven’t been customized and approved by the OEM.

Thankfully, it looks like the days of Intel OEM driver locking are finally behind us. Yesterday evening Intel released a new version of its Windows 10 GPU driver, version 26.20.100.8141, that’s fully unlocked, allowing it to be installed on virtually all OEM systems for the first time. And while there are a handful of catches, ultimately this driver should work with most OEM systems that are running a current, supported version of Windows 10 on top of an Intel Gen9 or later iGPU.

Going by Intel’s release notes, the key development here, besides seemingly throwing caution into the wind and telling OEMs to step back, is the now widespread use of Microsoft’s newer Declarative Componentized Hardware (DCH) video driver format. First introduced along Windows 10 1803 almost two years ago, DCH is a newer, modularized driver format that among other things, allows for more piecemeal distribution of the components within a driver. For Intel and NVIDIA users, for example, their respective graphics control panels are distributed and installed via the Windows Store when installing a DCH driver. 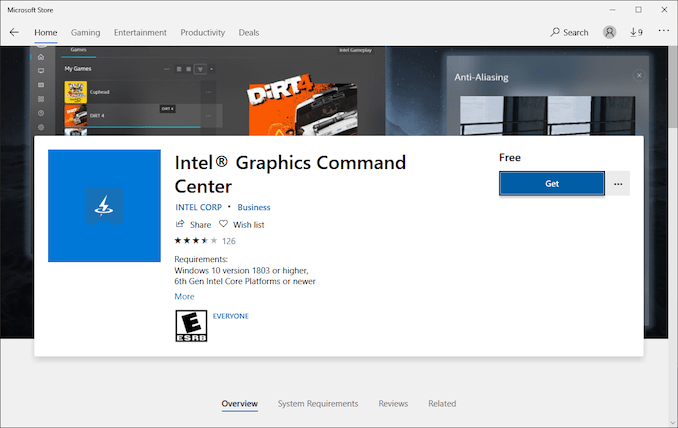 Critically, OEM-specific customizations are modularized under DCH as well, meaning that those customizations are no longer part of the base driver package, in Microsoft parlance. This means that it’s possible to distribute and update the base driver as a generic package, doing away with the need to make OEM-specific builds that incorporate their customizations. Ultimately, unlocked drivers have been part of Microsoft’s big plan for drivers since Windows 10 1803 shipped, and this week Intel is finally putting that plan further into motion with the release of their first unlocked driver set.

Meanwhile, although Intel is distributing unlocked drivers, they are being cautious about it, at least initially. At the very top of the driver description, before anything else, is the following warning text.

WARNING: Installing this Intel generic graphics driver will overwrite your Computer Manufacturer (OEM) customized driver. OEM drivers are handpicked, customized, and validated to resolve platform-specific issues, enable features and enhancements, and improve system stability. The generic driver’s intention is to temporarily test new features, game enhancements, or check if an issue is resolved. Once testing is complete Intel advises reinstalling the OEM driver until they validate it and release their own version.

For now, at least, Intel is calling these unlocked drivers test drivers. But so long as they work correctly, there’s going to be little need to go back to using pre-baked OEM drivers. Intel moves faster than the OEMs, and typically the company updates its generic drivers for far longer than OEMs update their custom drivers. So it should be a win for all parties: Intel improves the user experience by getting drivers to users sooner, users get bug fixes and updates sooner, and OEMs have to less ongoing maintenance and driver customization work. Which is all the more important for all parties as Intel’s integrated GPUs have continued to improve with recent releases like the Ice Lake Iris Plus (G7) iGPUs, as well as the upcoming Xe-based iGPU that will be in Tiger Lake.

Finally, with all of that said, it should be noted that there is a catch: because this unlocked driver functionality is based around the Windows 10 DCH driver model, it means that a system needs to already have an OEM DCH driver installed – a so-called “OEM DCH to Intel Generic DCH” driver upgrade. So for an older system that is running a current build of Windows 10 but is relying on a standalone-style driver, it will not be possible to install the unlocked Intel driver. In this case a user would first need to install an OEM DCH driver, if one is available. Otherwise, Intel’s new driver package doesn’t do anything for systems running pre-DCH drivers.

You can find the full details on Intel’s new iGPU driver, as well as the associated release notes, over on Intel’s driver download page.