As an emerging NFT trading marketplace favored by capital, Element was designed from three perspectives, including creators, users and community, in order to help a large number of users enter NFTs market and promote the integration between traditional market and crypto economy. Element has also received significant upgrades in response to changes in the crypto market.

Currently, the problems faced by on-chain game players and NFT users are the uneven quality of game projects, the inability to synchronize primary selling with secondary market, and the inability to participate in early project investment, etc.

However, GameFi Launchpad is the highlight of the Element BSC marketplace, which helps GameFi on-chain games solve the above problems. The feature helps projects to launch NFT mystery boxes and helps quality projects to develop better and faster. Projects that go live on GameFi Launchpad can receive support from Element’s promotion. 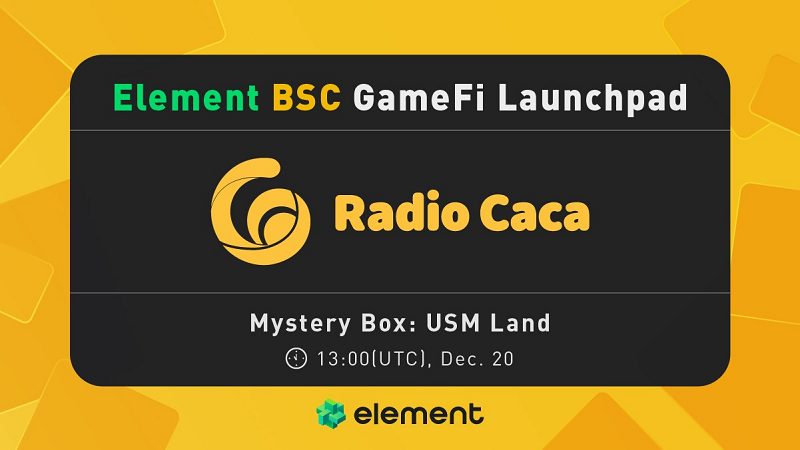 In order to bring more investment-worthy chain game projects with long-term stable income on GameFi Launchpad, Element’s Chain Game Lab launched the GameFi Guild DAO (GGD), which is composed of game enthusiasts, game players and members of guilds around the world, with harboring rights of priority submission, review, vote and investment. It is the first stop for Element to realize community DAO governance.

Radio Caca is the exclusive manager of the Maye Musk Mystery Box (MPB). RACA is the governance token of the USM Metaverse. In just over a month since launch, RadioCaca NFT marketplace has surpassed 24 billion RACA (approximately $140 million) in daily trading volume. It is currently planning the USM Metaverse, including land, staking, farming, etc..

With a sound economic model providing a high-quality P2E experience for users and players, it was even named as a BSC MVB Top1 GameFi Metaverse project. In terms of gameplay, economic model, community and on-chain performance, RadioCaca fully meets the GameFi Launchpad selection criteria, and Element is pleased to announce that RadioCaca will be the first GameFi Launchpad mystery box project on the exclusive Element BSC platform.

To recap Element’s development, on May 7, 2021, Element announced a total of $11.5 million angel funding round, valued at $50 million, led by SIG and Dragonfly Capital, with participation from institutional investors including Dragon Roark, INCE Capital, etc.

Element launched its Beta version on August 2, 2021, and with the concept of “NFT for all”, tremendously users started mint NFT for the first time at Element. In August, Element stormed into third place in the world in the Dapp list, with 890% more transactions, 500% more active users and $214,000 in transactions, reaching the first Element development milestone.

In just six months of development, Element has aggregated 64 million+ NFTs based on Ethereum, Polygon and BSC chains, and is now the world’s largest multi-chain trading platform aggregating NFT assets.

Element is a decentralized NFT marketplace based on Ethereum, Polygon, and BSC, that helps you create, discover, and exchange. Element provides a value trading platform for both NFT creators and investors.