Bats are a known harbor to a large variety of viruses. Humans rarely interact with bats directly (they are not a common delicacy or pet in China), but other wild animals, such as civets and pangolins, do. Seventeen years before the outbreak of COVID-19, a coronavirus already made the jump to humans, likely starting with a farmer in Guangdong province in Southern China.

In the case of SARS, it remained locally contained until a fishmonger from the Guangdong region was checked into a hospital in the province’s capital of Guangzhou on January 31, 2003. There, he infected 30 nurses and doctors.

Ten days later, China notified the WHO, but another ten days later, one of the infected doctors traveled to Hong Kong to attend a wedding ceremony. Within a day of his arrival, he felt sick and checked himself into a local hospital, where he died two weeks later.

Shortly after, other hotel guests checked themselves into hospitals in Vietnam, Canada and Singapore. Throughout March and April, SARS spread quickly in Hong Kong, infecting 1,700 people (80 percent of whom were infected directly or indirectly through the Guangzhou doctor), killing 300.

By May, Hong Kong’s number of newly infected cases dropped to the single digits, and by June the area was declared free of any infections. While some researchers infected themselves months later while handling the virus, the outbreak was declared contained in July 2003.

The SARS outbreak shaped Hong Kong forever. The two-week school closures remain vivid in the memory of all students; street markets were dramatically altered in its aftermath; bathrooms were remodelled and plumbing remade (over 300 people were infected in a single block of an apartment building as the virus spread through the pipes). Temperature scanners were installed at border crossings and fever clinics were set up, usually via a separate entrance to a hospital. Many employers, especially those servicing large numbers of customers, made masks available to employees.

When Wuhan doctor Li Wenliang posted in a WeChat group for doctors on December 30, 2019, about SARS having returned, people in Hong Kong opened their ears wide and local media began reporting on it. When the Chinese CDC and the WHO declared in mid-January that there is no evidence this new virus could be transmitted from human to human, Hong Kong did not believe them. The local authorities confirmed their first case by January 23, 2020. On the same day, Wuhan was put under complete lockdown and the over 7 million people of Hong Kong knew the drill. They stocked up on masks, soap and hand sanitizer, cancelled their travel plans or returned from their trips to China. Blockchain meetups began to cancel their gatherings and venues closed their doors to talks and seminars.

Remembering the cover up by Chinese authorities around SARS in early 2003, residents  assumed the worst. They were convinced the virus was already among them and every returnee from China was a potential carrier. With its unusually long incubation time and the possibilities of asymptomatic carriers, the “Wuhan Pneumonia,” as it was then referred to in Chinese and Hong Kongese media, was taken seriously.

Having only recently unionized themselves in response to the 2019 Hong Kong protests, concerned doctors and hospital staff began to strike for border closures. While the government initially rebuked such demands as “discriminatory,” the pressure from losing 40 percent of their medical staff during an emergency became too high; major land and sea crossings were closed and all those arriving had to put themselves into 14-day mandatory quarantine.

Even without any official orders and while authorities at the WHO and China CDC were still playing down the threat, local restaurants and streets became deserted and events were cancelled. The feared epidemic, however, did not materialize. One month after the first case was reported, and as the first cases were officially recovered, only 73 cases were known, most of which had been imported from China.

As the disease began to spread in Europe, Hong Kongers let their guard down. They reappeared in malls and restaurants, congregated under the unusually clear skies in Hong Kong’s country parks and returned to their desks. Europe seemed far away.

Another month later, by March 25, the number of total cases had increased to 350; over 60 percent of cases were recorded just in the past ten days. Throughout March, Hong Kong authorities began to significantly restrict International travel. First, only arrivals from Italy, Korea and Hokkaido were instructed to be quarantined, then arrivals from parts of France and Germany, then the entire Schengen area, then U.S., Ireland and the U.K., finally the entire world.

As of now, non-residents are not allowed to enter or even transfer through Hong Kong airport. All ferry and cruise ship terminals have been shut. Those arriving from northern Italy are put into a supervised quarantine complex run by the government at a cost of about $25 per day, including board. They are not allowed to leave their room or receive visitors for 14 days.

Everyone else has to put themselves under quarantine at home or in a hotel. Other members of their household are advised not to leave their unit either. Those under quarantine have to wear a simple PVC armband, like the kind you receive at a festival or club. It is sealed and has a printed QR code.

The QR code contains a simple case number. It can be scanned using an app available on the Google Play and Apple App stores and connected to a phone number. It scans nearby Wi-Fi signals and uses their relative strength to determine if an individual has left their home. The “Stay Home Safe” app has been criticized for not working properly and is likely not very functional.

Most of the quarantined travellers are returning students and those who have been on short-term employment in Europe. Unlike in neighboring Taiwan, where those under a quarantine order are strictly surveilled and receive regular visits from the authorities. Hong Kong’s police are unable to follow up with everyone under quarantine. Instead, they are asking the public for help. Telegram channels exist where people can dox anyone violating their quarantine orders. A recently announced version of the wristband will connect to its holder’s smartphone via Bluetooth. If the connection is cut (for example, because the phone is left at home while the holder ventures out) the authorities are alerted.

Hong Kongers take SARS-CoV-2 seriously, and unlike authorities in Europe and America, the Hong Kong administration will work hard to completely eradicate the disease from the city, as it did during the SARS outbreak in 2003. They believe society cannot “coexist” with shutdowns for too long, and allowing COVID-19 to spread through society threatens modern civilization.

So far, chances seem good that the virus can be eradicated in the city without bringing the economy to a dangerous halt, with frequent temperature checks, voluntary self confinement at home, zero tolerance for leaving home while feeling unwell and facemasks for everyone. Other neighboring countries, such as Korea, Japan, Taiwan and Singapore seem to be on a similar trajectory.

More worrying for now remains the medium-term future. Will travel to Europe and the United States resume this year? With outbreaks so massive, lack of testing and no political will to entirely contain this, it seems unlikely Hong Kong authorities will want to risk a third or fourth wave of imported cases.

It’s entirely conceivable we will see an “Asia Free Health Zone,” a loose union of places that are COVID free, and have policies in places to keep it that way. Tourists and business travelers are able to freely move between these areas, while everyone outside is required to quarantine for 14 days. With testing becoming more reliable and available, maybe this period can be shortened to just five days, in which no daily test is allowed to return positive.

The disruptions of daily life have already far exceeded those of the traumatic SARS outbreak 17 years ago. School closures are scheduled to be six times longer and might be extended beyond that. Even when Hong Kong was hardest hit by SARS, flights remained scheduled.

Cryptocurrency conferences such as Blockchain Week, Token2047 and SPOT are cancelled throughout July, and there is significant uncertainty around whether they can be held in the fall or even in 2021. Hong Kong lives off its massive financial services, accounting and logistics industries. It relies on food and pharmaceutical imports and has close to no domestic industry of its own.

It has a highly skilled and young workforce, but political considerations have made it difficult in the past to reinvent the economy on a more sustainable path. While “virtual commodities” like bitcoin and ether remain unregulated and freely convertible, the cryptocurrency industry is straight-up unwelcome among the multinational banks and local regulators.

Being highly internationally connected, Hong Kong’s fate depends on the economies around it. The efforts to contain COVID-19 cannot be locally isolated but have to be internationally coordinated. Authorities have to produce reliable data and look beyond their own population when implementing policies. Given the rise of isolationist nationalism and tense cross-Pacific relations, all of this seems more difficult than ever.

This is an op ed contribution by Leo Weese. Opinions expressed are his own and do not necessarily reflect those of Bitcoin Magazine or BTC Inc. 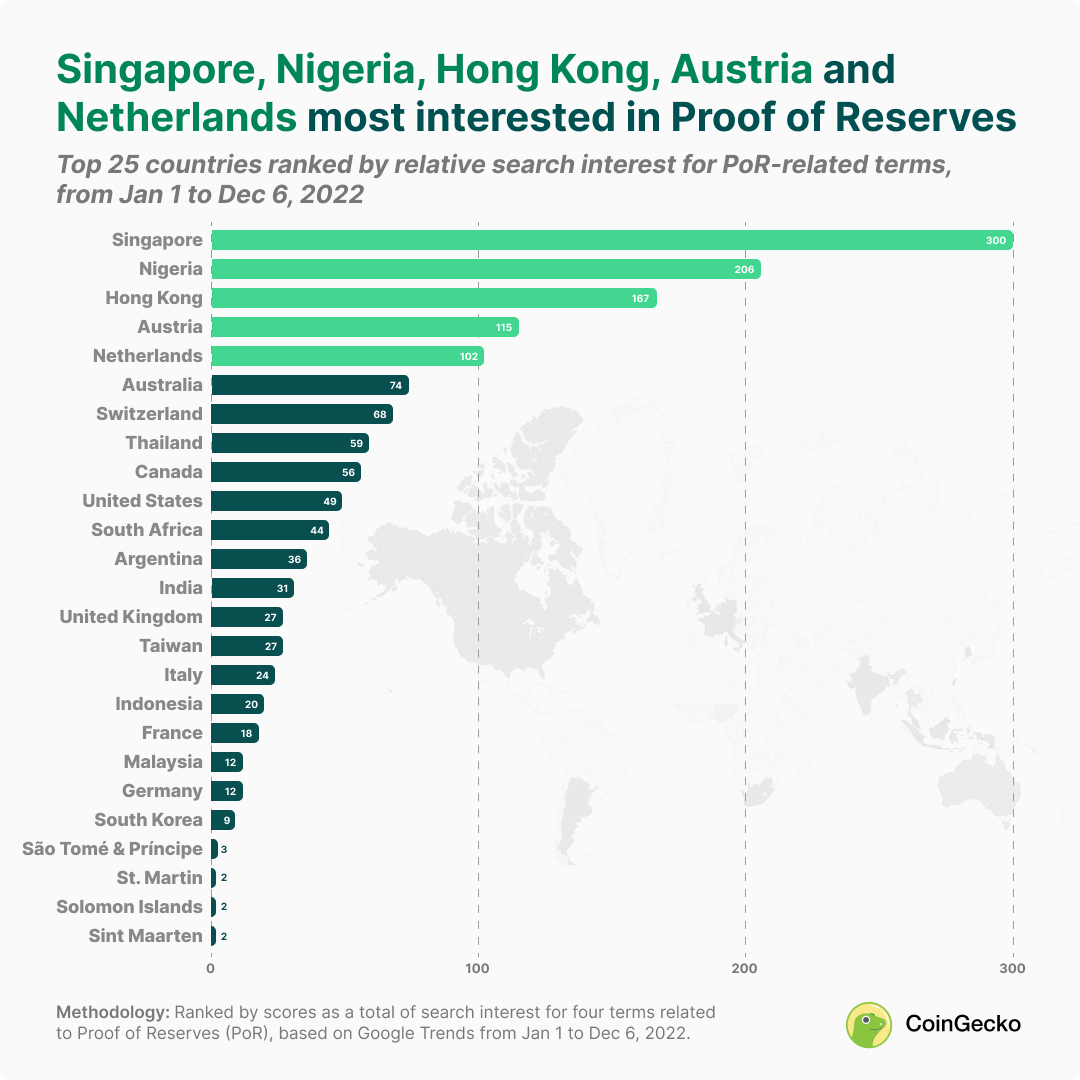 Interest in Proof of Reserves is Strongest in these Countries- CoinGecko