DRIVEZ, a Move-To-Earn 2.0 project, launches a revolutionary application to turn daily commuting to profit and join hands to save the world. This third quarter will mark a blooming of DRIVEZ with numerous essential events such as INO, IDO, and listing.

Ho Chi Minh City, July 13, 2022 (GLOBE NEWSWIRE) — Move To Earn projects are growing fast and dominate the crypto industry. Users can earn money through jogging, walking, and running. However, doing exercise every day is not an easy task for everyone. But let’s imagine that every day, billions of vehicles run worldwide. Moving is needed to help the world grow and is a daily activity for most people which has been done for many purposes and reasons: works, classes, traveling to enjoy life.

Along with that, it costs money, wastes the time, and even causes air pollution. A solution is highly needed to make daily boring commuting profitable and help prevent the greenhouse effect. That is why the DRIVEZ app was born and rocketed into the crypto industry among many other Move-To-Earn projects! 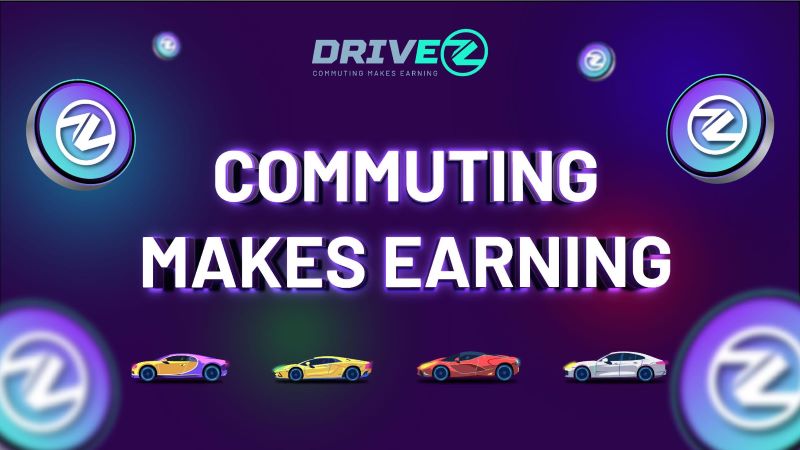 Overview of the project, what is DRIVEZ?

DRIVEZ is a Web 3.0 lifestyle application and the first NFT DAO mixed up with GameFi and CommunityFi. DRIVEZ brings in a new feature of moving: Drive-To-Earn, which allows everyone to earn cryptos through their daily commuting in the easiest way. Users can own or rent their favorite NFT car to move outdoors with transportation to make profits with $DRIV (governance token) and INCO (In-App token) tokens.

With a clear vision and mission, the developers promise to make DRIVEZ the world-leading project of Drive To Earn, making the impossible possible. The project will attract many users worldwide because it not only generates profits for tedious daily commuting, creating enjoyable driving moments but also inspires the community with the value:  Environmental protection. DRIVEZ commits to use a part of the profits to donate to the charity organization to prevent the greenhouse effect and air pollution and to plant trees worldwide.

The DRIVEZ application designed its breakthrough Drive-To-Earn feature to help everyone turn their daily commuting to profit most easily. So that users who own transport vehicles such as motorbikes and cars like taxi drivers, Grab, Uber, Didi, Ola, or even use public transportation can participate in commuting activities to receive rewards. It will attract many investors and users because of its profits.

Users who use NFT vehicles earn $DRIV, $INCO, and pick up other NFTs up to their luck on the road. Each NFT car has different metrics and ways of earning based on actual car behavior, designed based on the advice of experts in the automobile industry. The items earned can be used for in-game activities or cash out for profit. Users can trade their NFT Vehicles, Parts, Boosters, Mirrors, and Lands on the in-app Marketplace, and the revenue is saved in the in-app wallets that feature the integrated-dApp function.

In addition to the Drive-To-Earn mechanism, DRIVEZ gives users the rights and profit to create new NFTs via a unique mechanism called Mirroring, a revolution of minting and breeding. To mint a new NFT car, users need a mirror and an NFT car at any rarity. Every day there are eight mirroring seasons. Users who want to mirror a new vehicle must join the mirroring season before it starts. No matter how many users enter each season, limited numbers of NFT cars will be minted, and it takes seven days to receive the new vehicle. The speed of minting a new NFT is well controlled, keeping the NFT value increasing.

To optimize the profits for users, DRIVEZ will implement a Staking product so that users can stake $DRIV, $INCO tokens, and NFT Vehicles to earn passive profits. Staking is essential to maintaining a safe and healthy network. The longer one saves, the higher the ROI.

Besides, the deflationary token & NFT economy is another unique feature of DRIVEZ. Unlike other projects, the DRIVEZ team only issues 50,000 limited NFTs for the whole life cycle of the project among 30,000 items that would be public sales and 20,000 of which would be special NFTs for co-producing with artists & automobile manufacturers, and leading transportation corporations. Along with that, Auto-Balance & Anti-Inflation Control System (AACS) and On-Demand Reward Distribution System will control the reward distribution process to reduce the inflation of Tokens $DRIV & $INCO and NFTs (via NFT DAO).

How to make Money with DRIVEZ by daily commuting?

Users must download the DRIVEZ app on AppStore or Google Play. Users will need NFT cars to start earning. They can buy an NFT car at Drivez’s in-app Marketplace or obtain NFT cars by purchasing the DRIVEZ Mystery CarBox. If users don’t have much budget, they can choose to rent NFT cars from other users. NFT cars have 24 models in 6 segments with different metrics and five rarity levels that affect earnings performance. With GPS and the internet, the earnings start to be kicked off when vehicles reach 20 km/h for the first time of the trip and run the minimum distance. To track users’ workout activity, the developers have developed the in-app tracker where the user has to start and end the activity manually. 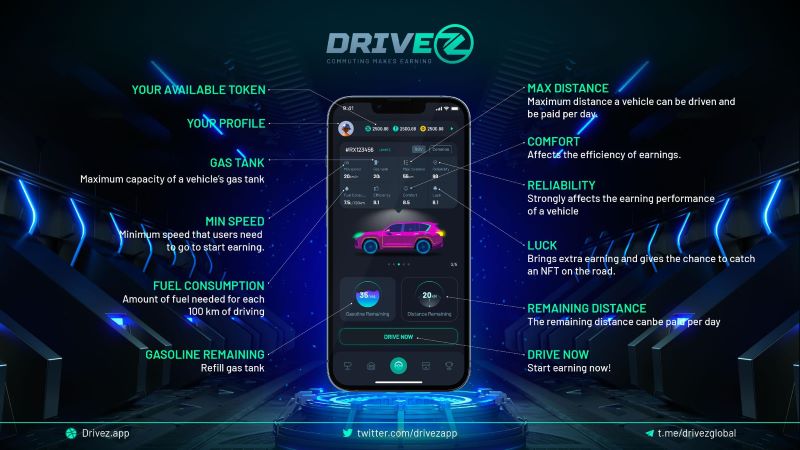 It has seen its notable breakthrough in early July. Specifically, DRIVEZ’s public testnet reached over 68,000 users and made over 4,000,000 km together in just 20 days. This event is one of the most recent incredible testnet rocked the market and spread in the blockchain industry since over 50 venture capitals, crypto communities, and well-known KOLs shared this event on their social media. The testnet takes place from June 18th until July 31st, 2022. Testers have early access to the DRIVEZ app with full features, receive two test NFT cars and use them to start earning the test token $tDRIV and have a chance to convert into $DRIV at the mainnet launch.

DRIVEZ focuses on perfecting the application designs and features to deliver a beautiful and engaging Drive-To-Earn. The upcoming milestone is that DRIVEZ will conduct the mystery box sale from 13 to July 21st, 2022, on their website https://ino.drivez.app/. It sets an essential stage for launching the mainnet version this August. In this event, only 10,000 mystery boxes will be sold to the public at the same price of $500/ box. Besides the NFT car, buyers can receive lucky tickets: Bronze, Silver, and Golden tickets that contain either NFT parts or NFT mirrors or 1 – 10,000 $DRIV depending on their luck.

In addition, DRIVEZ has a solid plan to run IDO on July 25th (tentatively)  on BSC Station, BSClaunch, Gamestarter, NFTb, Gagarin, Enjinstarter, FAM Central, Babylons, Trustfi, Marspad, and AntPad. The fundraised will be spent on building up and upgrading innovative application features and expanding the markets.

The team is working with the word-leading exchanges such as Houbi, Bybit, MEXC, and Gate.io for the upcoming listing on August. Drivez will update the result shortly in their channels.

“The emerging Move–to–earn model coupled with NFT gaming and CommunityFi is the future. Its values are immeasurable, especially since NFTs assets play a primordial role in the game and generate extremely high benefits when trading in the Marketplace. We are still at the beginning of the move-to-earn revolution. It sets the time for DRIVEZ to conquer the promising markets, with the ambition to become one of the world-leading Drive-To–Earn that delivers seamless in-app experiences and makes daily boring commuting profitable and enjoyable with the value: Environmental protection. The capital received is the leverage for us to enhance the app user experiences and scale the markets.”

0Shares
Move-to-earn
Previous PostThe Fall of Bitcoin: What Knowledge Do You Need to Have in Order to Predict Profits?Next PostU.K. Robo is a Newly Launched Crypto Platform