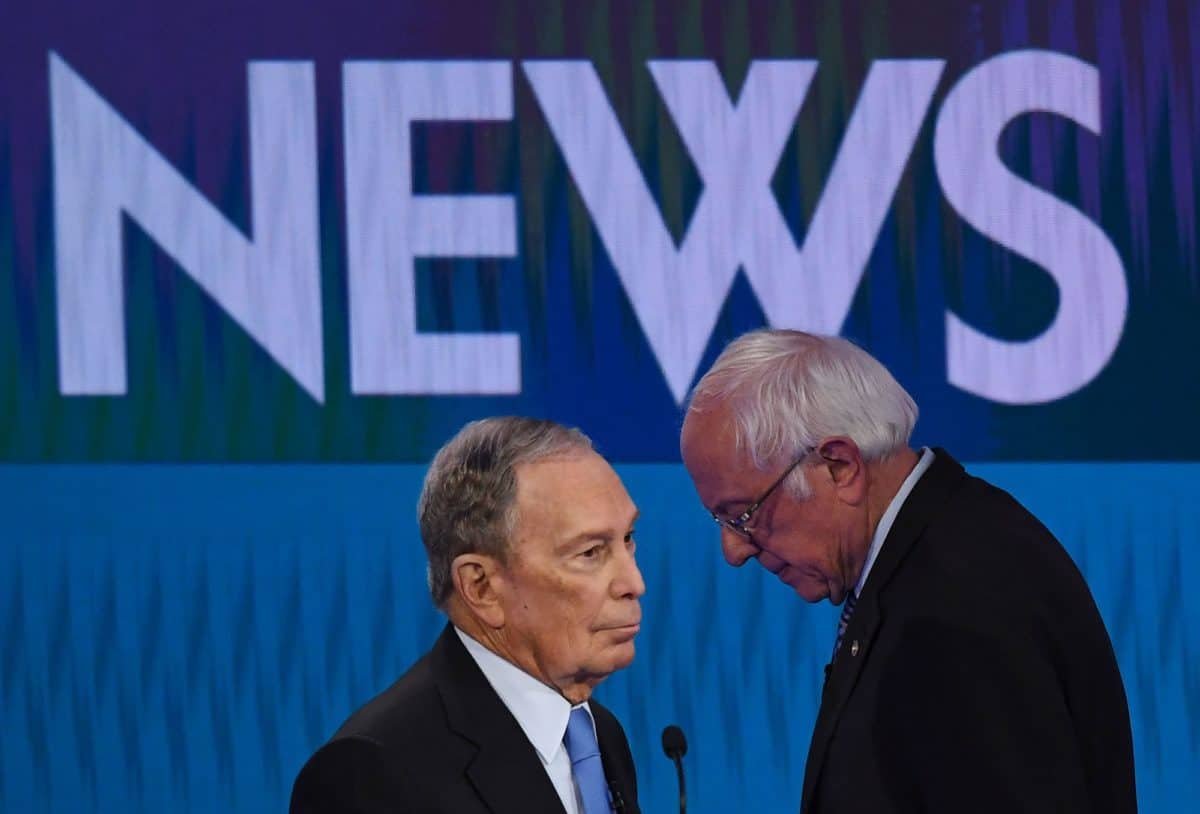 Dow futures fell around 100 points to 29,244 Wednesday evening as the Democratic debate in Nevada sparked a violent reaction in betting odds that pushed Bernie Sanders above a 50% chance to win the nomination for the first time. The catalyst for this move was a devastating onslaught against Mike Bloomberg, led by Elizabeth Warren, which sent the former mayors odds crashing.

The stock market has been confident that Donald Trump will secure reelection for some time. In addition to this, the rise of former New York City Mayor Mike Bloomberg also had Dow bulls hoping that a moderate candidate might stand a chance of winning the Democratic nomination.

Unfortunately, those dreams seem to have imploded as Bernie Sanders delivered a dominant performance in Nevada. At the same time, Bloomberg, making his first appearance in a debate, took heavy blow after heavy blow.

The damage to the billionaire’s prospects was immediately apparent in the betting odds, as a flash crash ensued.

Mike Bloomberg’s Campaign May Be Over

Pinpointing the precise moment that Bloomberg’s campaign may have ended, a carefully targeted question from an MSNBC moderator about sexual harassment allegations teed up Elizabeth Warren to go on the attack, with the following,

“Mr. Mayor, are you willing to release all of those women from those nondisclosure agreements? So we can hear their side of the story?”

You could then feel the entire Democratic establishment’s jaws drop as the billionaire made the following retort,

As Bloomberg floundered, Sanders’ own betting odds did something equally significant, rising above 50% for the first time.

The Dow Jones will open to Bernie Sanders as more likely than not to win the Democratic nomination, the first time this has happened since the race began.

The Dow Jones Still Looks Complacent To A Sanders 2020 Ticket

Given how frightened Wall Street is of a Bernie Sanders presidency, it remains to be seen how much longer the stock market can ignore his rise. Billionaire Leon Cooperman recently called the Senator from Vermont a more significant threat to the stock market “than the coronavirus.”

Openly in favor of tackling corporate greed, Sanders wants to tax extreme wealth and reform the U.S. healthcare industry. This makes him public enemy No.1 for a bubbly Dow Jones pumped up by years of Donald Trump’s deregulation efforts.

Given that Trump was a massive outsider to win the presidency, it seems likely that more risk premium needs to be priced into the Dow Jones if Sanders is on the ballot in November. Several national polls still have him beating Trump in a general election.

Given that the president’s best chance of reelection lies in the continued rise of the Dow, the runaway success of Bernie Sanders might not be as beneficial to him as his campaign believes.