0Shares
Contents hide
1 A hot potato: Motorola is standing by the durability of its newly minted Razr foldable smartphone after a questionable torture test from CNET cast it in an unfavorable light. But was this really a fair analysis?
2 Related Reads

A hot potato: Motorola is standing by the durability of its newly minted Razr foldable smartphone after a questionable torture test from CNET cast it in an unfavorable light. But was this really a fair analysis?

The publication recently strapped a retail version of the Motorola Razr to a mechanical test device called the FoldBot. This robot, borrowed from the folks at warranty service provider SquareTrade, was designed specifically to simulate the opening and closing of the hinge on the Samsung Galaxy, not the Moto Razr. CNET admitted as much in its test yet still, decided to forge ahead.

The plan was to livestream the entire testing process, all 12+ hours and 100,000 folds. Unfortunately, the Razr barely made it a quarter of the way through the torture test before the hinge mechanism failed.

But was this test really fair? Motorola doesn’t think so, and neither do I.

In a statement issued to Engadget and other publications, a Motorola spokesperson said SquareTrade’s FoldBot is simply not designed to test their device. “Therefore, any tests run utilizing this machine will put undue stress on the hinge and not allow the phone to open and close as intended, making the test inaccurate,” the spokesperson added. And they are right.

This is just my own theory, but it seems to be backed up by Motorola’s test footage. When you open and close the company’s clamshell, it needs a tiny bit of room for the two slabs to move, similar to how the screen ever-so-slightly tucks into the chin when you close it.

It appears as though the FoldBot doesn’t permit adequate movement, instead moving the slabs along a fixed path with each open and close. This restriction could have easily contributed to why the hinge failed so quickly.

Notice in Motorola’s test footage how the robot opens and closes the lid without putting any restriction on its movement. One arm simply flips the lid open while a separate arm closes it, just as a user would. Rinse and repeat. It’s much more indicative of real-world usage.

Anyway, back to the evidence. The video you likely saw is titled, “See the moment Moto’s Razr stops after 27,000 folds” but even that is misleading as the clip starts with the phone already out of the machine and making some horrendous noises. To see the actual moment it became apparent that something was wrong, you have to watch the livestreamed video.

At around the 3:35:11 mark, CNET’s Chris Parker gets on the mic for the four-hour check-in. At roughly 3:35:50, right before the FoldBot’s counter passes 27,200 folds, something happens and the machine stops being able to fully fold the phone. Parker recognizes this and powers down the machine at 3:35:59. He proceeds to take the Razr off the machine, folds it manually several times and even powers it on to make sure it works. It creaks a little – maybe more so than earlier on – but all seems well otherwise, so they continue on.

At 3:39:47, Parker attempts to load the phone back into the torture machine but struggles to get it aligned properly. At 3:41:34, he turns the machine back on but it is unable to cycle properly as the phone isn’t correctly aligned. The phone’s position is adjusted multiple times and the machine is even put into full speed, but alas, it can’t fold it.

Inexplicably, Parker even takes the Razr out and inserts it backwards into the FoldBot, at 3:45:40. No luck.

After more adjustments, it comes back out at 3:47:54. The FoldBot is then turned on to make sure it is working (it is) and during this time, Parker manually folds the Razr, starting at 3:48:05, several more times – seemingly without incident – before sensing that something may be wrong seconds later, at 3:48:12. 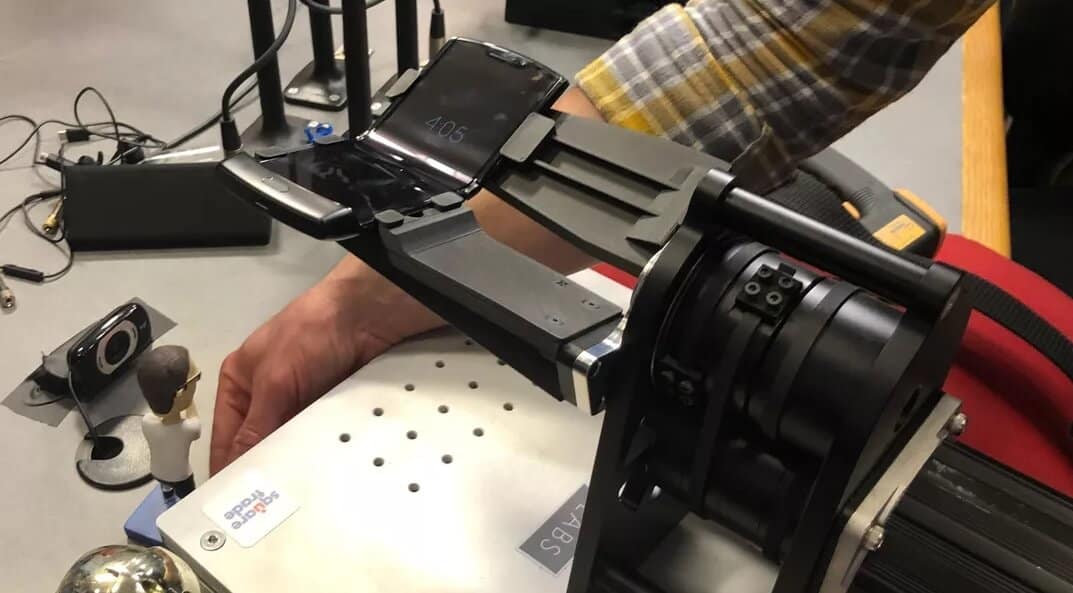 So what are the takeaways here? Well for one, CNET’s test wasn’t very professional. They used a testing robot that was designed for a different phone, albeit with modifications to accommodate the Razr. The rig is also designed in a manner that if the Razr isn’t positioned perfectly, the bot can’t complete a cycle, likely putting unjust stress on the hinge. This is evident from the very beginning, 17:37, as the phone is misaligned and has to be repositioned.

What’s more, the bot doesn’t open and close fully as it does in Motorola’s testing video. I don’t know if that is good or bad, but it is worth pointing out.

Another observation is the fact that the bot seems to be doing a much better job early on in the testing, say around the 22-minute mark. If you skip ahead to, say 30:18 in the YouTube video, it appears as if the bot isn’t folding completely on every cycle. You can try setting YouTube’s playback speed to 0.25x to see this better.

The team noticed this at around 33:30 and made some adjustments, but was the damage already done?

Despite the trial-and-error, the fold counter kept climbing. The publication acknowledged that the counter wasn’t entirely accurate, but again, it’s something worth noting for those that didn’t watch the entire four-hour video.

Another concern is that CNET took the phone off the bot – and reinserted it – multiple times during the course of testing and struggled to get it aligned properly each time. Again, this is more unjust stress on the hinge mechanism.

Yet another thing worth mentioning is the cycle speed. CNET said that at full tilt, the bot opens and closes the phone 2.5 times per second. This isn’t representative of actual use and the constant cycling could have created excess heat within the hinge that would not be experienced during normal use.

CNET published a video on Saturday morning titled, “See what went wrong in our Moto Razr fold test,” but even this is edited in a way that doesn’t illustrate what truly transpired.

Parker did say, however, that, “to say this phone is broken at this point is a little bit of an overstatement but it certainly isn’t working the way it was designed to work.”