It’s still early days, but right now it is clear some people are, unfortunately, using BTC for extreme wrongdoing.

Although the government’s own US dollar is also used for criminal activity, the authorities still have to go after bad bitcoin actors with perseverance.

Charlie Shrem and the allegations

It’s been made clear the crimes that Shrem is alleged to have committed were threefold: one count of conspiring to commit money laundering, one count of operating an unlicensed money transmitting business and one count of wilfully failing to file a suspicious activity report.

This type of reporting is something Shrem was responsible for as a compliance officer for his company BitInstant. The company helped customers move USD into bitcoin, acting as a third-party processor for BTC-specific transactions.

It was Shrem’s responsibility to report any suspicious financial activities on BitInstant to the Financial Crimes Enforcement Network (FinCEN), an arm of the US Treasury.

Instead, he knowingly helped a co-conspirator Robert Faiella, who was going under the name “BTCKing”. Faiella basically operated an unlicensed bitcoin exchange in order to facilitate the purchase of illegal goods on Silk Road, where BTC was the only accepted form of payment.

It doesn’t make sense, then, that someone like Rick Falkvinge could call the Shrem case a “harassment arrest”.

Falkvinge, whose professional work consists of being a political evangelist of the Pirate Party and the pirate movement in general, is basically sensationalizing this highly complex matter.

“This is a harassment arrest apparently intended to intimidate and associate ‘bitcoin’, ‘silk road’, ‘drugs’, and ‘money laundering’ with each other,” Falkvinge writes on his website.

Based on the complaint that the federal government has compiled, Shrem knew what he was doing in regards to his relationship with Faiella. If the allegations are true, it’s Shrem’s fault bitcoin, silk road, drugs and money laundering have again been linked.

The reality is, it is Shrem’s alleged negligence, not the government’s actions, that got him into his current precarious position.

There’s not much Falkvinge can do except offer his own revisionist version of what money laundering means in order to prove his point:

“Money laundering is specifically when you take actions to turn black money into white, and not when you sell white money to somebody else and they turn it black without your consent.”

That’s perhaps too specific a definition that is tailored to his agenda. According to FinCEN, money laundering:

“Involves disguising financial assets so they can be used without detection of the illegal activity that produced them.”

It appears that Falvinge is twisting the definition towards his own ideals.

During the regulatory panel at the North American Bitcoin Conference, Carol Van Cleef, a partner at law firm Patton Boggs, talked about the issues banks have with keeping in check their “customer’s customer”. 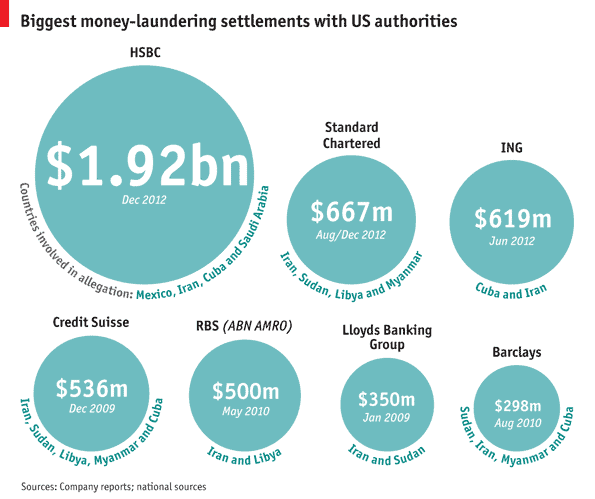 Biggest money laundering settlements are all by banks. Source: Economist

The reasoning for this is simple. In his criminal case, Shrem was supposedly safeguarding Faiella, which was the customer’s customer of BitInstant’s cash payment processor.

If the allegations are true, that’s disguising financial assets, which is what FinCEN is consistently trying to root out of the system.

As the compliance officer of BitInstant, he should have at least filed a suspicious activity report about Faiella, which he did not do.

“This had nothing to do with bitcoin; it appears to have had everything to do with ignoring your responsibilities as a chief compliance officer and failing to monitor and report certain transactions that would have triggered suspicious activity reports under the BSA [Bank Secrecy Act],” said Andy Beal, an attorney with Crowley Strategy who has reviewed the complaint himself.

Indeed, the unsealing of the documents by the the United States Attorneys Office make clear it was Shrem’s job specifically to comply with the BSA.

That Act gives FinCEN the authority under the auspices of the US Treasury to “determine emerging trends and methods in money laundering and other financial crimes”, according to the FinCEN website.

“Drug law enforcement’s job is to investigate and identify those who abet the illicit drug trade at all levels of production and distribution including those lining their own pockets by feigning ignorance of any wrong doing and turning a blind eye,” the government’s press release that came out announcing the arrest of Shrem and Faiella pointed out.

People have claimed financial crimes have no victims. The problem is usually that these crimes are often so abstract it is difficult to pinpoint the exact injustice a person is caused through financial subterfuge. But the reality is, this isn’t always true.

Sure, it’s sometimes hard to directly identify a person that has suffered because of the cleansing of illegal money, but in the Charlie Shrem case, there actually are a number of people who are obviously affected within the bitcoin community. 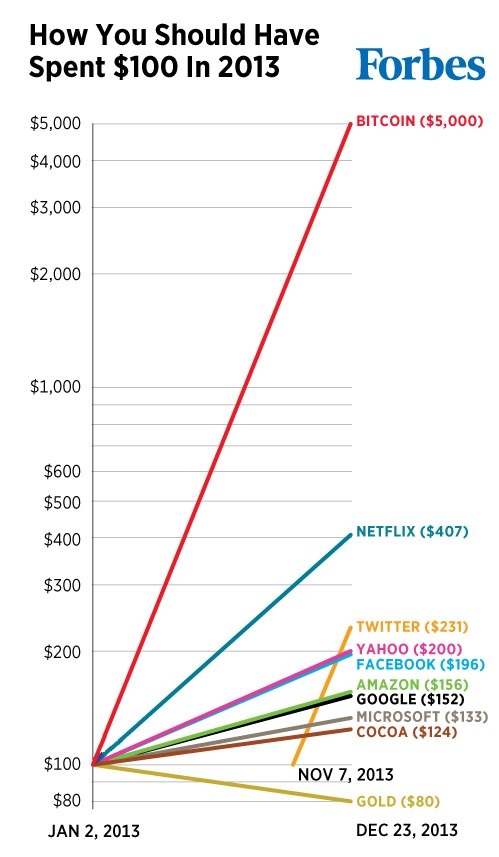 Bitcoin has been a meteorically rising investment asset despite its obvious risks. Source: Forbes

Shrem was vice chairman of the Bitcoin Foundation. According to his Twitter feed, he was regularly speaking at events evangelizing bitcoin and he was supposed to speak in Miami at the recent North American Bitcoin Conference.

Bitcoin has a long way to go to reach credibility to a mainstream audience. As a result, Shrem’s alleged crimes are a detriment to everyone who is trying to build positive rapport within the cryptocurrency space.

There is a likelihood that more people will be charged with crimes that use these currencies as a tool for illegal activity.

Undercover agents were buying bitcoin from “BTCKing” Robert Faiella as far back as August of 2012. There can be no illusions that the government is still conducting undercover operations to root out BTC-related criminal activity, just look at what the government’s press release announcing Shrem’s arrest said:

“We will aggressively pursue those who would coopt new forms of currency for illicit purposes.”

That includes bitcoin, whether people like it or not.

Money on line image via Shutterstock

A previous version of this article stated Shrem was arrested on Monday 27th January. The press release from the Southern District of New York states the arrest took place the previous day.