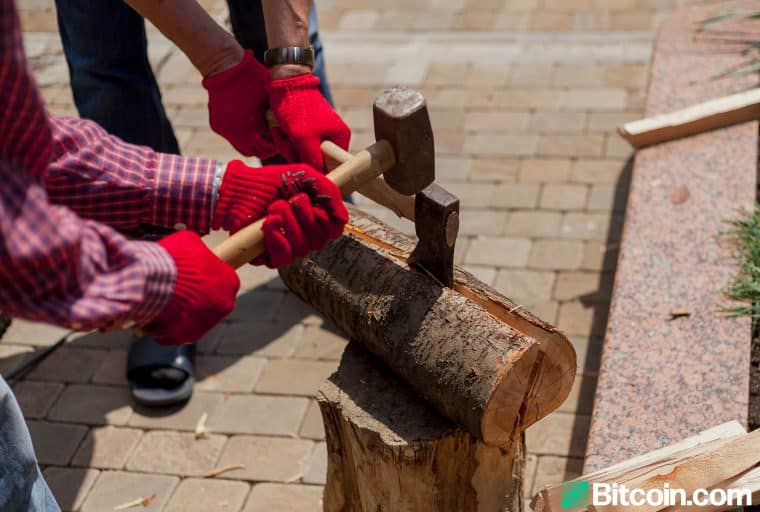 The block reward halving for BTC is 32 days away and crypto businesses and mining operations are steadily preparing for the event. Today, Bitcoin’s hashrate is hovering just above 100 exahash per second (EH/s) and one year after the 2016 halving, the digital asset’s price and hashrate climbed over 240%. Moreover, a recent poll published by Genesis Mining indicates that 50% of bitcoin miners expect to see BTC’s price increase after the halving.

Contents hide
1 50% of Miners Polled Believe Bitcoin Will See a Price Increase After the Next Halving
2 Exponential Hashrate and Price Jumps Followed the Last Two Bitcoin Halvings
2.1 Tags in this story

When Satoshi Nakamoto designed the Bitcoin network, he created a system that cuts the block reward in half every 210,000 blocks (4 years). The infrastructure is predictable by design and we know that the BTC inflation rate will drop from 3.6% to 1.8% per annum after the halving in 32 days. The bitcoin halving is expected to happen on or around May 13, 2020, and there will be 63 halvings remaining after this one.

The Bitcoin Cash (BCH) halving took place on April 8 and the Bitcoinsv (BSV) reward reduction happened 24 hours later. At the time of publication, miners hashing away at the BTC chain have around 110 EH/s dedicated to the network. With a month left to go, many BTC supporters think that the halving will make the price rise higher due to the natural effects of scarcity mixed with current demand.

On April 7, the mining operation Genesis Mining published a research report that polls a slew of dedicated SHA256 miners’ opinions. The survey was done on March 17, and 750 respondents participated in the Genesis Mining study called “The State of Crypto Mining.” According to the survey, 293 participants or 39.1% said that they mine from home by purchasing their own mining rigs and managing hashrate from their homestead. Even though bitcoin mining is steadily becoming industrialized by large server farms and mining pools, roughly “one third believed that power will shift from large centralized groups to smaller home miners.” As far as the BTC halving is concerned, more than half of the Genesis Mining poll respondents think the price of BTC will rise after the reward reduction. The poll states:

50% of miners expect to see the price increase after the next halving.

In another report written by the data analytics and intelligence firm Xangle, the research explains some finer details about the last two halvings, the one at block 630,000, and the 2024 halving at block 840,000. Xangle’s findings show that since the first halving on November 28, 2012, the price of BTC soared by 8069% one year after the event. One year after the second halving on July 9, 2016, BTC’s price jumped by 284%. “Transaction volume soared before each halving event, but with low correlation to price,” Xangle researchers noted. Further, the study also highlights that out of all the market participants involved with BTC, miners were the “most affected” after both halvings.

Still, BTC’s hashrate jumped exponentially after the past two reward reductions. A year after the 2012 halving, the overall SHA256 hashrate had risen by 19,766%. 12 months after the 2016 block subsidy reduction, BTC’s hashrate grew 248%. Despite the major price and hashrate increases BTC witnessed after each halving, Xangle’s researchers warn that the third halving might be different.

“Pay attention to the hash rate change after the third halving event, as uncertain market conditions can be a variable this time around,” Xangle underlined. “The global financial market, including crypto, has been through a lot lately (high volatility, covid-19). Hashrate has already been adjusted after the recent price plunge,” the data analysts conceded.

Many crypto influencers think that the past halvings have shown that the price after the 2020 halving should rise significantly. “Within two years after the next halving, the price of bitcoin will surpass $100,000 and rise to $500,000 when it crosses the gold watch gun,” Bobby Lee, the founder of the cold storage cryptocurrency card company Ballet told the press last year. “Historically, we saw a price surge in the 1.5 years after the halving, so it’s highly possible we’ll see new entrants in the market,” Kraken’s COO Dave Ripley explained on April 7. So far, BTC took a big hit on March 12 otherwise known as ‘Black Thursday,’ but has since risen by 80% since then. For the past few days, BTC prices were above the $7K region but prices dropped below the $7K zone on Friday.

What do you think about the upcoming BTC halving? Let us know in the comments below.