NEW YORK, May 31, 2022 (GLOBE NEWSWIRE) — Apex, a true Node-as-a-Service provider, will build a fully insured bridge from Avalanche to the XRP Ledger (XRPL), to go public by the end of August 2022. ApexBridge is fully insured by UnoRe, a decentralized insurance and reinsurance platform, and powered by Catoshi’s revolutionary Bridging Technology. 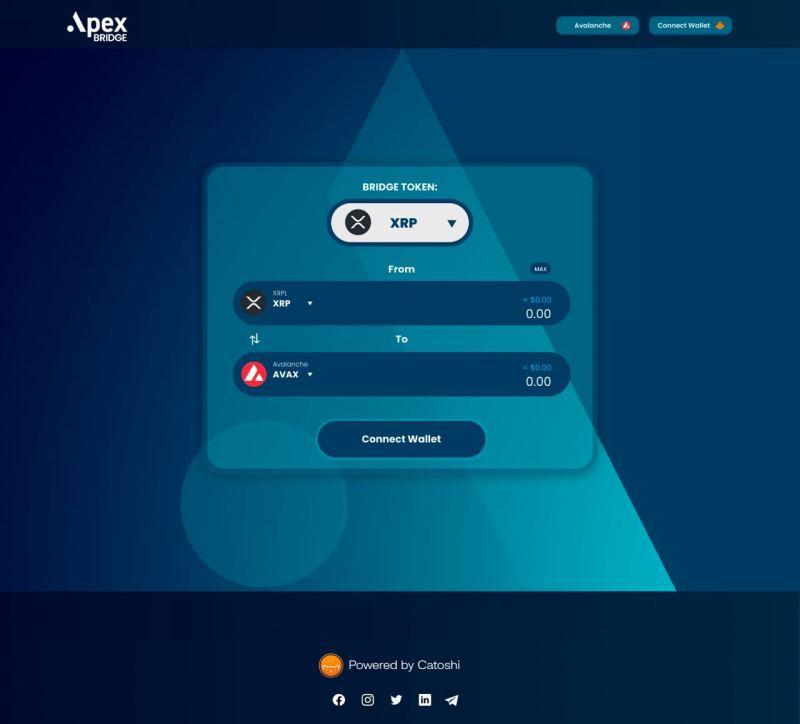 ApexBridge will facilitate a fast and safe transfer of XRP tokens from the XRP Ledger (XRPL), an open-source, public and decentralized blockchain, to Avalanche and other EVM (Ethereum Virtual Machine) networks. Apex and Catoshi will collaborate to ensure the bridges reach the highest possible standard. Before going live, ApexBridge will undergo thorough audits by UnoRe and Certik, plus extensive penetration tests via Halbourne. The bridge will be open to all DEXs and DeFi protocols through API kits to XRPL to ensure seamless integration of its dApps.

Catoshi’s bridges are currently using a lock/unlock mechanism with node scripts. At present, the bridges are more centralized (this is the safest way to ensure fewer vectors of attack). In phase 2, we will be using the highest standard technology to decentralize the bridge in the most efficient and safest manner. Decentralization cannot be taken lightly and the team will ensure that this process is thoroughly tested and developed. When decentralized, the safety of the bridge will be of the standard of the current centralized model.

“The tripartite partnership of Catoshi, Apex, and UNO is starting to make real waves in the space. It’s incredible to see all our hard work and graft coming to fruition, culminating in XRP’s integration. It really legitimizes our efforts having such an established project connecting with us. As one of the big 5 projects in the space we believe this partnership will help drive us to the higher echelons of success in this space,” Joshua, CEO of Catoshi.

Furthermore, an allocation of Apex Nodes will act as de facto nodes operating on the bridge thus increasing decentralization and security, and reducing latency to allow transactions to be processed faster.

UnoRe plans to work with Apex, Catoshi, and XRPL to insure the tokens on ApexBridge. Since bridges are a popular target for attacks, insurance of the assets on the Bridge will increase liquidity on the bridge due to increased adoption and as a result further drive down gas fees.

“Bridges are by their nature prone to a number of vulnerabilities – cross-chain protocols being as necessary to mass adoption of DeFi as they are, we believe that this sector of the Crypto space particularly needs adequate insurance to truly guarantee the safety of users’ assets. That’s why Uno Re is very excited to be protecting the ApexBridge between Avalanche and XRP,” Jaskanwar Singh, CEO, Uno Re.

Once the bridge is deployed, Apex will be opening up Wrapped XRP (wXRP) on ApexSwap, a first in the Avalanche ecosystem. Apex also has further plans to launch its nodes on the XRP Ledger.

“Apex is excited to launch on the XRP Ledger” said Tom Barr, CEO of Apex. “This is yet another novel cross-chain bridging project, partnering with UnoRe and Catoshi for its creation and full insurance.”

Apex is a true Node as a Service (NaaS) protocol built on the Avalanche blockchain, and offers developer tools and infrastructure to set up and manage the nodes connected to the network. Apex deploys nodes for a wide range of blockchains and empowers these networks by increasing the decentralization and security of these blockchains including Arweave, Avalanche, Ethereum, and the Bitcoin Lightning Network. Apex Nodes have a 100% uptime, are infinitely scalable, and instantly available.

Launched in 2012, the XRP Ledger (XRPL) is an open-source, permissionless and decentralized blockchain. It is low-cost ($0.0002 to transact), fast (settling transactions in 3-5 seconds), scalable (1,500 transactions per second) and inherently green (carbon-neutral and energy-efficient). The XRP Ledger also features the first decentralized exchange (DEX) and custom tokenization capabilities built into the protocol. Deployed in 2012, the XRPL supports enterprises and Python, Java, and JavaScript developers with powerful utility and flexibility. Alongside its native coin, XRP, the XRP Ledger is used by developers to create solutions that solve inefficiencies, including remittance and asset tokenization.

UnoRe is the world’s first decentralized insurance and reinsurance platform, built on the Polkadot blockchain, making it easy for users to benefit from trading and investing in the reinsurance market. Powered by an AI-based algorithm, the platform allows regular users to buy coverage for any assets held in their wallets, which traditionally requires high capital to invest.

Catoshi is a cross-chain bridge, positioned to be a major force in cross-chain compatibility. It allows Catoshi tokens to operate on various chains including Binance Smart Chain, Ethereum, Avalanche, Polygon, and XRP Ledger. With a focus on DeFi, it provides the safest security and soon to allow its token holders the ability to earn tokens from all bridged projects through a stacking pool.