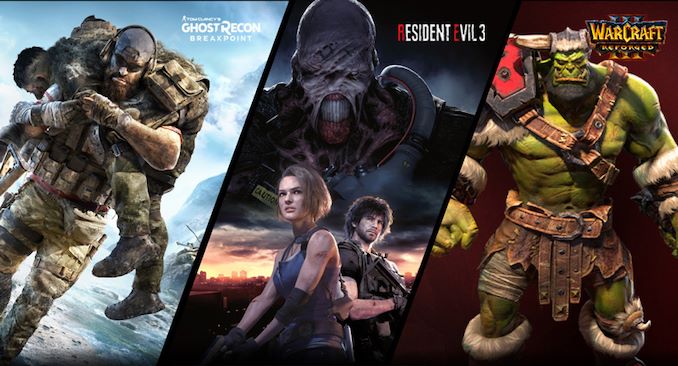 Following last month’s launch of the new Radeon RX 5600 series of video cards, AMD is not done tweaking their product stacks quite yet. Today the company is launching an updated series of Raise The Bar game bundles, which will see multiple games bundled with both Radeon RX 5500 and RX 5700 series cards, as well as OEM systems including those cards.

AMD’s latest game bundle is one of the biggest ones in a while from the GPU manufacturer, and is a bit surprising in just how many games they’re bundling with the cheaper Radeon RX 5500 XT. The updated bundle sees the value line of cards come with three games: Resident Evil 3, Warcraft III: Reforged, and Tom Clancy’s Ghost Recon Breakpoint. For the RX 5500 this replaces the earlier bundle that was in place when that card launched in December, and is a notably larger bundle than that single-game Monster Hunter World offer.

Meanwhile the Radeon RX 5700 series gets a game bundle as well, but one that’s not quite so lucrative. The RX 5700 series now comes with Monster Hunter World: Iceborn Master Edition, as well as Resident Evil 3. AMD’s high-end cards haven’t previously been offered with a proper game bundle, so this is a first for those cards.

Along with discrete video card purchases, these bundles are valid for OEM systems as well. So as with standalone cards, AMD’s partners will also be bundling these games with desktops and laptops that are using 5500/5700 series video cards, including the Radeon RX 5500M series.

In fact, the only current-generation Radeon product that’s not getting covered by a new bundle is the recently-launched Radeon RX 5600 series. The cheapest of the Navi 10-based cards, AMD has been playing a very careful game there to grab a piece of the mainstream video card market without undermining their own pricing and profit margins by too much. So it would seem that AMD is happy to leave the RX 5600 XT where it is, without a bundle.

Overall, AMD’s latest bundle seems to be a reaction to recent launches and price cuts within the GPU sphere. The launch of the Radeon RX 5600 XT combined with NVIDIA’s recent price cut to the GeForce RTX 2060 has put a lot of pressure on the market, especially around the $300 price point. And while the affected AMD cards are all well above or below this point, it may be a sign that AMD is a bit worried about what these events mean for their other cards, leading to the company taking some steps to improve their value propositions without making significant price adjustments.

The current bundle offers are set to run through April 25th, 2020, or until AMD runs out of vouchers. As always, you can check AMD’s website for a complete list of participating retailers and OEMs, along with information on how to redeem the vouchers.

Dogecoin (DOGE) $ 0.067488
We use cookies to personalise content and ads, to provide social media features and to analyse our traffic. We also share information about your use of our site with our social media, advertising and analytics partners who may combine it with other information that you’ve provided to them or that they’ve collected from your use of their services.
Accept
Read more
Change Settings
Cookie Box Settings
Cookie Box Settings