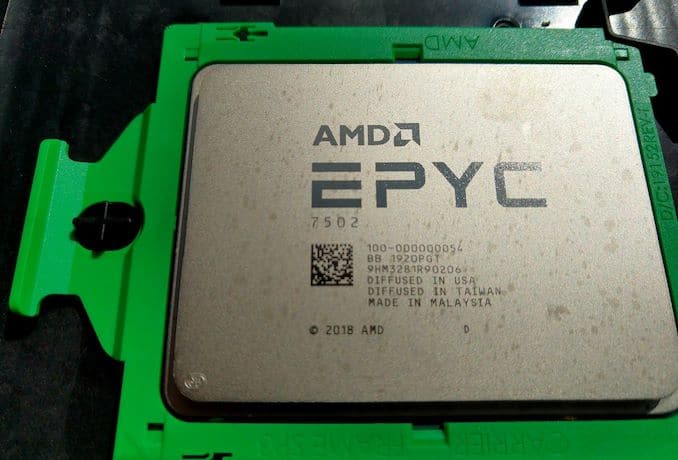 Today AMD has added two new processors into the EPYC lineup: the EPYC 7662, its fifth 64-core CPU for applications that need loads of cores, as well as the EPYC 7532, a 32-core CPU for programs that can take advantage of a large L3 cache. Dell and Supermicro are already signed up to use these new chips, and other system builders will be sure to follow.

Like AMD’s other 64 core EPYC processors, the EPYC 7662 processor is a 64 core part with 256 MB of L3 cache. Intended to serve as a cheaper 64 core option for customers, the new processor comes in a tier lower than AMD’s existing chips, and fittingly it has the lowest clockspeeds with a base clock of just 2.0 GHz, while the chip can boost to 3.3 GHz. Meanwhile, the TDP is rated for 225W, which is typical for many higher-end EPYC SKUs, but also higher than the 200W 7702 above it. In essence, we’re looking at a less power efficient SKU for those parties who want to save some money on hardware at the cost of greater cooling needs and power consumption.

Meanwhile AMD’s other new chip is the 32 core EPYC 7532. This chip is clocked at 2.4 GHz base while turboing to 3.3 GHz; but more importantly, it offers something not found on any other 32 core EPYC SKU: 256 MB of L3 cache. This allows the 7532 to fill the large cache niche that AMD and other server vendors always produce an SKU or two for, with the souped-up chip offering 8 MB of L3 cache per core instead of the normal 4 MB. Depending on the workload, a large cache configuration can help a program maximize its performance in cache sensitive applications, such as ANSYS CFX benchmarks, as well as its single-threaded/lightly-threaded performance in general that otherwise won’t benefit from more cores. The catch for AMD, in turn, is that building a 256 MB L3 SKU requires eight chiplets no matter how many cores it has, so the 7532 is still a full-chiplet design, just with half of the CPU cores disabled..

Like all the latest AMD EPYC processors, the new CPUs also feature 128 PCIe 4.0 lanes, support up to 4 TB of DDR4-3200 DRAM support, and have robust security capabilities.