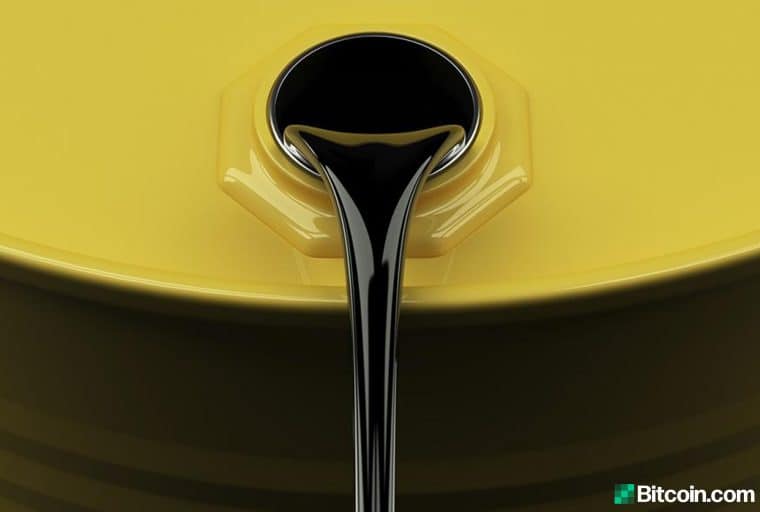 Global markets had a historical day on Monday, as the price of oil dropped below zero and closed the day at -$36 per barrel of crude. The oil crash below zero has never happened in anyone’s lifetime and economists worldwide are uncertain about the future of the world’s financial system going forward. The meltdown also caused global stock markets to slide significantly and traders offloaded equities and commodities with great fervor during the course of the day.

Contents hide
1 History Is Made: Oil Prices Plunge 300% Dropping Below Zero to Negative $36 per Barrel of Crude
2 After 11 Years of Saying Bitcoin Will Drop to Zero – Pundits Watch Liquid Gold Become Near Worthless
2.1 Tags in this story

History Is Made: Oil Prices Plunge 300% Dropping Below Zero to Negative $36 per Barrel of Crude

Oil prices plunged on Monday and desperate crude traders raced to sell contracts as fast as they could. Financial journalists couldn’t even keep up with the price of oil, as it slid below zero to -$36 per barrel by the end of the day. At present, the price of West Texas Intermediate (WTI) oil-based futures is up a hair but the prices of Western Canadian Select, Mars US, Coastal Grade, and ethanol prices are down considerably.

Wall street : Cryptocurrency is a scam. No stock ever will be as volatile as bitcoin.

The result of the negative plunge could be catastrophic to the economy, as oil futures converge with physical deliveries fueling the world’s industries. Oil traders sold massive amounts of contracts on Monday afternoon, liquidating physical deliveries scheduled for May. Meanwhile, the price of the classic safe-haven asset gold has been riding just below the $1,700 per ounce range. While the price of oil plunged, the gold bug and economist Peter Schiff said gold would follow a similar pattern as oil, but in reverse.

“What is happening now in the oil market will soon happen in reverse in the gold market,” Schiff tweeted on Monday.

Remember when Bitcoin was a risky investment?
Good times.#Oil

On Tuesday morning, well before the New York Stock Exchange (NYSE) opening bell, futures look extremely dreary and analysts are predicting the Dow Jones to slide another 300 points. The drop in oil below zero follows the last 11 years of pundits saying that cryptocurrencies would never last and bitcoin would drop to zero. A great example of this point of view is the 380 bitcoin obituaries headlines that have been published time and time again over the years. Even Peter Schiff has said that the crypto economy and the price of bitcoin will someday trade at zero.

“These currencies are going to trade to zero or pretty close to it when the bubble pops. Right now, the only reason why people are buying bitcoin is because the price is going up. When it turns around, they are not going to sell it for the same reason,” Schiff said. 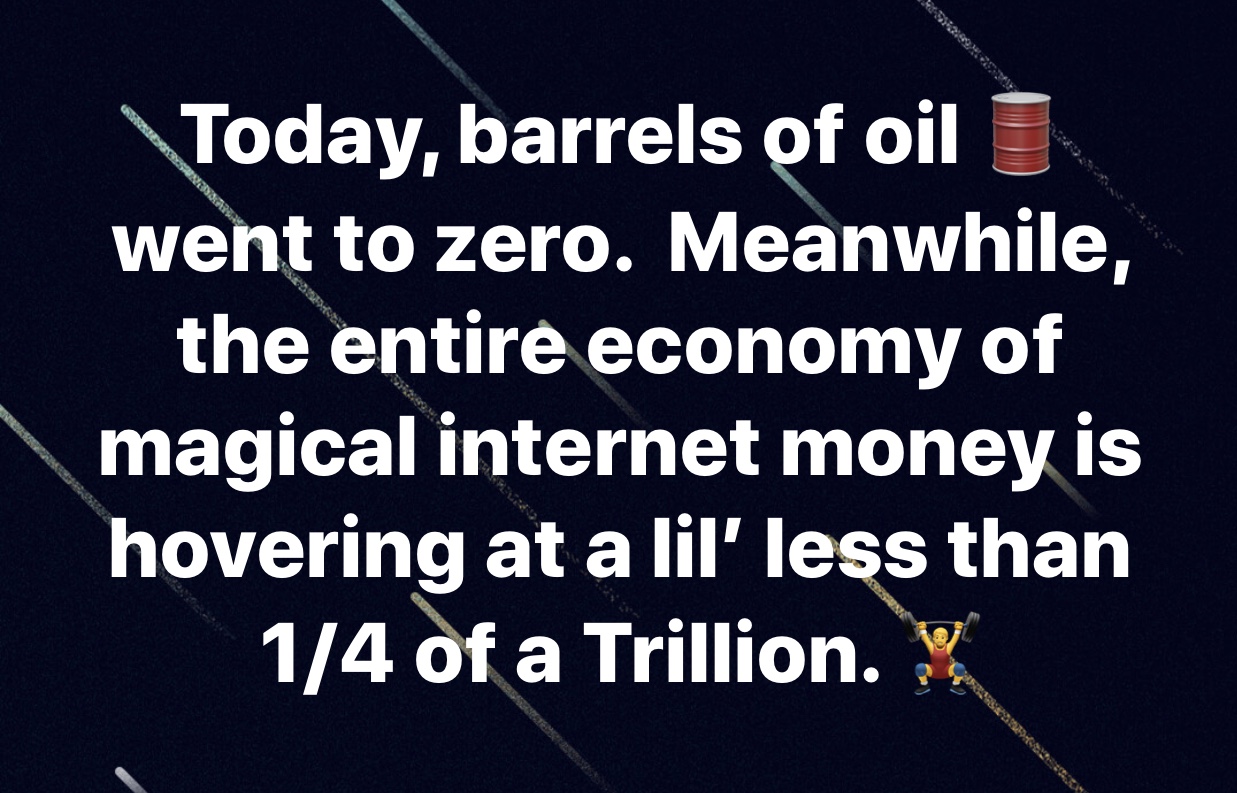 At the time of writing, the crypto economy is hovering between $195-200 billion, as markets did end up taking a slight hit on Monday during the oil fallout. BTC is trading for just above $6,800 per coin, ETH is swapping for $170 per unit, and bitcoin cash (BCH) is trading for $218 per BCH. Right now petroleum refineries and oil dealers are also running out of space to store the liquid gold and contract sales are slipping away fast.

Bitcoin: “I like to move up and down 5% every day for no apparent reason”

The lack of space has caused oil refineries to store oil charters out at sea and businesses like Glencore are now storing 3 million barrels of crude at sea. Glencore representatives would not comment on the move, but reports note that it costs them $37,000 a day and the vessel will be stored at sea for six months. Royal Dutch Shell is also allegedly storing oil on three supertankers at sea that hold 2 million barrels each. Sources say these oil firms are holding back since the recent OPEC deal failed and plan to wait until prices rise.

What do you think about barrels of crude oil dropping below zero on Monday? Let us know in the comments below.

Dogecoin (DOGE) $ 0.065987
We use cookies to personalise content and ads, to provide social media features and to analyse our traffic. We also share information about your use of our site with our social media, advertising and analytics partners who may combine it with other information that you’ve provided to them or that they’ve collected from your use of their services.
Accept
Read more
Change Settings
Cookie Box Settings
Cookie Box Settings